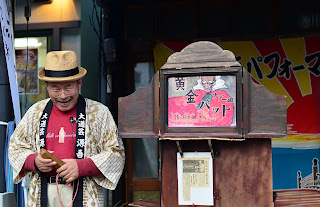 The World Kamishibai Day Celebrated its 20th Anniversary on Dec 7, 2021.

My daughter in Santa Barbara, California was surprised to hear about the celebration, claiming Kamishibai a lost art of storytelling. She should remember them from her preschool days in Japan, even though she did not spend much time there. She says she remembers seeing live theatrical performances called “Fairly Tales in the Park”. With a cast of 4-5 actors, this troop performed short plays for children at different parks. They were quite entertaining, dressing up as different characters and using props. It was much different from watching a movie or TV. I believe this performing group surprisingly still exists. I don’t recall ever taking my kids to see Kamishibai. When they were young, I took them to library programs and bookstore events before bookstores disappeared.

Kamishibai, the Japanese paper theater or picture story card show, once flourished during the depression years in the 1930’s that saved many unemployed adults, but disappeared at the advent of World War II. I sensed its revival while living overseas. 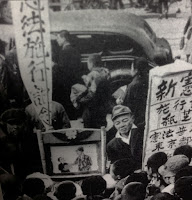 What I recollect about Kamishibai was how it demonstrated its power to communicate when the new Japanese Constitution was promulgated in 1948, using the old medium of popular entertainment to educate. An attentive street crowd was informed about important impending changes. The banner and sign advertised the new constitution coming into effect. The photo attached was taken from the famous book, Embracing Defeat by John Dower. Tokujiro Kanamori (1886-1959), State Minister under Prime Minister Shigeru Yoshida was strongly involved.

The latest World Kamishibai Day initiative promotes the idea that Kamishibai lessons can imprint unforgettable memories in children, invoking the same level of curiosity and enthusiasm from rivaling content on smartphones and tablets. 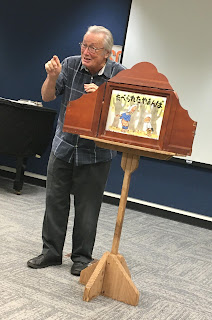 The San Diego Library “Rebellious Miss Breed” retrospective purportedly continues ‘from Sept 2021 to Jan 2022' and its Kamishibai special program was scheduled at the Rancho Bernardo public library on November 19. I asked my friends, the Kaneko family, living nearby, to attend if possible and report back. Kaneko-san attended with her son’s family, including grandchildren aged 8 and 6. To my and their disappointment, no Kamishibai plays related to Miss Breed were performed that day. However, the grandchildren seemed to have enjoyed them all. The following three Kamishibai were performed by Mr. Walter Ritter, the narrator/performer, surrounded by 10 adults and a dozen children that made up the audience.

According to Mr. Ritter, two Kamishibai stories related to Miss Breed are available. I tried looking for a performance date, but could not find any. They are Boy Tetsuzo, about whom I know and talked to person, and Fusa Tsumagari.

One of the most well-known original stories that was first performed using Kamishibai was Ogon Bat (The Golden Bat), a Japanese superhero created in 1931. The popular character eventually made the transition to manga and anime adaptations.