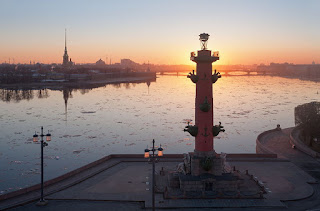 Pondering over who named "Yavara Neva" to the Sankt Petersburg Judo Club, my guess inevitably hit on President Putin, Judoka himself, who is familiar with the Japanese word Yawara (=Yavara) , beautifully adding it to the Mighty River Neva. Yawara is a synonym to Judo.  An ideal Judoka is gentle in appearance but sturdy in spirit – a person of real resilience. During  the '90s the Japanese comics or anime titled Yawara was a super hit depicting a fashionable Judo girl. It was written by Naoki Urasawa, an award-winning cartoonist.

Reportedly Putin began practicing Sambo (a Russian martial art without weapons) first, then switched to Judo at age 14, under his coach and mentor Anatoly Rakhlin. He participated in competitive tours and secured junior national ranking and a senior championship. He kept a blackbelt ranking higher than 4th degree and 9th dan at Taekwondo. When his mentor Anatoly passed away in 2013, he mourned for him as his second father in sports and in life and awarded him a medal of honor. Currently Yavara Sankt Petersburg is managed by Arkady and Boris Rotenburg brothers, both Judoka, who are close to Putin. In 2000, Putin visited Kodokan Judo Institute in Tokyo and met the grandson of the institute founder and legendary Judoka Jigoro Kano (1860-1938).  Kodokan conferred Putin 6th dan grade after testing.

Sitting together with two presidents, Putin and Battulga, both blackbelt Judokas, PM Abe joked that he would like to see them do a demonstration match. Since Abe does not practice Judo, he would gladly and quietly sit on the side and enjoy the match.  The joke was ignored but PM Abe's reference to the all Japan Judo Federation Vice Chair Yasuhiro Yamashita, who was the 1984 Olympic Judo Gold Medalist and 8 year unbeaten National champion, culminated in an unusual armor-clad warrior match, held in Kodokan, Tokyo in Sept 2017 (see article).

Russian Judo progress has been remarkable, thanks to President Putin's personal pitch and involvement, as evidenced with the recent Olympic medal rush of Gold, Silver and Copper in Sochi and Rio de Janeiro for both men and women. I look forward to seeing how they will perform in the upcoming Tokyo Olympics. 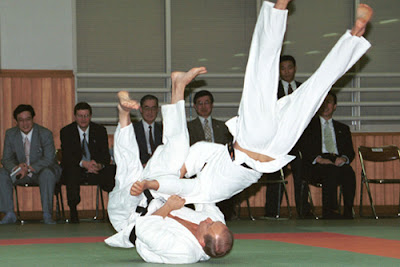 Posted by riodan at 3:57 AM No comments: