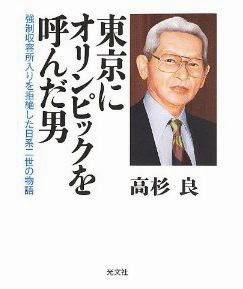 "Attempted but failed" was my understanding of what happened with the voluntary evacuation efforts by the Japanese Americans when Japan declared war against the Allied Forces in attacking Pearl Harbor. Ryo Takasugi's book on Fred (Isamu) Wada took me by surprise. The book, written a decade ago, was recently republished as The Man who Ushered in the (1964) Tokyo Olympics from Kobunsha. What caught me was its subtitle "The Story of an Issei Japanese Who Refused to go to the Concentration Camp."

The scene began in an affluent Chapultepec residence of Mexican General Jose de J. Clark Flores, then the Vice President of the IOC. Fred Wada visited General Clark as a special envoy representing the Tokyo Olympic Prep Board.

"I own ‘Farmer Fred's Market’ in Los Angeles. There are many Mexicans among our employees. So maybe OK for simple conversations."

General Clark softened with a smile.

"During the War, I was a farmer in Utah, as I didn't want to go to the camps."
"Sr. Wada, this is the first time I heard there were Japanese Americans who didn't go to the camps!"
"It's true, General. 130 of us went to Keetley, Utah. It was very wild and barren land. Masako and I had a hard time cultivating it!"

Fred, reminisced quietly awhile, and looked at Masako, his wife. The General stood impressed and shook Fred's hand and Masako's. This is the moment General Clark befriended Fred and eventually gave Tokyo, Japan his favorable voice and recommendation as the next Olympic site.

"130 Japanese Americans in Keetley, Utah!" Wow! First time I heard of this as well. I searched Keetley on Google. It was located about 60 kilometers east from Salt Lake City, and south close to Park City. It was once a mining town but is now submerged underwater in the Jordnanelle Reservoir since 1995. The Reservoir is north of Heber City. Both Park and Heber Cities belong to the same Wasatch (Native Indian word for Mountain Pass) County, aka Wasatch Back. Salt Lake City is aka Wasatch Front.

Upon hearing the news about Pearl Harbor, Fred Wada, a produce marketer in Oakland, felt that the evacuation of the Japanese Americans from the west coast was imminent. He had read in the paper that the State of Utah was short-handed in farming and traveled to Utah with Masako. With the help of a Japanese American acquaintance, he nailed down key people to talk to, participating in local farmers' assemblies and committing their allegiance to the U.S. Government. Although Duchesne (eastern Wasatch) was the only county which voiced assent, Wada felt there was a ray of hope. He sought the same Wasatch, but closer to Salt Lake City for marketing, struck the deal with George Fisher, the Mayor of Keetley, cattleman, and developer, for a 3800 acre land leasing agreement at $7000 a year when George offered his old housing facilities used for miners. Fred met Utah Governor Herb Maw before returning to Oakland, promising they would not be a burden to the state. Fred Wada made the right decision. I thought. Utah is known as a Mormon state, religiously homogeneous society. I wasn't sure if George Fisher was a Mormon, but Governor Maw was most likely a doyen (senior member), his words honored by most Utahans.

The Keetley Farm Colony plan was laid. Fred mustered like-minded colleagues and their families under the banner "Food for Victory." March 29, 1942 was the deadline they had to meet; otherwise they had to report for the enforced evacuation as per the Executive Order 9095.

The snow covered highland (1400 meters above sea level) and harsh winter (often down to 20 below zero) waited for their arrival, accompanied with racial animosity. As the community was setting up the hot bath they brought from Oakland, they were threatened with a dynamite explosion, which was triggered by the former mining dwellers that were requested to leave Keetley.

The Japanese Americans first busied themselves repairing the buildings in which they resided. Once the spring snow began to melt they cleared the sagebrush from the land, dug out the rocks by hand, and then began to plant a large truck garden with lettuce and strawberries. They raised chickens, pigs, and goats.

Their discovery when the snow thawed was disappointing. The arable land was 1/10th of the contracted 3800 acres, covered with ubiquitous stones. The deadly report, I read, 50 tons of stones hauled out of 150 acres. No machines were available then. All were done manually with sweat.

They didn't complain. They just went to work long and enduring hours. Once the farm was established, maintaining it was left to the wives and children while many of the men worked as laborers in sugar beet fields on surrounding farms. The first year's crops were presented to Governor Maw and made some Salt Lake City news, but later efforts were obstructed by the Anti-Japan road blockades. Fred had to switch to a less desirable neighboring market in Park and Heber Cities. The season was short, snow came in September. 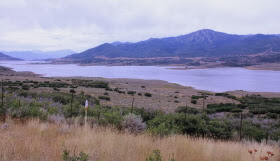 Fred narrowly broke even his first year, but the second year brought a serious crisis. 50 pigs they raised died of a sudden disease. Planning to use the land for sheep herding, Fred negotiated with Fisher for the second lease agreement. Fisher vetoed sheep herding, because of his adamant conviction that sheep spoil pastures. The negotiation failed. Details of the aftermath were not known, but the main workforce went into subcontracting, leaving the remaining families in Keetley until the war ended.

Fred moved his family to Murray, near Salt Lake City, leasing a 16 acre farm, where he could produce celery and onions year round.

What drove Fred to Utah, in my opinion, was l) his clairvoyance and entrepreneurship; 2) his faith in humanitarian creeds; 3) his quest to test his excellence in marketing. He no doubt believes men have no enemies if he spoke from his heart, allaying fears of others and even profiting from adversity. He also put his full confidence in the Mormons.

I don't know if he knew Governor Ralph Car of Colorado who might have welcomed them to Arizona instead of Utah. I have just read Colorado Governor Ralph Car who saved the Japanese Americans (Japanese title, translation 2013) written by Adam Schrager. The original title was the Principled Politician: the Governor who staked his political future on his Jap stand. Governor Car might have provided Fred with a better test site that would have made Fred's marketing a slam dunk. Who knows? 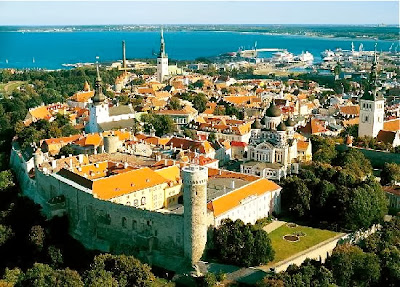 Kim, my Yokohama friend, a veteran skier (see Kim's Mont Blanc Ski Trek) headed for the Baltic Sea this time, because her ski trip got cancelled. This time she and a long time friend from school wanted to explore knitting and quilting in Estonia. Estonians make up the majority of the population and have rich cultural traditions - love of music, dance, choirs, folk arts, including colorful knitting and embroidery, probably still untouched and unseen by any Asians.

They started contacting possible knitters or schools who would accept them via the Internet and the effort paid off in friendly social networking and trips to inland, as well as beach cities, plus a couple of interesting off-shore islands. They flew to Helsinki and crossed to Tallinn on June 20 this year for a three week visit.

Kim, who knew I was in Tallinn, sought my advice, but my trip was a day excursion returning the same day. The only advice I could give was reminding her of the hour time difference between Helsinki and Tallinn. I‘m afraid I was one of those tourists that blindly recite the UNESCO designation that Tallinn represents Medieval Estonia. Yes, Tallinn, Tartu, Viljandi, Parnu, and Narva were among the listed Hanseatic/Teutonic cities, but Estonia soon became the battleground for centuries where Denmark, Germany, Russia, Sweden and Poland fought their many wars over controlling this important geographical position, with most of the Teutonic castles wrecked and ruined.

Swedish control did not last long because Russia defeated Sweden in the Great Northern War. The Russian revolution gave Estonia a good dispute and the Tartu Treaty in the early 1900s, but with the outburst of World War II, Russia annexed and suppressed Estonia for almost a century. Estonian independence came in 1992 when the compassionate human chain was formed among the Baltic three countries - Estonia, Lithuania and Latvia. Estonia joined EC in 2004 and has used the Euro since 2011. It is nicknamed today as the Baltic Tiger.

I am fascinated with Kim's travel photos and notes, realizing that you have to be out of Tallinn in order to know real Estonia, its diversity and hidden ethnic world. In hopping across the country, they used bus transportation which was more convenient than railroad. The bus was the right choice, leading to human interactions and warm hospitable receptions. Kim's party was greatly helped more than once by friendly drivers with a willingness to serve. For example, Kim dared to visit Koguva, a tiny village on Muhu Island, famous for the best preserved 18th/19th threshed barn house. Taking a bus to reach Koguva seemed challenging, particularly on the weekend. They were able to visit it with the voluntary help of the inn bus driver, who ferried them to the mainland.

I was told Estonians cherish the countryside and even urban dwellers maintain strong rural ties. Associating with their belief in the earth spirit**, I believe the Japanese and Estonians have a similar frame of mind.

I wish to congratulate the success of their venture and look forward to seeing their report on Estonian knitting.

1) Viljandi Academy of Culture merged with the University of Tartu in 2005. The UT VCA teaches professional higher education and performs applied research within information science, culture education and creative arts. The academy has about 1000 students, half of whom are open university students. Kristi Joeste, lecturer of Estonian native crafts met Kim and her friend and conducted an intensive workshop. Please visit Kristi's blog written in both Estonian and English.

2) The belief system of indigenous Estonians is called "Maausk" to which the Japanese concept "Satoyama" comes close.

3) Most Estonian island ferries carry buses and cars. Kim told me that the Baltic Sea freezes in winter, enabling cars to cross the ocean to small islands. Fantastic! Caution needed by keeping your direction fixed and being mindful of overall weight.