Okinawa and the Flame Tree 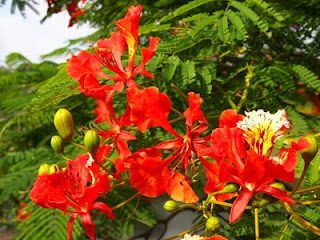 As area governor of Toastmasters, I have visited Okinawa a few times. There were two clubs, Kadena and Pacific Pearls, both on U.S. Marine Corps bases, around the turn of the century during the calm before Desert Storm, George Bush's Iraq War.

My first visit to Kadena coincided with a helicopter accident which was quite a tumultuous time. Having been stationed in the naval town of San Diego, close to Miramar and Montgomery (civil) airports, I encountered a few airplane accidents. One time, a navy jet fighter plunged into my plant's backyard. The pilot tried to maneuver out to the ocean in vain. He bailed out and landed safely and I heard he helped the plant crew extinguish the fire. The jet grazed a part of the plant roof, but luckily there were no loss of life.

On my return flight to Kyushu, I saw local papers denouncing the U.S. base helicopter accident, dangerous to off base citizens. Pacific Pearls used Camp Foster chapel for their meetings, but the chartering ceremony was held at Kadena Officer’s Club. Receiving an invitation, I flew to Okinawa for the first time. At the airport, I was given transportation by an air traffic control officer who wanted to join Toastmasters. At Kadena, I met a Marine Corps Colonel, the Club founder of Pacific Pearls (name sounded beautiful) who inducted the chartering with his excellent speech. Quite different from the Japanese way, families were also invited and it was fun to observe the very joyous celebration. The Colonel handed out candy to children first and then to all the participants. It was a very enjoyable Friday night.

Luckily, my friend from San Diego days was stationed in Naha, and he arranged for me to stay at the JT club in the guest house near the Fuzhou Chinese Garden. My stay in the historical heartland of Kumemura helped deepen my understanding of Okinawa. 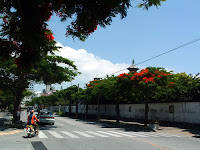 The following morning, the matron of the house suggested that I walk to the nearby Matsuyama Park and the Chinese Garden before my San Diego friend showed up to visit northern Nago. Matsuyama Park was a big park, located in central Naha, which was a venue for recreational sports, particularly tennis courts. I rambled around the entrance area with water fountain and shady trees of Chinese or Indian banyans. There were statues and epitaphs mourning for high school girls who died in the Okinawa wars.

My attention, however, was drawn to the burning red flame trees (poinciana regis) along Matsuyama Street, against the white walls of Fuzhou Garden. I saw the same trees in Mexico and Hawaii and it was quite a surprise to see them in the islands of Okinawa. The name came from a sacred bird of Chinese mythology, as the flower is shaped like a phoenix spreading its wings. According to mythology, the world has no wars, no storms, no floods, no earthquakes, when the phoenix flies.

Very recently, my Taiwan friend referred me to the book Flame Flowers Have All Fallen, written in 2011 by Sakuo Imabayashi (1923-), a Fukuoka citizen, a returnee from Tainan, Taiwan. Imabayashi was born and raised in Tainan and repatriated to Fukuoka at the end of World War II. He revisited Tainan in 1990 after almost half a century and said he was sorry that the Tainan of his youth all vanished, including the giant Chinese Banyan trees and burning red flame trees that shaded the streets from the Tainan RR Station to Tainan Downtown Circle. He analyzed the causes - exploding population, influx of cars, roads widened for increased traffic, vermin damages, street cleanup nuisance, etc.

I remembered immediately my Okinawa visit 10 years ago. I learned that the area was used for location of the recent movie Tempest (see Notes 1), depicting the declining period of the Ryukyu Kingdom and the woman-disguised eunuch's rendezvous with a Satsuma Samurai under a flame tree. I didn't know the floral language of the flame tree is melancholic love.

The two sister cities Naha and Fuzhou jointly created the Fuzhou Garden in 1992 to commemorate the 10th year anniversary of their relations. The garden was based on the basic design of Fuzhou architect. Most of the materials came from Fuzhou, and was completed with Fuzhou technicians' help and service. The area is 8,500 square meters (2.l acres), at the former location of the above mentioned girl’s high school, and destroyed during the war. Three famous mountains of Fuzhou are reflected in the miniature landscape and there is a statue of poet Li Pai holding a Sake cup. It is a very authentic garden in a quiet corner of a busy capital.

1. This Kumemura area is where Fujian immigrants settled and their descendents kept tributes to the Ming Dynasty. The Confucius Temple exists nearby. Naha was the commercial center while the Shuri Castle was the political center of hereditary King Sho, who had bitter experiences with Commodore Perry's contacts. King Sho became a Buddhist and a peace seeker. The Kingdom surrendered to the Satsuma clan in Kagoshima and finally yielded to Tokugawa Shogunate.

2. Both Kadena and Pacific Pearls were disbanded when the Iraq War re-erupted. Soldiers were sent to the Middle East. My current contacts with the previous club members are all women. In 2011, the Oki-Orators was newly established as a new Okinawa community Toastmasters. Good luck, Oki-Orators!

3. Joanne Oppenheim, author of Dear Miss Breed, wrote that it was the first time she saw what the poinciana flower looked like in my blog. She was familiar with the flower name from the old song sung by Bing Crosby, Frank Sinatra, Nat King Cole, Ahmad Jamal Trio, etc. I didn't know the song, so I checked it out. It goes like this:

"Poinciana, your branches speak to me of love,
Pale moon is casting shadows from above.
Poinciana, somehow I feel the jungle heat,
Within me there grows a rhythmic savage beat."

The music is by Nat Simon, lyrics by Buddy Bernier.

I found also the city named Poinciana in central Florida, near Orlando - an area that is growing rapidly.

4. According to Wikipedia, the flowering season differs in different countries. 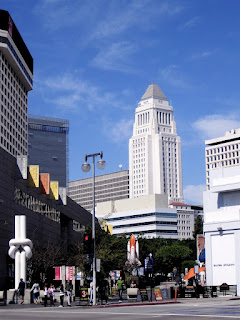 On my recent trip to Little Tokyo branch library in Los Angeles, notices for two fund-raising campaigns were posted - one to build a Ryoma Sakamoto statute and the other to save Bunichi Kagawa's poem epitaph.

Ryoma Sakamoto (1836-1867), a legendary Meiji Restoration icon, who attempted to organize a peaceful revolution, but instead was assassinated, is one of the best loved historical figures of Japan today. Ryoma, a visionary Samurai, who deserted Tosa-Clan, conceived the first trading company and ocean support fleet, and believed all men are created equal (he was most likely familiar with the U.S. Declaration of Independence). Some people may think Ryoma's statue in Little Tokyo is not necessary. However, the planning committee sent its mission to Japan and toured cities where Ryoma's statues currently stand, including Sapporo, Kyoto, Nagasaki, and, of course, Kochi, where Ryoma was born. The mission returned with the tour report and had a meeting in late February. My guess is that the Association of Immigrants from Kochi Prefecture is deeply involved.

Bunichi Kagawa (1904 -1981) was a poet, essayist, and critic who started concentration camp magazines in the Japanese language during World War II. His friends, supporters, and Nanka Bungei (Southern California literature publishers) collectively, raised $20,000 and built the poem epitaph on his behalf in one corner of Honda Plaza in January 2006, but is now in danger of removal by the death of the land owner, leading to a possible title transfer. On March 11, a multi-faceted meeting was held, which included Bunichi's poem recitation, local Japanese American children's poems encouraging 311 Tohoku Quake/Tsunami victims, lecture by Prof. Kumei of Shirayuri University in Chofu, Tokyo who stressed the pioneering role of Kagawa in Japanese immigrant's literature. 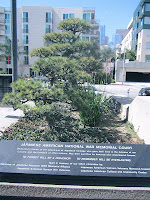 Little Tokyo has another rare statue we Japanese can no longer see in Japan, of Kinjiro Ninomiya as a teen, carrying firewood on this back and reading a book, symbolizing the virtue of diligence. Ninomiya later became a prominent 19th century agricultural leader. There are also World War ll and Korean War Memorials in the San Pedro street Memorial Court.

I read that the Community Redevelopment Agency and the CC&R requires developers to assign and fulfill 1.25% for public art and statues like Kinjiro, Isamu Noguchi's stone sculpture, Friendship Knot, Astrononaut Onizuka's Memorial, which should fall within the guidelines and they should include maintenance costs. I heard Bunichi Kagawa's poem epitaph costs $100 per month for maintenance. 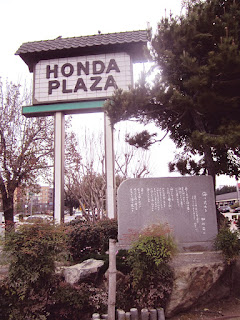 My daughter accompanied me to the Japanese American National Museum. We walked to Honda Plaza to see the Bunichi Kagawa's poem epitaph.

We found Kagawa's poem "The Sea Shines" printed on both sides – Japanese in front and the English translation by Masayuki Arai in the back.

"My poverty saddens me at times
but at home they increase in number,
bit by bit.
(sung by Shizu Aida, aka Mrs. Kagawa)

Seen from the Hills, the sea is green
A color like the cucumbers we grew in the summer
Running so bitterness
All day long, the sea stabs
At my dry pupils
I have lived here for four years already.
Poverty, too, belongs to me
I have come to tell myself
Facing straight toward the bitter sea

Bunichi arrived at Palo Alto in 1918 to join his father from Eastern Yamaguchi facing the Seto Inland Sea. He studied English and poetry on his own while living and working at Stanford University dorm. By age 25, he published his first anthology "Hidden Flame" with the foreword by Yvor Winters (poet, critic and scholar at Stanford University). Apparently this anthology was lost and possibly no longer exists. While thumbing through another Kagawa anthology republished in Japanese in 2006 in Oakland, I found Bunichi poems which were sung at the camp in Manzanar and at Tule Lake. Seemingly he spent time in both camps.

I have visited JANM many times, but it was my daughter’s first visit and she was enthused to see the exhibits. While touring the library camp exhibits, we were lucky to encounter Roy Kakuda, a volunteer docent. Roy had spent his youth at Poston Camp 1 in Arizona. Camp Poston, at its fullest, imprisoned a population of 17,814. The internees who corresponded with Miss Breed were in Camp 111. Roy Kakuda gave us a true-to-life graphic story using his brand new iPad. We intently listened to him, totally mesmerized.
Posted by riodan at 12:48 PM No comments: