Searching Wilder’s “Our Town” on Google, I was led by chance to “Our Town –Manzanar”, a play by Hisashi Inoue (1934-2010), a Japanese playwright. “Our Town” is, I’m sure, a reference to Wilder, as he liked such wordplay. The question is, if Manzanar, the World War II concentration camp in the U.S., had retained all the spontaneous elements called as a town. He must have visited Owens Valley and Los Angeles to get a feel for "his" town. Quoted among the play references are Toyo Miyatake’s photo albums, Manzanar Diaries of Karl Yoneda (1906-1999), etc. The play was published in 1993, about the time I decided to leave California. I didn’t know that he wrote about Manzanar until very recently. It was January this year that I traveled to Tokyo to see Wilder’s “Our Town” played by the reading circle I once belonged to. I found that the Zushi City Civic Theatrical Group called “Nanja-Monja” had just performed “Our Town – Manzanar” in December as their 25th Anniversary event and their tribute to the author who passed away in April 2010. (Zushi performed the same play in 1996 on their 10th Anniversary). I could have hastened to Zushi, near Shizuoka had I known. I also wanted to read the book, but it was unavailable even as a used book.

Inoue was generally known as a slow writer. When we see the list of his works and a number of literary prizes (over twenty something), I acknowledge him as a prolific writer, covering a wide range of subjects, from Shakespeare to Chekhov, mysteries and scientific fiction, with a humorous touch and many twists. Inoue likened himself to a bird - his poems come from the head; plays from the body; novels, both polite and popular literature from two wings; and others like biographies, etc. from the tail.

The first Inoue play I saw was fascinating: Misako Watanabe’s “Kesho” (Makeup), which I volunteered to help promote in Southern California. A 50-minute show, wherein, an actress preparing her makeup and costume, keeps talking to her unexpected visitor and troupe members (to the audience), until she is ready to perform a play within the play. Could this visitor be her son she deserted years ago? The drama comes from the heightened emotions of the actress and likewise, the audience. English subtitles were supplied for the audience.

Upon my return to Japan, I read his “Face of Jizo” (translation by Roger Pulvers, literally “Life with my Father”). The “Face of Jizo” dealt with a female survivor of the Hiroshima Bomb. She is reaching marriageable age, and the dialog between father and daughter was all in Hiroshima local dialect, somewhat hard to decipher. Inoue was born in Yamagata, northern Japan and he was an expert in Tohoku dialects, but not Hiroshima dialect. Maybe he spent a lot of time in figuring out the Hiroshima dialect. The English translation is much easier to read.

Five girls appear in "Our Town – Manzanar". They are Sofia Okazaki, an LA Japanese Newspaper staff; Otome Amatsu, a Japanese immigrant from a farm village and “Naniwabushi” (3-string shamisen accompanied ballad) reciter; Sachiko Saito, a stage magician; Lilian Takeuchi, a singer; and Joyce Tachibana, an actress. These five girls were instructed by the Manzanar camp superintendent to perform a reading drama “Our Town, Manzanar”. The reading script was said to be compiled by a Relocation Center Intelligence Officer, but it was later disclosed that it was written by Sachiko Saito. While they practiced reading, girls were split into two groups, pro-American and pro-Japanese. Sachiko stayed aloof, joining neither. Sachiko admitted that she was a Chinese American sent from the State Department. They went through the feminine slanders and accusations, but settled down amicably to pursue the essence of being human, regardless of race or color.

The play starts as the curtain rises:

Sofia: Where the Sierra Nevada Mountains range in Eastern California

All in Chrous; Manzanar! Manzanar!

Joyce: Our town, our plaza!

Note: Jizo is a guardian deity of children
Posted by riodan at 1:48 PM 1 comment: 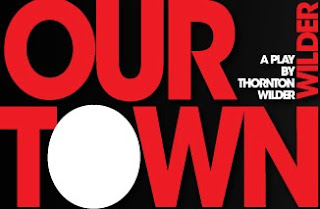 1969 was the year I left New York City. I saw a number of great Broadway musicals while residing there, but I realized I was leaving the city without seeing a play. So, one day, my wife and I drove down to a theater without much planning. We saw the Merchant of Yonkers. Larchmont was where we resided in Westchester County. Yonkers is in the same county and that might have drawn us in hindsight. All I remember of the play was that the merchant was a curmudgeon, who begrudged paying even 15 cents to his barber.

It was much later when we moved to San Diego did I found out that play was written by Thornton Wilder. The second version of the play, known as The Matchmaker, became a huge success, and led to the hilarious musical Hello Dolly. In the l980’s, we drove to Los Angeles to see it. The name Thornton Wilder was inscribed in my memory.

I heard the Wilder name again back in Tokyo when I joined a local reading circle of English literature. The circle initially started among the Tsuda Woman University graduates, but later invited the public to participate. Tokyo had changed a lot while I was away. There were no universities around when and where I lived before. Upon my return, I found more than a dozen universities moved out from downtown Tokyo to the western suburbs along with the faculty. I found my teacher from my alma mater lived close by across the Asakawa River. I could see Chuo University campus from my backyard. The closest university was Meisei University, the faculty of which included exchange professors from Mississippi State University. When the circle invited them as guests, we became friends, traveling together to see flowers, Noh plays, etc. One year several members visited a professor from Mississippi in the U.S. and I joined them. This professor was a graduate from Ole’Miss and she drove us to Rowan Oaks where William Faulkner resided.

I did my homework to know that Wilder created Glover’s Corners, a fictitious town in New Hampshire, just like Yoknapatawpha country in Mississippi by Faulkner. However, Our Town can be any town in the U.S. or any town worldwide. 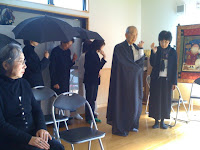 Acts 1 through 3 of Our Town was performed beautifully in January 2011 after a full year of practice, in one of the small citizen center halls by the Asakawa River. Great thing about the play is that no stage setup is necessary. However, the problem was that there were very few men in the circle. They overcame the problem, casting women as men in disguise, including the stage manager. The performance was for club members and guests only. It was a shame it was not open to the public.

Dr. and Mrs. Caldwell were also invited from Chiang Mai, Thailand, the home they chose to retire in. Dr. Caldwell told us that Meisei University students once performed Our Town as a one act play, combining Act 2 (Love & Marriage) and Act 3 (Life & Death) and omitting Act l (Daily Life). I heard Dr. Caldwell complimenting the circle, telling them their version was better than Meisei’s.

Eighty percent of Wilder’s quotes come from Our Town, particularly from the ubiquitous Stage Manager’s fluffs. No wonder Our Town won the Pulitzer Prize for Drama. Late in Act I, the Stage Manager tells the audience that he will leave the script in the cornerstone of a new bank so that “a thousand years from now" people can see "the way we were: in our growing up and in our marrying and in our living and in our dying.” This struck a chord and motivated me to travel to Kobe to see another Wilder play performed.

While Googling Our Town, I found out the play was performed by elite Japanese actors earlier in the year in Tokyo. I also happened to come upon a Kobe Youth Group planning to produce Wilder’s A Happy Journey in English in April. I obtained the script and discovered to my delight that the journey was from Newark to Trenton and Camden, New Jersey. The locations were all familiar to me. I lived close by in the 1960’s and drove all over New Jersey on sales trips. Wilder chose a family of four - husband, wife and two children - visiting another married daughter in Camden who was sick. For such a trip today, traveling the New Jersey Turnpike isn’t a big deal. But, I see the excitement of the family excursion, from their conversation with the neighbors and stage manager. I see aspects of our children in the children in the play.

Arriving in Kobe earlier than the matinee hour, I had a chance to meet the producer, saw their rehearsals on stage and even had a chance to wish the young actors luck. The play was wonderful. You can safely say that I am immersed in Wilder's dramas. 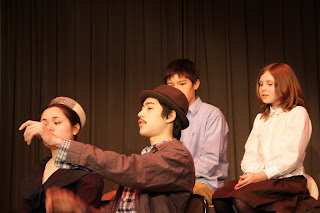