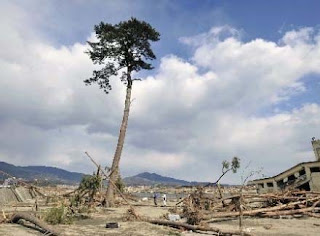 I am writing about 26 Japanese children (all in 8th grade) from l) Rikuzen-Takata and 2) Ofunato, Iwate Prefecture, Japan, who were chosen to travel to the Czech Republic, sponsored by many charity organizations, corporations and donors, in late March this year for a week or so. The name of Rikuzen-Takata became famous for the lone pine tree that survived the Tsunami.

These 26 children (20 from Ofunato and 6 from Rikuzen-Takata) are among those who lost parents, brothers and sisters, relatives and homes during the 311 Tohoku Earthquake/Tsunami disaster of last year. Transportation was donated by Korean Airlines and travel and lodging in Czech Republic co-sponsored by the Czech-Japan Association, Praha Zoo, Charles University (Karlova Universita in Czech), local municipal cities and citizen volunteers, including short home stays.

The Czech side president of the Czech-Japan Association is Věra Čáslavská, the 1964 Tokyo Summer Olympic gold medalist and the Japan side president is Setsuko Otaka, author and daughter of a military attache to the Japanese Embassy in Sweden who strongly opposed war. Otaka served as the head chaperon of the 26 children.

The trip itinerary was reported to be entirely tailored and different from those routinely offered by travel agencies. The itinerary was filled with dream-filled and heart warming events by welcoming Czechs to encourage the children.

Day one was spent in Praha. Lead to the Vysehrad Hill overlooking the River Vltava, children saw a play in which a pretty white-robed Princess Libuse of the Czech legend gave her prophecy "I see a great city whose glory will touch the stars. And you shall give it the name Praha". Translation was provided by a Charles University student interpreter majoring in Japanese. They then traveled to downtown Praha, where the medieval atmosphere is still maintained with hundreds of spires and towers and a mysterious Kafkaesque maze. 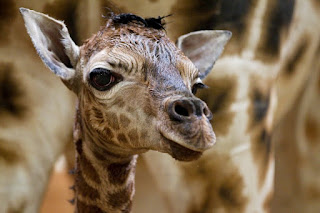 On day two, they went to the Praha Zoo for entertainment and for another surprise. One lucky child christened the a baby Rothschild Giraffe by winning the game of Janken.. A girl named Saya won and her name was immediately placed on a calligraphy paper with brush and Chinese ink prepared by the above mentioned Charles University volunteer.

On day three, children clad in colorful souvenir T-shirts with their individual names printed on them, visited schools, enjoyed plays, games, puppet shows, and singing with Czech children. First, they were welcomed by kindergarten children singing the song "Kimigayo", the Japanese national anthem. Then a jump rope contest followed on how long one can continue to skip. Three winners were all Japanese and they received medals from the Czech Olympic medalists, a real honor.

The second half of the itinerary consisted of trips outside of Praha. One was the trip to the city of Panenske Brezany, 50 kilometers north of Praha. This city sent 90,000 yen to Rikuzen-Takata collected by various city charities. A big applause came from the citizens gathered when the chaperon reported the money was used for transporting victims from temporary shelters to the nearby playgrounds for physical exercise. I cannot find the city by that name but found a very close phonetic name near the German-Czech border superhighway. Another one was to the Japanese Panasonic (another Czech donor) plant, which was to be around Pizen, 90 kilometers or 50 miles southwest of Praha.

I read in the paper report that one girl commented before leaving the Czech Republic that it was an unbelievable and "Mottainai" ("unable to express how grateful I was") experience, their kindness sank deep in my soul. I found a Praha blog post about hosting "Daichan" from Ofunato. The host happened to be a Japanese woman who has children of about the same age and I thought Daichan was lucky to have stayed with a host family where he was able to express himself freely, with no language barriers. Daichan talked about his experience on 3/11 with some humor, but it was clear to listeners that the tragedy had left great scars on his young mind.

Lastly, I wish to thank all our Czech friends, on their interest and concerns, through Pardubice Toastmasters networks for giving children food for thought and endless dreams for tomorrow. Glory and hallelujah to their bright futures! 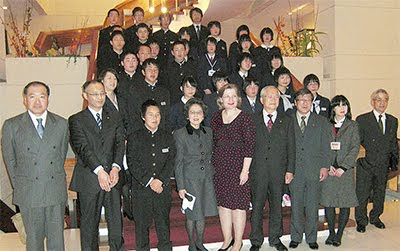 A group of 26 children from the tsunami-devastated region of north-east Japan are to spend a week-long wellness stay in the Czech Republic. The visit has been arranged by the Czech-Japanese society which set up an aid fund for the victims of the natural disaster which struck Japan a year ago. The event was organized with the aid of the Czech Olympics Committee and gymnastics queen Věra Čáslavská who won three gold medals in the 1964 Olympic Games in Tokyo and is extremely popular in Japan. In 2010, Japan honoured Věra Čáslavská with the Japanese Order of the Rising Sun for her contribution to cultural understanding between the two countries.

Posted by riodan at 2:17 AM No comments: