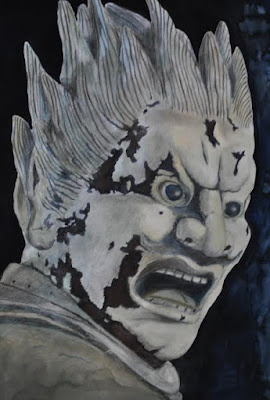 This striking New Year card came from one of my San Diego friends. His name is Mike Kawamura, a superb ceramic engineer, my longtime colleague at work, stationed in Europe and Brazil, as well as in the US. He organized a San Diego WISH Society as a cofounder, and is an executive adviser. He serves as VP for the Japanese Friendship Garden in Balboa Park.

The New Year card has his simplistic artwork, one discernibly glaring evil demon, the other a merciful Buddha saint image. I took his message as “Damn the Corona Virus” inflicting the whole world into disorderly chaos and many solemn prayers for departed souls because of Covid-19.

After a few weeks later, I asked Mike if I could share his artwork in my blogs and obtained his quick approval. He revealed the same request came from one of the non-profit organizations in San Diego for its fundraising campaign poster.

I recall I saw similar evil demon figures such as King Nio or Ashura, guardians of Buddha, when I used to visit temples in Kyoto, Osaka as well as Hino, Tokyo where I once resided. The temples I visited: 2 King “Nios” guarding Daigo Temple in Kyoto, 4 King “Nios”, guarding Shiten-Oji Temple, Osaka, and Takahata 2 King Nios guarding Takahata Fudo Temple.

The King Nio Gate at the entrance, rebuilt in 1605, enshrined pairs of King Nio statues (built in 1134 by Seizo and Nizo) , one called “a”, the other “hum” in Sanskrit. The term a-un is used as a figuratively harmonious relationship or non-verbal communication. 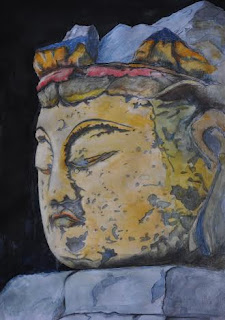 Prince Shotoku, Asuka period, invited Korean carpenters from the Kingdom Baekje to commission the construction. The temple celebrated its 1400 Anniversary. The building rebuilt most recently was in 1963.

The 4 King Nios guard the temple. Clockwise, they are Kings Jikoku and Zancho, who open their eyes and show anger as if they are looking at the enemy in front of them, while Kings Komoku and Tamon, are squinting with their eyebrows tightly and swelling their noses and staring into the distance. Four Kings surely vowing to keep the commandments, the eyes of four kings must be sharper and harsher.

Same Shingon Sect as Daigo Temple, an esoteric temple. Guarded by 2 King Nios. The benefits of faith can be seen from the special “Goma” ritual, the firewood burning. The fire symbolizes the wisdom of Fudo Myoo and firewood will burn anxieties, warding off evil, and grant the wishes of the believers as clean wishes and fulfill them.