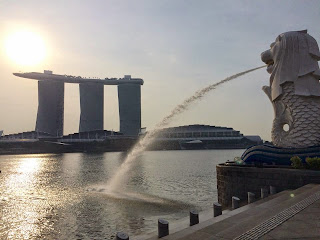 As soon as I was welcomed by a Canadian couple and host whom I befriended in Tokyo and Canada, I started my exploration of Singapore right away. My stay with them was 4 days, excluding arrival and departure dates. They live in a gated condo near the Botanical Garden. My host works in Shenton Way, Singapore's Wall Street, so we took a bus together at 8 AM and I was at Singapore City Hall area by 8:30. Morning rush was about to start but all the stores were closed until 10:00 AM. Church was where I could be alone in the morning.

My first three days were visiting l) St. Andrew's Cathedral; 2) Raffles Hotel (Museum & Arcade), the last bastion of the British colonialism, saved by Lee Kuan Yew, Father and the past Prime Minister of Singapore for over 30 years, almost like the Gate Formosa in Malacca saved by Sir Raffles; and 3) a nearby Starbucks or McDonald's for coffee. 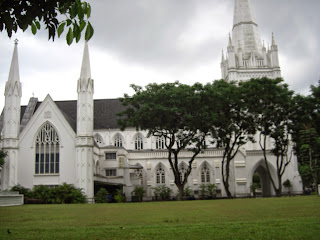 I strolled the deserted park at St. Andrew's on the first and third day, and spent over an hour in a pew in the cathedral the second day, trying to see if the cathedral was lost during World War II (it was an emergency hospital - found a cathedral brochure written in Japanese), Raffles for two hours for the first day for picture taking, souvenir shopping the second day and befriended a Japanese mother and daughter at Thompson's Thai silk store the third day, etc.

One thing I learned was my misconception about Sir Raffles on this trip. I had thought Raffles was knighted after his Singapore accomplishment, which was incorrect. His knighthood was bestowed upon when he returned to England from his assignment as Lieutenant-Governor of Java, ill and crestfallen having lost his first wife Olivia. In 1816 he wrote and published a book entitled "The History of Java" describing the history of the island from ancient times. In 1817 he was knighted by the prince regent. Then he was appointed Governor-General of Bencoolen. Sir Raffles set sail all refreshed to take the post with his new wife Sophia. 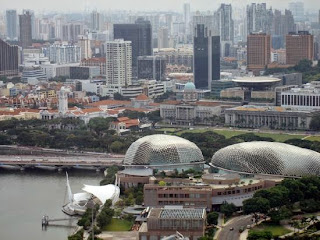 In the afternoon, I took hop-on / hop-off sightseeing buses, first visiting the Esplanade, Music and Drama Theatres on the Bay, nicknamed "Durian" for its shape by local Singaporeans. (I learned this theater was chosen as one of the 1001 Buildings you must see before you die by Mark Irving). I'm glad I got to see it. It was amazing!

Then I visited the ArtScience Museum and Marina Bay Sands, breathtaking twin buildings with feng shui motif. The former brought to mind blossoming lotus, and the latter, three monolith towers connected together at the top with an enormous deck. Some people see it as Noah's Ark but I wonder. It is an iconic design that completely transforms the skyline - convention center, hotel, restaurant, casino, all in one. You can tell Las Vegas Sands was involved. The day I visited the ArtScience Museum it featured works by American photographer Annie Leibovitz. There were about 200 photos exhibited including those of John Lennon/Yoko Ono and celebrities like Demi Moore, Nicole Kidman, Brad Pitt and many others.

The Garden by the Bay on reclaimed land has been raised with what they call SuperTrees - huge artificial structures shaped like palms. I had planned to visit Botanical Garden so I hurried on.

I completed one clockwise circuit on the bus that took about an hour that included a visit to upstream Singapore River, the Botanical Garden and the hotels on Orchard Road. My ticket was valid for 24 hours. I used it for three rounds and stopped to view the Botanical Garden and ate at a fancy restaurant on Orchard Road in the evening. I enjoyed the great bus service and sightseeing.

Encountered during the bus ride were a couple of smile-provoking public art sculptures. I was too slow with my camera so I have no photos of them, but I found one photo from the database of Singapore Public Art. It is called "Momentum" (2007) - about 20 meters tall and 10 meters in diameter. I surmise it is the modern Tower of Babel. The sculptor is David Gerstein of Israel. He might have won the competition for the work. In surveying the above data, I found Singapore is now full of public art. I thought of Taiwan's Ju Ming who struggled with his son to create a private sculpture park near Taipei mountain village. Singapore, as a nation, is planning to fill the island with an abundance of public art. 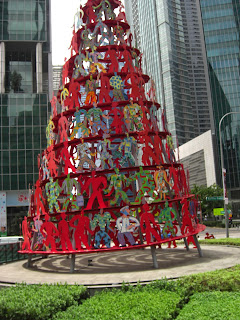 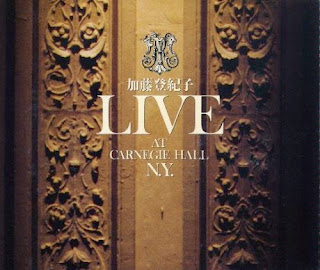 The third Monday in September is a unique Japanese national holiday which honors and shows respect to the elderly. A few years ago, our neighborhood started inviting me to a special district luncheon with entertainment provided by a local high school music band or drum corp. My wife Tamiko received the same invitation this year. The couple sitting across the table from us were our acquaintances. Tamiko knew they owned a dance studio and asked them, "Are the Ishimatsus going to demonstrate their dancing again soon?" Apparently Tamiko knew that the Ishimatsus came last year as the winner of the All Kyushu ballroom senior pair dance competition. The studio owner's response was, "We heard he passed away." After an awkward silence, Tamiko and I both uttered the same surprise, "But he was so young."

Yasutaka Ishimatsu joined the Kitakyushu Toastmasters before the turn of the century. He was the eighth President serving his term from 2004 to 2005. A mechanical engineer by profession, he worked at a Japanese subsidiary in Louisville, Kentucky for six years and returned to Kitakyushu. Ishimatsu was a breath of fresh air to our club with his serene smile and playful wit and humor. I found in him something our club was missing. We welcomed him and I enjoyed many of his speeches related to Kentucky. He traveled with us to a number of Toastmaster events and contests and was a popular Kitakyushu representative. 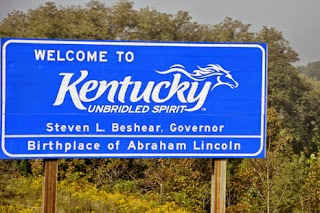 Kentucky is one of the states I never stepped foot in. The closest cities I visited were Cincinnati, Ohio; Nashville, Tennessee; and Indianapolis, Indiana. In late 1980s, Toyota built its Camry plant in Kentucky and soon related companies flocked there and clustered around them. We learned many things from TM Ishimatsu such as the Kentucky Derby, how Kentucky’s Lexington city was named after Lexington, Massachusetts and why Stephen Foster's Kentucky Home became literally the State Song. 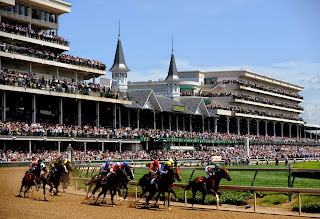 One speech that impressed me was about the concert he brought to Lexington through his personal connections. He learned that the Japanese celebrity writer/singer Tokiko Kato was going to be performing at Carnegie Hall in 1988 (see her album cover at top). He knew his boss in New York was the brother to Tokiko and convinced him that that Tokiko's visit to Kentucky could not only boost the friendship between Kentucky and Japan, but also help ease and soften the local anti-Japanese feeling. With the go ahead obtained a year ahead of time, he succeeded in completing all the necessary preparations, getting cooperation from all the Japanese expatriates, including Toyota, who doubted at first if she would ever come.

The day came. Tokiko's song - "Shiretoko Jojo", "One million roses" and of course, Foster's "Home on the range" and state song overwhelmed and charmed the audience gathered at the Transylvanian University Hall. After the concert and reception, Ishimatsu tried to hand her an envelope in appreciation. She did not accept it. She thanked him personally by shaking his hands saying "I hope my concert tonight will help make you all succeed!" He said he became her biggest fan that day. 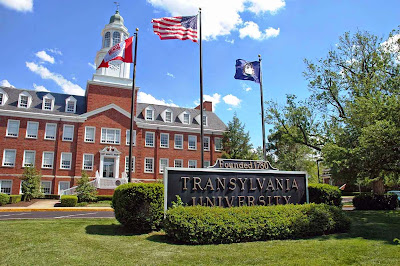 Note:
Transylvania University is a private university in Lexington, Kentucky. It was founded in 1780, making it the first university in Kentucky and among the oldest in the United States. 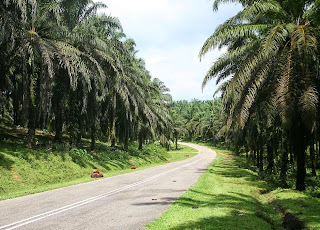 Monday August 25, 2014, I took a transnational bus, with a spider mark on the front glass, from Kuala Lumpur to Singapore. I avoided Sunday traffic to avoid Johorbaru, shoppers coming back from Singapore crossing the border, reminding me of the San Diego / Tijuana border crossings, which I knew well. I changed hotels from KLCC to Pudraya Sentral so that I could walk to the bus terminal early in the morning with the ticket I had purchased on Sunday.

The first bus was to depart at 7:30 AM. I was at the terminal at 7:00 AM. The huge oblong building was deserted, contrary to the weekend jostling crowds. Travelers go up to the second floor which has numbered gates with waiting chairs and shops and food stalls. It was one of those store ladies who asked her neighbor to watch her store and guided me to the upper floors to the bus ticket counter. She was pregnant and I felt guilty to force her to hurry upstairs. She was so kind to me, a stranger.

At around 7:20 AM a woman came and opened the descending stair gate. I immediately followed her. She simply said wait there on the deck. It's a dimly lit first level floor with islands of platforms. The sectional concrete walls block the view of the entire floor. I felt I was in a large empty warehouse. No one was there at 7:30 AM and I became a little nervous. A nondescript man approached me and ordered me to move to a different numbered deck. He was a dispatcher. Again, nobody appeared at the designated deck. Nothing happened at 7:45. About close to 8:00, one guy joined me and asked me some questions I didn't understand. About 8:10, the bus finally arrived at the deck. The bus, after idling for another 10 minutes, left Pudraya, made a big left turn, headed for KL Lake Garden, passing the Amphitheatre and National Musuem and getting onto the highway heading south.

KL-Malacca was my third journey on the bus. I had plenty of time to compose my Haiku, watching hillsides all covered with oil palms. The bus was traveling through the two states south of Malacca, Pahang and Johor, which use close to 20% of their land for oil palm farms. Yes, Malaysia is the top palm oil producer and exporter in the world. The palm oil industry overtook the rubber industry by modernizing its mills with higher efficiency and an ecology friendly approach - reducing the output of methane and holding wastes to a minimum. 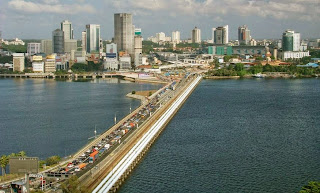 The bus had one stop at a place called Yong Peng to change drivers. It is an interchange town, 100 km or 70 miles from Singapore. Most of the passengers got off before the border. Only two passengers and I went through customs. After crossing the Johor Strait through a kilometer long causeway bridge, the bus took the Changi Airport route and down Nichola Highway. Finally, we circled the low rise shopping centers reached the end destination. The entire trip took five hours plus.

I had no idea where I was but happened to find a Japanese restaurant and went in. Ordering lunch, I asked a woman manager for the nearest bank and hotel. She also agreed to keep my luggage awhile. I walked free of luggage to exchange currency and obtain sightseeing info. This walk really helped me 'get my feet wet' in Singapore I was at the area called Bugis. The Hotel I visited was V Hotel, at MRT Lavendar. I even had a chance to drop into the Singapore Visa Office where I saw many young people walking in after a security check. 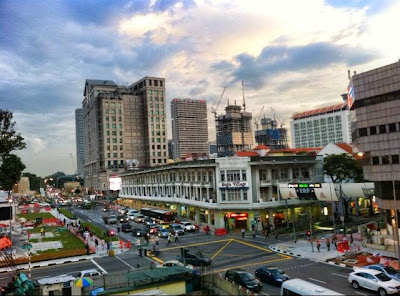