Oh, Danny Boy,
The pipes, the pipes are calling
From glen to glen and down the mountain side ….
But come ye back to summers in the meadow ….


This impassioned Danny Boy song I loved to sing often in my younger days. However, I had not questioned how the song originated, as I have presumed that it was one of the indigenous/traditional songs that had existed for a long, long time in Ireland. Recently I found a surprising story with a twist, which I want to share with you tonight.

In 1851, Jane Ross, a Londonderry woman, while listening to a traveling fiddler named Blind Jimmy McCurry, heard a beautiful ballad, noted it down in a hurry.  Jane was known as a keen Irish folk song collector.  She submitted the tune to Dr. George Petrie, an artist and musician in Dublin and it was then registered and published as “Londonderry Air”.  It was said many lyricists tried to make a song to match up to it, but none stood out.

At the turn of the 20th century, an unimaginable thing happened. Margaret Weathery in Colorado, US, happened to hear this Londonderry song played by an Irish immigrant band and sent it to her husband ’s brother Frederic in Somerset, UK.  The US Gold Rush to the West attracted immigrants, including the Irish, so the songs spread across the new continent.

Danny Boy wasn’t born without a flash of wit.  Frederic Weathery was a lawyer, as well as a songwriter. As a matter of fact, he composed his version of Danny Boy but it never became popular. He placed the title Danny Boy to the song that came from the U.S. and it hit big with the arrival of the Irish tenor singer John McCormack. 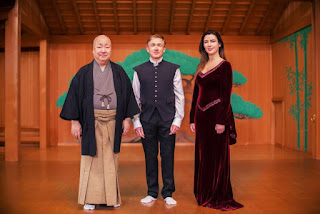 With gradually rising tweets and faster wing fluttering movements, Takahime, the guardian of the well, starts wriggling and transforms into a goshawk, along with the heightened tempo of Noh ensemble of bamboo flute, hand drum and stick drum beats and chorus of ‘rock’ symbolizing grey colored masked Noh singers, as well as, Celtic Anuna singers.  Glittering long-sleeved robe of Takahime represents the gorgeous hawk’s two wing-mimicry.  Hypnotized by the guardian's terrible power, the old man is in trance state. Cuchulain must pass the guardian to the well for the miraculous water, but is hindered. He pulled his sword to fight. Takahime and Cuchulain sword fight intensifies to a climax. However, he is lured away from the well, which bubbles up. In his frenzy, he follows Takahime in her ascending flight, apparently forgotten that the water that would bring him immortality. When he recovers himself, the well water is gone and the old man is hopeless. He laments and begs the guardian to stay with him.

In Yeats’ “Hawk’s Well”, Cuchnulainn’s weapon is a spear. In “Takahime, the weapon is a sword. Yeats admired with awe the Japanese “Bizen Osafune” sword presented to him as surprise a gift from Junzo Sato when he traveled to Portland, Oregon in the US in 1920 for a lecture. He sang:

Is Sato's ancient blade, still as it was
Still razor-keen,
still like a looking-glass
Unspotted by the centuries;
That flowering, silken, old embroidery, torn
From some court-lady's dress and round
The wooden scabbard bound and wound
Can, tattered, still protect, faded adorn.


Junzo Sato just happened to live then in Portland (on business) and saw a poster about Yeat’s lecture. He brought the sword to the U.S. It was probably his family treasure. Yeats' eulogy for Cuchulain is found in his plays “Death of Cuchulain” and “Cuchulain comforted”.

Upon my return home in Kyushu, I searched the YouTube site. A number of Hawk’s Well came up, beginning with the Nara performance where the same Gensho Umewaka, a living National Treasure, played Takahime in Shibuya. I watched Hawk Well in musical /opera formats, and experimental modern drama as well as Kabuki formats. Some of them were performed internationally – in Europe, U.S. and South America.  I know Yugen Theater, in San Francisco, specialized in its effort to promulgate Noh in California.  I remembered The Japan Foundation periodically sponsored traditional art performances like Noh and Kabuki. My  ex-employer in San Diego sponsored a couple, including the Kodo Drum troupe from Sado Island. Noh related associations in Tokyo are reportedly planning special Noh events for the participants from abroad with English subtitles in preparation for the year 2020 Tokyo Olympics. A nice incentive and gesture of welcome!

Anuna Choral singers stayed on stage from the beginning to the end, singing together with the Noh “rock” masked singers. I first thought their collaboration would come to an end sooner, so it was quite a surprise.  Reading an article by Michael McGlynn after the show, I understood what Anuna singers were trying to accomplish. Michael said they dare not compete with the Noh singers, nor try to harmonize at all. No room for competition like in opera, Michael wrote. They keep their chorus aloof and independent. It could be the breaths of humans, mythic sounds of the breeze and whisper, rustling of tree leaves, or lapping waves, created by plural voices of Anuna singers, each in different tone and scale, over and above the composite Noh ensemble including instruments, to be culminated as result in creating a piece of great artwork.  I was impressed.  Looking up the historical career, the Anuna Choral group was founded in 1987 to recreate and give a new life to medieval Irish  in the present era. Anuna singers have visited Japan often. They sang on the 1997 Japan Academy Award winning film “Princess Mononoke”, an epic historical fantasy anime directed by Hayao Miyazaki. 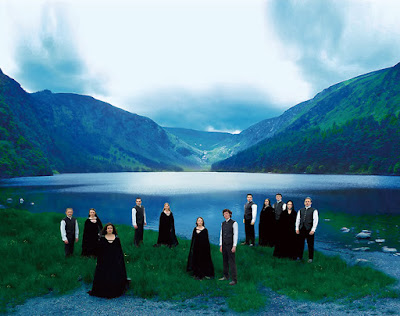 My Hino friend told me that the Anuna reminded her of “Holy Mother in Nagasaki”, a modern Noh written by Tomio Tada, in which a Psalm was sung by local high school girls.  I’ve heard that this Noh play was performed in New York and Boston some years ago and I’m putting it on my wish list to see it this year. 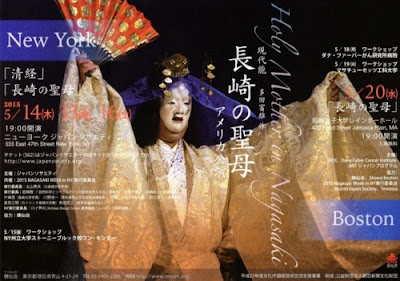 Posted by riodan at 3:18 PM No comments: