I So Love Shimonoseki!

"Live a pleasant life in the unpleasant world!" This is a famous quote of Shinsaku Takasugi, Choshu Clan Samurai, perhaps your hero, who played a pivotal role in the pre-Meiji Restoration. He passed away young before his dream came true; however, his strategy of organizing militia and his visionary leadership should well be long remembered.

Ladies and gentlemen and guests, I'm honored to speak today for Shimonoseki Toastmasters in the making. Shimonoseki is my favorite city where I'm always hoping to return. My sister-in-law invited my wife and me to live in Kitakyushu upon our return to Japan from the U.S. The first place she drove us to was Tsunoshima Resort, a beautiful cobalt blue ocean view and sand beach and a bridge to the island. The scenery is comparable to the 7-mile Bridge, Key Largo, Florida. I was so impressed that I have taken American guests there, also my son from New York and my granddaughter from California. 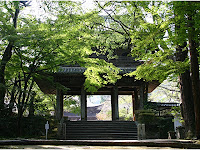 Representing Kitakyushu Toastmasters, I was fortunate to meet today's Chair TM Miyake. She visited with me at Kozanji, Mohri Palatial Residence, Nogi-jinja, etc. in Chofu. I had a chance later to visit Akama Shrine, Shunpanro, Yume-Tower, and Karato. Oh, I so love Shimonoseki!

Thank you for coming today to join us in our noble venture, and I know you are anxious to know what Toastmasters is all about. First and foremost, Toastmasters is a non-profit organization that operates clubs worldwide for the purpose of improving English communication and leadership. Founded by Dr. Ralph Smedley in California, it covers over 110 countries and accommodates a quarter million members. The greater San Diego District, where I used to work, had a population of 3 million and had about 150 clubs when I left. In other words, 50 clubs per million there. Upon my return in 1995, I found clubs in Japan narrowly reached 60.

Kyushu had only one club, in Fukuoka, right after the war, started by a GARIOA scholarship student who came back from the U.S. It is one of the oldest clubs in Japan. Fukuoka, therefore, had a few Kitakyushu members who commuted twice a month by train. They were so happy to join the newly formed club in Kitakyushu. It was in 1997, over 15 years ago. Now the time has come for Shimonoseki to claim the same exciting beginning.

New members will learn tonight, through well established protocols - the one minute self-introduction and the two-to-three-minute response to table topics question. Then, after you are inducted as a member, you must give a formal 6-minute speech. You will then be evaluated by your friendly fellow members and the mentor in charge for improvement. Friends help friends practice in a warm accepting atmosphere. You will advance step by step following the Toastmasters Manual, the treasures of this century old wisdom to success. The project manual covers speech organization, vocal variety, language, gestures, humor, persuasion, etc.

I'm sure each of you has made your New Year's resolution in January to brush up and expand your English communication this year. It's never too late to empower yourself by way of joining the Shimonoseki Toastmasters as founding members. Seize this opportunity and realize your dream! It is better late than never. Welcome to an exciting adventure.

Posted by riodan at 2:02 PM No comments:

"Standing on the outskirts of Yokohama town, bristling with its display of modern miscellanies, I watched the sunset in your southern sea, and saw its peace and majesty among your pine-clad hills, - - with the great Fujiyama going faint against the golden horizon, like a god overcome with his own radiance, - - the music of eternity welled up through the evening silence, and I felt that the sky and the earth and the lyrics of the dawn and day fall are with the poets and idealists."
(from Sir Rabindranath Tagore's speech at Keio University)

1. Visit the Sankeien Garden in Yokohama

These were the top three items of my "bucket" list once I returned to Tokyo in 1995, as I was deeply involved in the planning and fund raising of the San Diego Japanese Friendship Garden, initiated by Wil Hippen Junior, the Honorary Japanese Consul of San Diego. This San Diego garden was named after Yokohama Sankeien, in view of the sister-city relationship between San Diego and Yokohama. Phonetically named it was the same, but our San Diego Sankeien used different Kanji characters. Whereas the Yokohama Sankeien is blessed with the massive land of 43,240 acres, the San Diego Sankeien had leased only 5 acres from the city inside the 14,000 acre Balboa Park. But when you think of the authentic Portland Japanese Garden with 5.5 acres, the size of San Diego Sankeien is fair. Having heard Consul Hippen admiring Yokohama Sankeien so much, I thought I had to see the garden for myself.

One day in 1995, my wife and I extended our trip from our Yokohama relatives to the original Sankeien close to Tokyo Bay, called Honmoku. It is here the Yokohama bay shore bends to form a chevron shape. It is a bit hilly and Commodore Perry called it Treaty Point. Today, the shore is surrounded by oil refineries and tanks by city highways. It must have been a good lookout point in the past. Here the city maintains a complex of public parks, swimming pools, museums, including Sankeien, originally owned by silk trader king Tomitaro Hara (1868-1939).

My heart was full of emotion at Sankeien. I felt I was finally back home as a Japanese. Mr. Hara had 17 historically significant buildings moved, set amidst an inner and outer garden and two lakes. These buildings were from Tokyo, Kyoto, Kamakura, etc. Ten of them have been declared Important Cultural Property, and three more are Tangible Cultural Properties. Mr. Hara was a pioneer of transplanting buildings. Today it is fashionable to move old houses to new locations. The outer garden opened in 1915 to the public, and the inner, which housed his private house and garden, was donated to the city in 1953. It is pure bliss to see that Sankeien is now fully recovered to prewar levels. 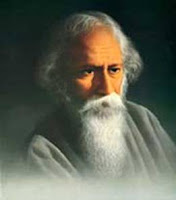 During this garden tour, I learned Mr. Hara offered Gurudev Tagore and his entourage a two month stay in 1916. The quote at the beginning of this post is from his speech delivered at Keio University. He was on his way to the U.S. to give lectures as Nobel Laureate but he was eager, as an artist himself, to learn Nihonga, inspired by Tenshin Okakura who visited India. When Tagore stayed at Okyo Maruyama's home in Tokyo, Mr. Hara came to his rescue as dilettante and art sponsor. Mukul Dey, a young artist accompanying Tagore, wrote to his father:

"Dear Father, A couple of days ago we came here from Tokyo. Gurudev and the others have arrived as well. We are staying with a very famous Japanese millionaire here. The sea is just in front of this house. Across the sea is America. Steep and big cliffs rise from the shoreline. These are thickly covered with pine trees. On top of the cliff, amid the rows of pine trees, is a palatial complex where we are staying. We are living royally with Gurudev. Lots of servants and maids around. All of them eager to serve us. This wealthy man, Mr. Hara, with whom we are staying, is a superb host. He is full of kindness. The common man can visit his garden at their will and organize picnics here. For them Mr. Hara provides firewood, good stoves and water. In his garden there are places where people can sit down and rest…many teahouses and temples, all are here. This Mr. Hara lets his money flow for the sake of his country’s art. All the great artists of Japan, Mr. Taikan, Mr. Shimomura Kanzan receive generous patronage from him. They receive unstinted support from him in exchange for their paintings. Mr. Hara has a great passion for art."

Tagore seemed so impressed with Kanzan's "Yoroboshi" that he wanted to take home a replica. When artist Hirokata Arai made the requested replica arranged by Mr. Hara, Tagore offered Arai a teaching position for appreciation at Visva-Bharati University in Santiniketan, popularly known as Tagore University.

Tagore's observation of the Sankeien was as follows:

"Every day about noontime, neighborhood workers started to arrive on foot at this beautiful garden, like bees gathering for honey. They strolled around the park, bewitched with sceneries of ocean and sky molten, filled their hunger with refreshment, moistened the dry heart, invigorated themselves and walked back to where they belonged. While so doing, nobody made noise, trampled down grasses, broke tree branches or flowers, scattered trashes. No fights and no drunkards. And they were ordinary workers. This totally amazed and enraptured me."

Here at Sankeien, Tagore took part in tea ceremonies, witnessed flower arrangement, saw Noh plays and composed haikus. The haiku he sang in Japan became an anthology titled Stray Birds, which he dedicated to his generous host Tomitaro Hara. I'm quoting here several haikus from the anthology including those he made in a Karuizawa summer resort where he met Tomi Kora (1896-1993) as his student of the Japanese Women's University. (Tagore taught summer class there). Dr. Kora, a graduate from Columbia University, became a congresswoman who visited Russia as the first Japanese after World War II and met Japanese prisoners.

Stray birds of summer came to my window to sing and fly away.
And yellow leaves of autumn, which have no songs, flutter and fall there with a sigh.

Woman, with the grace of your fingers,
you touched my things and order came out like music.

Tagore visited Japan three times but never after Japan marched on to imperialism and took a militaristic direction. I had a chance to read his elegant speeches delivered in two universities, Tokyo and Keio. I felt that he was a real prophet from his first moment of arrival and tried his best to curb Japan from entering into war. But alas, I think very few people understood his lofty proficient English.

The tumult and the shouting dies;
The captains and kings depart.

*Note:
"Yoroboshi" or the blind beggar monk based on the Zeami's Noh Play is one of Kanzan Shimomura's representative works produced in 1915 on a folding screen. It is currently housed in the Tokyo National Museum as an important cultural property. The replica produced by Hirokata Arai is housed at the Visva-Bharati University.
Posted by riodan at 12:18 PM 2 comments: