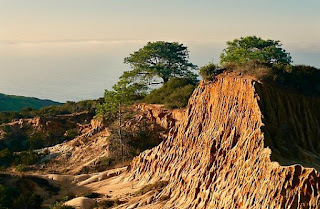 San Diegans are proud of their rare and unique Torrey Pines, once the beacon that served the coastal pilot.

Torrey Pines was discovered by a young physician-naturalist Charles Parry (1823-1890) on his U.S.-Mexican boundary survey and sent samples for verification to his mentor, John Torrey (1796-1873), an eminent American botanist at Columbia University. The tree was named 'Torrey', in his honor, around 1850. It was fortunate that the founder Charles Parry strongly advised the fledgling San Diego Society of Natural History that trees deserved protection. Despite San Diego’s growing awareness, however, degradation of trees continued. Woodcutting remained a permanent threat.

George Martson, known as the first citizen of San Diego, was instrumental in establishing San Diego’s park systems, including the famous Balboa Park and Torrey Pines State Park. (San Diego City Public Library was also one of his projects.) Ellen Scripps, a philanthropist, endowed Torrey Pines State Park to the citizens. Guy Fleming, botanist and a fellow with the San Diego Society of Natural History, dedicated his life to make Torrey Pines Park a State Park. Ralph Cornell, landscape architect, left Torrey Pines Park management guidelines to Guy Fleming. Ralph’s point was that the picturesque slopes should not be concealed by excessive planting and to keep the reforestation as modest as possible. The Guy Fleming Trail is about a mile long and leads you to fantastic sea bluffs.

Then came a surprising find when Torrey Pines were discovered growing on Santa Rosa Island, 175 miles northwest of San Diego. Apparently Guy Fleming and Ralph Cornell visited the island and found they were not exactly the same kind of trees. They are named Pinus Torreyana Insularis, with slight genetic differences from Torrey Pine.

About 10 years ago, I visited my daughter in Santa Barbara. She took me to see the largest Torrey Pine in the world located in Carpenteria. This tree was brought from Santa Rosa as a seedling and planted in 1988 by Judge Thomas Ward. Local legend says that in the 1880’s there was a polite but heated competition between the residents of the city, to see who could grow the most unique plants, and when Judge Ward received his tree as a gift from his friend Townshend Stith Brandegee, he proudly planted it directly in front of his home. The tree now measures approximately 126 feet (38 meters) tall, its circumference 20 feet 5 inches (6.25 meters) and its branches span 130 feet.

When Florence Ward inherited the property she dutifully continued caring for the tree and saw that it received professional maintenance. It was Florence who proposed the tree should become an official landmark and be protected. In 1968 the tree was recognized as the city’s first official landmark as well as a state historic landmark. There was a celebration in 1988 for the tree’s 100th year anniversary.

The following is a comparison between Torrey and Monterey pines.

Torrey pine (Pinus torreyana): Torrey Pine is unique in that it is the only hard pine with 5 needles per bundle. The egg-shaped cones can be as large as 5 inches long. The tree grows to 40 feet in height. Natural occurrence is now limited to two dry, sandy coastal regions of southern California (coastal San Diego County and Santa Rosa Island off the coast).

Monterey pine (Pinus radiata): The needles are in bundles of 3 (rarely in bundles of 2) and are flexible, bright blue-green or grass-green. The cones are oval, 3-7" long, with light-brown rounded scales. The branches retain cones in many whorls or circles. Closed, but open and close frequently with changes in humidity. The bark is brown to grey-black. This tree grows to 100 feet in height with a 3 foot diameter and dense crown. It is found in three small California mainland locations and two off-shore islands; but widely planted in New Zealand, Australia, and Chile. It prefers humid and foggy coastal areas, from sea level to 1000 feet above sea level in the Santa Lucia Range. It has been found to grow in areas up to 2100 feet above sea level on Cedros Island.

Combining the cities of San Diego, Del Mar, Santa Rosa, Capenteria, and Santa Barbara, the total number of the surviving Torrey Pines is about 10,000. 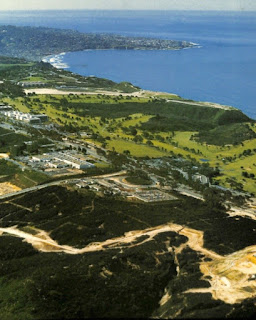 Torrey Pines’ 36 holes are listed as a “must-play” course in the U.S. for golfers - professionals or amateurs alike. It’s an icon and a challenge to San Diegans, having many of the holes atop the bluffs facing the wind. Floating amidst the spectacular views overlooking coastal lines and the La Jolla Seashore, are silent hang gliders. Too classic, I’m afraid. I proudly wear a Torrey Pines golf cap on my daily outings in Kitakyushu, although no Japanese ever voiced recognition of the tree emblem.

While I was living in New York, experiencing harsh winters with heavy snow, I marveled at the lush greens and sunny California sky, beginning with the New Year’s Rose Parade in Pasadena, and the first Golf Tournament at Bing Crosby Pebble Beach and Andy Williams Open in San Diego, California. Then, upon my relocation to San Diego in the 1970s, I fully enjoyed the amenities. I used to leave my home on weekends before 5 am and mingle among the early birds who thronged outside the starters’ gate still in the dark. There was no price difference between the North or South course then. Today I’m shocked at the green fee schedules I found on the Internet. Boy oh boy! South Course and North Course have very different green fees now. If you play 18 holes on weekdays in the South, you pay $61 (seniors $43) with an annual $25 resident membership. Visitors must pay $183 per person. On weekends in the South, residents pay $76 while visitors pay $229 per person. For the North Course on weekdays, the price is $40 for residents (seniors $28), $100 for visitors and on weekends, $50 for residents and $125 for visitors. The membership fee has increased 5 fold compared to the days when I played. I remember paying a little over $100 at Pebble Beach as a visitor. 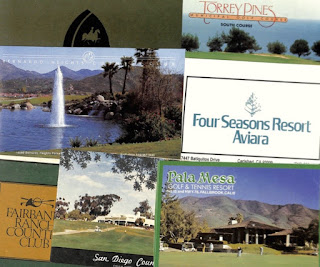 I stopped playing golf after returning to Japan. I found the golf courses in Japan too far to travel to since they are located in remote mountainous countryside. I switched from golf to swimming. My wife gave away my golf clubs to a buyer for a local department store. I’m wondering how the courses are faring with the recent 4-year California drought. “Brown is the new green” started a new joke. I’m sure Torrey Pines uses recycled water and a computer programmed watering system. I just found out that 81,400 rounds were played on both South and North courses during the 7 months ending on January 31, 2015, which culminated in a marginal profit. The paper says Vista in the north was hit hard by drought. The Eucalyptus trees were drying out. I will cover Torrey Pine trees next, one of the rarest trees, now on the IUCN red list of endangered species.
Posted by riodan at 1:47 PM No comments: