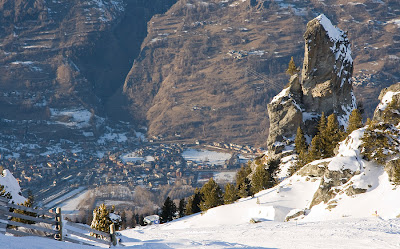 There’s a million skiers, but one skier who comes to my mind is one of my old friends in Yokohama. Her name is Kim, a Hokkaido native. She responded to me immediately when I wrote about my Czech friend and fellow Toastmaster, Jiri Psenicka, a cross-country skier and silver iron winner.

She had done significant traveling in the U.S. after losing her husband and we had talks of common interests of touring the U.S. Then her son, a medical student, studied at Purdue and she joined him for a while in West Lafayette, Indiana. She talked also of skiing in Hokkaido and Tohoku and I remember she sent me a card from the Zao Ski Resort. However, skiing was a one-sided topic, as I am no skier. I told her I am a swimmer and she said she also swims to keep physically fit for skiing. Apparently my silver man story attracted her attention, and she shared with me that she was planning her first ski trip to Europe with a group of friends.

A month ago I received her photo story of her trip to Bourg Saint Maurice. I found therein a sparkling shot of Mont Blanc. I live in a seven-story apartment called Mont Blanc 2. I didn’t particularly choose it. It’s just a coincidence.

I Googled "Travelog Mont Blanc” out of curiosity, and I found many Japanese mountaineers, more men than women, have attempted the climb, some gave up half-way because of weather, but many were successful with the help of local guides. Another surprise was 70% of the summer Chamonix visitors and 30% of the average annualized visitors were Japanese. I asked Kim if she extended her trip to Chamonix, 30 km north on the opposite side of Mont Blanc from Bourg Saint Maurice. Her answer was “no”. Her party consisted of all skiers, no climbers.

Her French destination had a number of fascinating historical names when I looked at a map: Bourg Saint Maurice and the Great San Bernard Pass, and Geneva and the Rhone Alps. Saint Maurice is the most blessed and honorable patron Saint in Western Europe who valiantly fought and died for Christianity around the 3rd century. The Great San Bernard Pass was where Napoleon Bonaparte invaded into Italy in 1798.

Geneva, the cosmopolitan metropolis of Switzerland - few people know that it was an independent republic for at least until the 16th century when it became a Swiss Canton. Jean Jacques Rousseau blessed, “May a Republic, so wisely and happily constituted, last forever, for an example to other nations, and for the felicity of it own citizen.” Geneva is home to the European Union Headquarters and UNO, CERN, Red Cross, and accommodates 160 States representing their respective Government with its Swiss-hearted hospitality. I’ve been to Zurich on business, but not to Geneva. The 812 kilometer River Rhone flowing into the Mediterranean originates from the watershed Rhone Alps. The Jura Mountains, sub-alpine mountain range, separates the Rhine and Rhone Rivers and forms part of the watershed for each.

Switzerland is another country of language and cultural diversity and I have studied its historical complexities and agonies with great interest and respect. Kim said English was spoken with a French accent, but she found no problems. 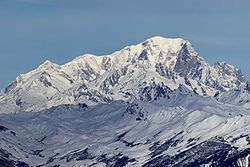 Well, so much for a somewhat of a long introduction. Let’s see what her two photo album shows. The first album is immersed in daily skiing and great regimen. The second is about shopping. All of the travelers must be good skiers taking precautions that anything could happen in a foreign land. They carried their shoes and rented their skis. They planned well and everything went as planned, never over-strained, enjoying lunches and taking photos during breaks. Once off the Mountain Railway, they waited turns for the lift, climbed up the slope and skied down.

Years ago, I had taken Kenny, my Japanese skier friend, to New Hampshire. Our mutual American friends took Kenny and me to his weather station on Mt. Washington. Kenny, the skier, went up alone to the Tuckerman Ravine snow walls while we watched him laboring upward for an hour or so, but skiing down in minutes. I wonder if the ravine has gotten a lift by now.

As the direction guide board shows, they skied Paradisky which had quite a lift network; Kim said wherever they skied down, they were connected back to the departure point. That way they could concentrate on their skiing and the skier’s bliss. One day they skied down to the Italian side and tried Italian dishes for a change. Kim cited differences of trail lengths between Japan and France. Japanese trails are rather short averaging around five kilometers or so, while in the French Alps, it is more than double. The affordable lift pass tickets for seniors are terrific, although senior classification comes in 3 brackets, 65-72, 72-75, and 75 and up (no charge if you are over 75 years of age). They were thankful to be able to take advantage.

When airfare is disregarded, their daily out-of-pocket expenses are about the same between Japan and France. The high valued Japanese Yen was an advantage in France. Kim felt they found an all-around bargain spot by following the rule “don’t go where people throng”. The other album is about their weekend shopping experience in Bourg Saint Maurice. Kim’s group enjoyed this trip so much, they may go back next spring, when they can get lower apartment rates.

Posted by riodan at 6:38 AM No comments: