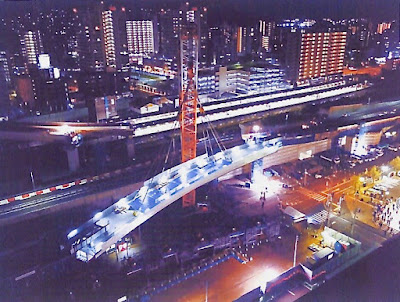 A Happy Reiwa’s 2nd New Year to you all from Kitakyushu Japan! Yesterday (Jan 17) was a quarter century anniversary since the tragic Great Hanshin Earthquake. Kobe people had their memorial service and silent prayer in front of bamboo lanterns to mourn the victims. That was the new year I returned to Japan after retiring from the U.S. and started my ‘2nd Round’ career in Japan. I adopted Kitakyushu as my new home with the help of my sister-in-law and commenced to run the 4th English Toastmasters Club on Kyushu Island. 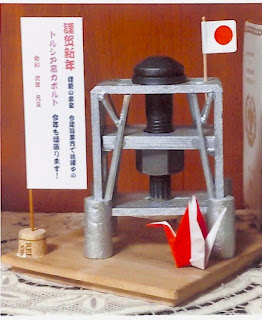 During the New Year holiday celebration, I met an old friend “Mitchie” in the neighborhood who surprised me with the news that the bolts he put his heart and soul in developing as a young engineer, was used in bedecking the ramp bridge recently straddled over the Kagoshima Railroads at the JR Yahata Station. I asked him did he mean by the “Harunomachi” Ramp, the so-called Kurosaki Bypass (5.8km between Jinnoharu and Harunamachi) to be connected to #3 National Road and eventually to the Urban Express in the near future? He said yes! Wow, I had been watching the long ramp under construction at the south side quarter block along the JR railroad since last Spring which took more than half a year in the form of overhead concrete road on the scaffold. Around October, I saw tall and heavy-duty cranes arriving for the final lifting. Unfortunately, I was hospitalized in early November and could not confirm when the work was completed. I think I read in the paper the school children in the neighborhood were invited to see it just before the opening week. Upon completion of the Kurosaki Bypass, industries that will now benefit in the Higashida District, where the century old Yahata Iron & Steel was based, consist of cogeneration, smart grids, home and building energy management systems, and medical institutions. My friend said the final lifting was done in the dead of night in late December with vehicle traffic suspended. When I visited the site in January, the work was already completed. All the clutter I saw last year was gone. Showing outside the Yahata JR Station were recorded videos of the ramp bridge being lifted by a 3,000 ton crane.

The second time I met Mitchie, he brought his ”baby” bolt and the mock photo of the bolt set on a rocket ready to go adorned with the rising sun flag, his way of rejoicing predominance of his bolts. We cheered over cups of coffee for what his bolts have achieved. Thousands of his bolts were mounted on the ramp bridge. His bolts were also used on high-rise buildings, including Abeno-Haruka Tower in Osaka, currently the tallest building in Japan, and the Tokyo Sky Tree Tower and the new Olympic Stadium recently opened with countless number of his bolts. Bolts are quintessential in airplanes, vehicles and in the space industry.

I was not an engineer but during World War II, I got mobilized for about two years as a student worker at an airplane factory, which was converted from a spinning mill. After receiving intensive training by an arsenal mechanic, I was assigned to wing panel tack riveting, using an air drill. I found caulking aluminum tack not an easy job. They often ended up deformed to be chiseled off. Today, we live in a world where mistakes are never tolerated! 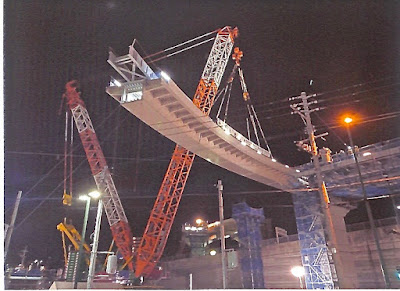