A good friend is a great blessing. Our friendship, based on Toastmastering and deepened with travel, led to the book Dear Miss Breed that I translated to become registered with the Japanese National Diet Library.

In early 2000, our Toastmasters Club in Kitakyushu invited Professor Kobayashi from Shimonoseki City University to a meeting. An excellent speaker, in an ice breaker speech, Kobayashi Sensei talked about his young days in Hawaii. We learned that he graduated from the University of Hawaii with a master's degree and later earned a PhD. In 2004, he gave his retirement lecture "50 years as an Asian researcher" to Shimonoseki citizen and his students, and returned to Yokohama to live with his family. In the fall of 2006, the Kitakyushu Club invited Kobayashi Sensei to join them in attending the Toastmasters Convention held in Taiwan. He gladly accepted it, and so, three of us, Oshiumi, Kobayashi and I flew down to Kaoshiung representing Kitakyushu. There he volunteered as an ad-hoc speech demonstrator during the training sessions and was immediately surrounded by young Taiwanese fans throughout the convention. He happened to be fluent in Chinese and was a big help when we traveled to Taipei via Tainan, Chiayi, Poan, etc. and visited Taiwanese industries and universities on the way back. 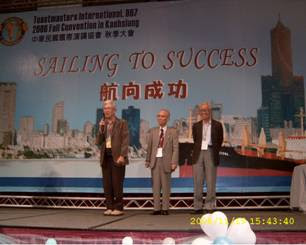 A photo from Taiwan Toastmasters Conference. I am addressing the audience (of about 1,000 people) as a representative of Kitkayushu as well as District 76 (Japan) Toastmasters. Behind me were Masaki Oshiumi and Eiji Kobayashi.

One of the books he wrote in 1979, Developments of Indus River, Agriculture and Water Problems in India/Pakistan, was highly acclaimed by Japanese financiers and industrialists, Asian scholars as the best introduction available of the area. He gave detailed history of how India and Pakistan disputed water distribution and how the Tarbela Dam, the world's largest embankment dam, helped solve the problems from the Asian Development banker perspective. He was a banker himself then, before he became an educator.

I forgot that I sent the publication notice of my translation to the professor. After a month long trip to California, I found his letter, dated March, waiting for me upon my return in April.

He wrote that he was so impressed with the translation of the book that he felt the need to help promote the book. He voluntarily sent his book review to the biannual newsletter published by and for the ex-employee association of the National Diet Library. Attached to the letter he sent me was the said Newsletter No. 44 dated March l, 2009 with a full page of the book review.

My quick search yielded the following designation of my book at the National Diet Library as follows:

Thank you, Kobayashi Sensei. I feel really honored. I'm hoping that I may travel again, not only to Taiwan, but to other Asian countries where your expertise shines.

As in the subtitle, the book depicts "the true and heart warming stories of Japanese American children and a librarian Clara Breed" in San Diego, California. During World War II,.Clara taught the children of the neighborhood how to enjoy reading and was popular as their friend.

It all started the day of December 8, 1941, when the Imperial Japanese forces raided Pearl Harbor. I myself remember the day well as a first grader. However, until I read the book, I didn't know what happened to the Japanese Americans in the West Coast, as a consequence of the raid. In reflection of the Americans' terrible fear of a possible Japanese invasion of California, then President Roosevelt issued his Executive Order to evacuate all those people who had Japanese ancestry, regardless of their status of naturalization.

Suddenly on April 8, 1942, a total of 120,000 Japanese Americans were interned into relocation camps scattered internally off the coast lines. The children Clara Breed served as her students were first sent to the Los Angeles Assembly Center. There they had to live in horse stalls turned housing, which emitted a most unpleasant odor.

It was shocking to Clara Breed who believed incarceration based on being a descendant of a particular nation was a mistake. She began to receive letters from her children, all with the heading "Dear Miss Breed." Children wrote about their camp lives - barbed wire surroundings, watchtower guns aimed at those inside rather than intruders from outside, waiting in long lines for everything from meals, laundry, showers, mail, etc. One young man (Tetsu), desperate from seeing nothing but shanties wrote that he was betrayed by his mother country. They were then herded into a permanent detention camp in Poston, Arizona, in a desert full of snakes, scorpions, tumble weeds. There they had to face extreme summer heat, sand storms, freezing air and bitter coldness in winter. Riots broke out among those who could not bear their situation.

Clara Breed continued to ship books to children in the camps for encouragement. She sent not only books but also some daily necessities, shoes, woolen yarns, socks as requested by children in their letters along with candy and gum. Christmas presents Clara sent particularly cheered up the children. In their homesickness they asked Clara to update them on news from San Diego. Soon some of them graduated from high school and joined the American military or entered universities, leaving their camps with WRA permissions. San Diego, a naval town, however, was reportedly still hostile toward them and children hesitated to return there despite their homesickness.

In 1970, Miss Clara Breed, then promoted to the Head Librarian, had a great reunion with all the children who finally returned to San Diego. She retired from the the San Diego Library system after 42 years of service and passed away in 1994 at the age of 88. Her creed was "I can't imagine life without books. Reading is food for the spirit and immeasurable."

Author Joanne Oppenheim (born 1934) has written many children books. She happened to see the "Dear Miss Breed" letters in the National Japanese American Museum and contacted the writers of those letters to interview them in hopes of putting faces to Breed's human characters and to document the period of infamy in American history.

I know the translator, Rio Imamura, who worked for a San Diego manufacturer and was a resident there for over 20 years. We are fortunate to be able to read Oppenheim's book in Japanese published by Kashiwa Shobo. Thanks to his hard work, explanations of photos, illustrations, footnotes and indexes are all painstakingly translated for easy reference. I was glad to see that all the library terminology was correctly translated.

America saw the birth of the first African American President, Barak Obama, who proclaimed "Change". However, has America really changed as in President Obama's slogan? Am I the only one who feels that the dark shadow of racial discrimination and injustice still continues to linger in America and elsewhere? 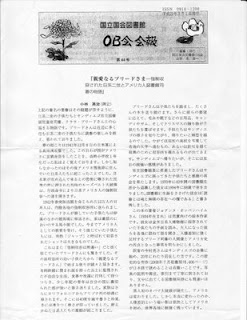 Posted by riodan at 1:06 PM No comments:

The Song that Sent Bobby Kennedy to the Podium 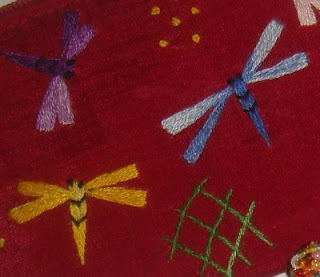 "Homeways on pre sunset
When was it that I saw them on Mom's back?
Color deepening red dragonflies!"

While waiting for the Newbury Park Library to open in California, my wife and I browsed the gallery of local artists and sculptors next door. Among the large frame mountain and oceanic paintings, we found two modest sized photographs of a red dragonfly perched on the point of a reed, absolutely still. We marveled at the work for a while.

As I was exiting the gallery, my wife beckoned me to return to the gallery. She was talking with an elderly gentleman on duty. She introduced him to me as the photographer of the red dragonfly. Apparently he noticed that we showed interest in his work and wanted to talk to us. I wrote out the above lyrics from a Japanese children's song and told him it is a popular song called "Akatonbo".

On my drive back home from the library I recalled a 1962 incident involving this particular "Akatonbo" song and the then U.S. Attorney General Bobby Kennedy's visit to Waseda University in Tokyo, witnessed by one of the students in attendance. He was a student from Taiwan, experiencing changes in life, language and culture. He related the incident to his fellow countrymen, asking them if the Taiwanese had a song like Akatonbo that could unify divided minds when it is most needed.

After dinner that night I recounted the following tale to my wife, daughter and her husband.

I was under the impression that Bobby Kennedy visited Waseda University by request and a transcript of his speech would be available. I was working in New York at that time. Information was not readily accessible in those days as it is today. After searching through all available speeches by Bobby Kennedy, I was not able to find a copy of that particular speech. To this day I have not been able to find his Waseda speech.

Upon returning to Japan to retire, I started digging again, especially for the Waseda speech. Then I ran across a blog written by the Taiwanese student described above. He wrote that Bobby Kennedy was not officially scheduled to speak that day. It was a day of student debates. Bobby happened to attend the debate with hopes of getting a chance to speak.

The eventful debate was chaotic from the start. As time went on, it took a turn for the worse, escalated into antagonism, and the division was driven further apart uncontrollably. Bobby stood on stage perplexed and bewildered. A depressed mood fell over the crowd with no rescue in sight. Suddenly someone started singing or humming from the corner of the auditorium, inaudible at first, then gradually the lyrics took shape and fell into rhythm of the song "Akatonbo." More and more people joined in, forming a chorus. Everyone was singing with one voice, loud and proud, forgetting hatred and erasing the chaos. The Akatonbo song eventually restored civility and invited Bobby to take the podium. Students, afresh from the song, were eager to listen to what he had to say.

After years of searching, I found that Bobby did speak to the students. On his return to the U.S., Bobby published his account of his travels in a book entitled Just Friends and Brave Enemies. He used the royalties from the book to create the Robert Kennedy Scholarship, which he donated to Waseda University.

Here's my translation of the complete song:

Homeways on pre sunset
When was it that I saw them last on Mom's back?
Color deepening red dragonflies!

Blurred in memory is the day
When the mountain field mulberries
picked and carried in a small basket?

At age 15 my beloved maid got married
I haven't heard from her since
My first love!

Greg Irwin, an American songwriter translated the lyrics differently by ryhthm and tone.

Just fifteen she went away one day
Married then so young

Like a sister lost. I loved and missed her
Letters never seemed to come
Posted by riodan at 1:51 PM No comments: