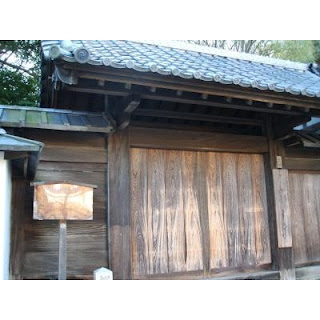 The last stop of our castle tour was the "Bogwood House", where Naosuke Ii spent his youth and adulthood as a single man as the 14th son of Ienaka, 11th generation but not in line of succession as a child by Ienaka's concubine. Most of his elder brothers left Ii as adopted children and Naosuke too was called to Edo together with his younger brother for such an arrangement. His brother was chosen to stay and Naosuke returned to Hikone crestfallen. As a child, he was taken by his father, already retired, to teachers of both literary and military arts and he yearned to study local Japanese classics, tea ceremony, poems, and develop swordsmanship like archery and the way of quick draw. However, after his father passed away, he saw his destiny as a bogwood tree, so naming his residence, and lamented his ill fortune. The knowledge needed to administer as Tokugawa's Great Elder was nurtured during this limelight period. At the time, he was not well off financially at all.

His career suddenly took a turn when his other brother who was supposed to succeed Naoaki Ii, 12th generation, passed away. And when Naoaki passed, Naosuke inherited Ii Clan's 350,000 Koku (see Notes l) as 13th Hikone lord. Naosuke was reported to have distributed 50,000 Ryos (see Notes 2) among his clan samurais, merchants and farmers according to the bequeathed will of Naoaki, his foster father. The generous 50,000 Ryos were comparable to a year’s income in the Ii Clan. He also financially assisted temples and the like, reinvigorated Kodokan, school for children, banned the red light district, and the people hailed him as benevolent lord.

Naosuke's performance as Tokugawa's protocol officer, which included foreign affairs, steadily pushed him up the ranks. He headed the coast guard along Tokyo Bay and circumvented the black ship threat and proposed his own defense plans which were highly praised. He declined to accept Chief Minister (Great Elder) position at first, in view of the impending downfall of Tokugawa. He had to deal with not only black ships but confrontations among clans as to who to select as the next heir to Tokugawa, relations with emperor and courtiers in Kyoto and the rising movement to "Restore the Emperor and Repulse Foreigners." He probably anticipated what could happen once he had taken the reigns. I wrote in detail why he was assassinated in Part 1. Naosuke antagonized Mito Clan Samurais when his Ansei Purge involved harsh punishments against Mito. Naosuke, despite the attack warning, didn't reinforce security more than the number stipulated by Tokugawa.

As mentioned earlier, Naosuke studied Japanese Classics and revered the emperor but remained as Tokugawa's caretaker. It is a tragic tale of a bogwood-to-be-samurai who grabbed prestige and power second only to the Shogun. After Naosuke’s death the Ii family was disgraced for many years. Recently, however, Ii’s actions have been looked at in a more favorable light and Ii Naosuke has taken his place as one of the most important political figures in Japanese history.

1) "Koku" was a unit of fief wealth. Originally one Koku was the volume of rice a person can eat in one year
2) "Ryo" was an Edo period currency, available as Oban (large size coin of higher denominations) and Koban (small size coin of lower denominations).
3) Hikone Museum exhibits artworks of both Sekigahara Battle and Sakurada Gate Incident

"I stepped out into town in the early morning. I was surprised that it was brighter than the lakeside, which was still in the dark. Shaded areas here and there in the street corners looked graceful. It is still February. I smelled winter morning in the lingering smoke coming from burning dead leaves. The castle stone steps proved awkward for me. Breathing heavily while climbing, I glimpsed a group of dozen men coming down spread out evenly. They all looked around 50 years of age or older, all clad in plain suits and coats, speechless, yet keeping pace together and breathing in unison. 'Clansmen,' I muttered."

- from "Strolling in Omi", by Ryotaro Shiba

February is almost over. March is taking its time arriving but will most likely hurry along. Then what? A sudden burgeoning of cherry blossoms without mercy! You don't have a month. Are you ready? Time's up!

I had a bitter-sweet experience. Our San Diego Business Fellow Veterans gather every mid-April. The secretariat by turn picks the venue and invites us. We usually meet in Kyoto and Osaka and I take the Shinkansen (bullet train) from Kitakyushu to be in time for the gathering. Last year, the venue was at Hikone in Omi District. The Shinkansen doesn't stop at Hikone and you have to take a local train from Kyoto, which may take an hour.

I was late in making hotel reservations and found no vacancy in decent Hikone hotels. I panicked. Then I changed my strategy. I searched the satellite towns, near Hikone. It worked. I got a hotel in Minami Hikone (southern Hikone), which happened to be very close to the station. Hikone was all hustle and bustle the following day with thousands of visitors viewing the cherry-blossoms planted around the moat and inside Hikone Castle.

Now the story starts in 1590 from the Battle of Sekigahara near the current Ogaki City in Gifu Prefecture between two great clans, Tokugawa and Toyotomi. General Hideyoshi Toyotomi died shortly after his retreat from Korea without accomplishing his wild dream of conquering the Ming Dynasty. Tokugawa claimed his turn and opened hostilities. Mitsunari Ishida, Hideyoshi's administrator, raised an army in support of Hideyori, Hideyoshi's son, but he could not mobilize enough supporters. Ieyasu Tokugawa won the battle by forming a coalition of warlord and their followers.

Naomasa Ii, who served as Ieyasu’s page, valiantly fought and defeated Mitsunari and was endowed with the Hikone land, including Sawa Castle owned by Mitsunari, the defeated. It was his son who established Hikone as a strategic stronghold, since Sawa Castle was a mountainous castle, and the Ii Clan had to face off not only western Japan Daimyos, but supervise Lake Biwa seaway transportation on behalf of the Tokugawa clan. Hikone was the main route and gateway for eastern Daimyos to enter into Kyoto.

The historians exaggerated it as a decisive war of the nation which attracted troops from all parts of Japan. Yes, soldiers assembled, but as fence sitters to see which way the wind would blow. Mitsunari Ishida lacked actual battle experience and the cunning Ieyasu Tokugawa took advantage to enlist opportunists.

Hikone Castle took 20 years to complete, with carpenters and masons mostly mobilized from the east. Stones, towers and gates were transplanted from the old local castles and temples, like Otsu, Nagahama, Sawa, etc. Hikone Castle survived 400 years as one of the four designated national treasures, the others being Himeji, Matsumoto and Inuyama.

There were three crises during which Hikone Castle could have been lost. The first one was the decommissioning crisis, when Naosuke Ii (1815-1860), the 13th generation, Chief Minister of the Tokugawa clan, responsible for signing the Harris Treaty without imperial sanction, carried out the so-called Ansei Purge to quell opposition, inviting grudges. He was assassinated by enemy Samurais, and the Ii clan was discredited from the Tokugawas.

The second was when it escaped the Meiji Restoration War, because the Ii Clan was left out of the war altogether. The Aizu Clan, replacing Ii Clan as the Kyoto safeguarding agent for Tokugawa, ran the gauntlet of Meiji Restoration Troops and eventually lost its castle in Aizu-Wakamatsu in Fukushima in the fire.

The third time was when castles in the country were all being demolished when the Tokugawa period ended. Emperor Meiji, who stayed at Hikone Castle, wanted to preserve it because of its true beauty.

We Japanese are really blessed to be able to see the original Hikone Castle today.

Accompanied by two volunteer guides, we took tours of the four hectare (10 acres) castle area including Genkyuen Garden. Before entering the front gate, we saw a hall turret and a flat Edo stable, which is the only stable of this kind existing today. 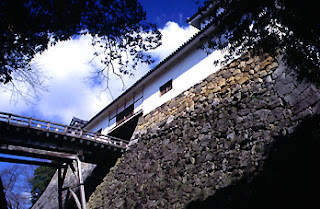 On our way to the hilltop, we walked under a unique curved and symmetrical wooden bridge, which gives the impression of a balancing scale. According to our guide, the bridge connecting the two towers can easily be collapsed in the event of an emergency. The supporting stone walls are also of special layering called burdock blocking, also collapsible. We went through authentic Bell and Drum Towers to reach the main keep. The view of Lake Biwa and the flowing river and moat complex from the castle keep were truly gorgeous.

Coming down, we entered Genkyuen Garden, at the opposite base of the castle, leading to the Konki Children Park where the statue of Naosuke Ii stands. Genkyuen is one of the best three Daimyo Gardens*, which offers the pleasure of Japanese landscapes for every season - new life of spring, deep green of summer, brilliant foliage of fall and quiet snow of winter. Modeled after a detached palace of Emperor Genso of the Tang Dynasty in ancient China, this Chisen-kaiyu style garden (landscaped around a large pond) was constructed in 1677. It incorporates the Hoshodai Guesthouse built on an artificial hill, and trees and rocks imitate the famous Eight Views of Omi region, Biwa Lake, Chikubujima Island and the White Rocks of Oki.

The 400th Annivesary of Hikone Castle was held in 2007 from March to September with a variety of cultural celebratory events such as cherry blossom festivals, music concerts, guided historical city walk tours, clean-up movement, etc. 760,000 visitors were recorded during a 250 day period, well over the targeted half a million, bringing a rippling effect on Hikone's economy.

Getting back to the San Diego Business Veterans Meeting - about 40 members participated last spring and after the tour we had a great luncheon party at Hikone Castle Hotel facing the moat surrounded by beautiful cherry trees.