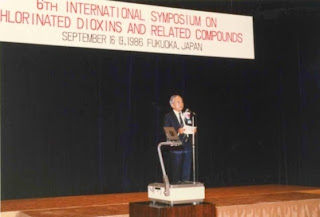 Our paths finally crossed on the 60th anniversary of Fukuoka Toastmasters, after a number of prior missed opportunities. Right after group photograph for the event, we finally had a chance to talk. We found we had both lived in New York in the 1960s. He was a Fulbright Scholar at Sloan Kettering Institute from 1966 to 1969 researching carcinogens. I was a liaison expatriate working in Manhattan for a Japanese electronic manufacturer during most of the sixties. I mentioned the name of the Rockefeller University in the Upper East Side and he said Sloan Kettering is in the neighborhood.

His name is Yoshito Masuda, Doctor of Pharmacy, now retired from the Daiichi Yakka Daigaku, a private College of Pharmaceutical Science, and a member of the Fukuoka Toastmasters between 1970 and 1980 and then re-enrolled since 2000 to date. I asked about Fukuoka Founder Usui and 2nd President Tadokoro. Dr. Masuda met both Fukuoka founders. Usui and Masuda lived in the same eastern Fukuoka neighborhood. I thought Usui relocated with his family from Fukuoka to Kitakyushu but I was wrong. On weekends Usui returned home and occasionally attended Fukuoka Toastmasters meetings. Per Masuda, Tadokoro served as president intermittently, for an overall period of approximately 5 years. Tadokoro, as a phonetic specialist, was strict in pronunciation. Masuda, himself, also served as president in 1980 before he went on furlough with Toastmasters as his work got busier.

In 1986, Dr. Masuda received a call to organize a convention, which would demonstrate his numerous abilities and experience - his dioxin expertise, a grant offer from his University, and Toastmastering and logistical skills. The Advisory Board to the International Symposium on Chlorinated Dioxins and Related Compounds chose Fukuoka Japan as the 6th convention venue and touted him as the Chairman of the Symposium. The venues prior to Fukuoka included Rome, Washington, DC, Salzburg, Ottawa and Bayreuth (Germany), all prominent international cities.

Fukuoka was chosen first in Japan, well ahead of Tokyo (2007) and Kyoto (1994), for two special discussions: 1) Japan presented the Fukuoka "Kanemi" rice oil poisoning paper in Rome (the 1st Symposium) and the name Fukuoka was remembered by the Advisory Board; and 2) scores of papers were presented on the Agent Orange aftermath from the Vietnam War, which attracted many participants. 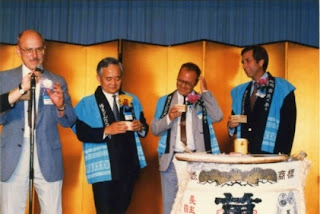 Dr. Masuda presided over the symposium for four days at the Nishitetsu Grand Hotel where 280 participants assembled and presented papers. Two hundred were foreign participants and 80 were Japanese. He recalled the heavier proportion of foreign participants impressed the then Nishitetsu Grand Hotel Manager, as the opposite was generally observed, i.e. overwhelming Japanese attendees in most international conferences in Fukuoka during the ‘80s. The alerted local TV stations highlighted the conference and Dr. Masuda gave an in-depth interview.

In 2004, Dr. Masuda received an out of the blue invitation to Kiev, Ukraine, together with German and American doctors. Facing election, Viktor Yushchenko, 3rd President of Ukraine, was entertained by Russian officials at a Sushi bar. After dinner the face of Yushchenko showed severe chloracne, although no symptoms appeared on the Russians. Apparently Kiev worried for the President and a committee was formed, inviting dioxin specialists, to understand what care and caution might be needed in the future. (Currently relations between Russia and Ukraine are delicate.) He could not share more details. I'm proud that Fukuoka Toastmasters has a world-class scholar on dioxin, depended upon worldwide. 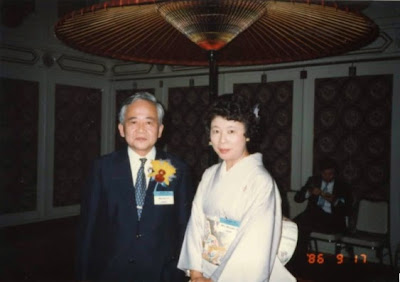 Posted by riodan at 8:44 AM No comments:

Fukuoka Convention you hosted last year won the nation's Toastmasters recognition as the pan-Kyushu’s conning tower, including the bordering prefectures.

I salute you and your dedicated corps of volunteers. You were the salt of the earth throughout the convention. My wife, unfortunately, had her knee meniscus damaged and we were only able to attend on the final day. However, I planned a quixotic challenge of honoring, in vain, Fukuoka Founder Usui, the first Japanese Toastmaster behind the scenes. I'm not going into the inside story tonight. DTM Mohri, who chaired the Convention, knows the details.

TM Usui was the founder but he left Fukuoka shortly for Kitakyushu when he was hired to be on the faculty of Kitakyushu University. He left everything to the 2nd President Tadokoro. It was President Tadokoro who took on the gritty job and faced the full consequences. TM Tadokoro and I both are hearing impaired and as the proverb says "Fellow sufferers pity each other."

TM Tadokoro and I exchanged letters often and he sent me books he wrote. He reminisced about the great honor of being invited to the 80th birthday of Dr. Ralph Smedley in Santa Ana in 1957. He also confided to me that he felt relieved from the heavy burden entrusted on him by Founder Usui. He was happy to have kept his pledge to Founder Usui, a great episode of Fukuoka Founders.

In closing I wish to pay tribute to the Founders quoting TM Tadokoro's essay titled "A Road to Authentic Speaker."

"Strain your eyes in uttering any one word, uttering the first word and the stressed one of a sentence. It is the way you depart from the borrowed language and make it of your own."

May both founders rest easy now, assured that the group they founded will strive to continue the tradition of excellence they established. 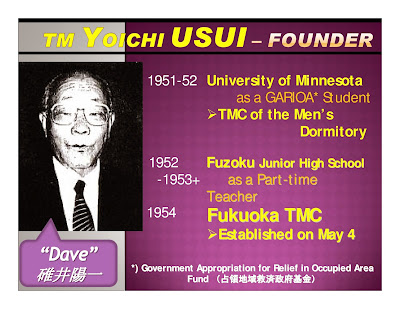 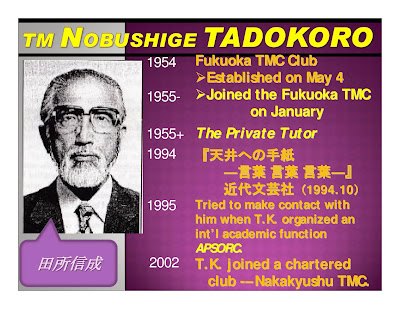 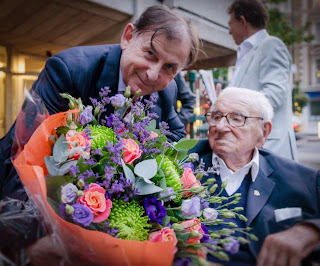 "The persecution of Jews in the General Government in Polish territory gradually worsened in its cruelty. In 1939 and1940 they were forced to wear the Star of David and were herded together and confined in ghettos. In 1941 and1942 this unadulterated sadism was fully revealed. And then a thinking man, who had overcome his inner cowardice, simply had to help. There was no other choice."
- Oskar Schindler, in a 1964 interview.

"There is a difference between Passive Goodness and Active Goodness, which is the giving of one’s time and energy, in the alleviation of pain and suffering. It entails going out, finding and helping those in suffering and in danger and not merely leading an exemplary life in the purely passive way of doing no wrong."
- Nicholas Winton, in a letter written in 1939

"There is nothing wrong in saving many people's lives.... The spirit of humanity, philanthropy... neighborly friendship... with this spirit, I ventured to do what I did, confronting this most difficult situation and because of this reason, I went ahead with redoubled courage."
- Chiune Sugihara

Academy Award winning Schindler's List by Steven Spielberg took the world by storm two decades ago. In Europe, a decade later, a British centenarian, Nickolas Winton (born 1909), was recognized and people petitioned for him to receive the Nobel Prize for peace, as he transported 669 Jewish children from Prague to London, all of whom were adopted in England. The 2011 documentary Nicky's Family by Matej Minac won a few world film festival awards. Queen Elizabeth knighted Nicholas and CBS in United States featured him on 60 Minutes.

My American friend who read my blog reminded me of Nicholas Winton, so I referred it to my Czech friend Valerie. Valerie responded with a more detailed story about one of the Kindertransport children.

"Kindertransport Operations": several countries rescued Jewish children away from the Nazis in 1939. Poland, Germany, France, Holland, Sweden, and the Czech Republic are erecting memorial statues in memory of these successful operations.

Nicholas Winton, Jewish, born in Germany, became a British stockbroker. He was asked by his diplomat friend "how about lending a hand to the desperate Jewish families?" Canceling his ski trip to Switzerland, Nicholas flew to Prague and set up a recruiting space, first at the open Winceslas Square, then moved inside the Hotel Evropa where he stayed.

In 2005 I had a chance to visit Winceslas Square for half a day, admiring its historic significance and squinting saint statues. I visited art nouveau style hotels; including Hotel Evrope, whose façade was designed by Jan Letzel, the same architect who did the UNESCO Heritage Hiroshima dome. I'm happy to see this hotel has a connection between Jan Letzel and Nicholas Winton.

Of all the Kindertransport art sculptures, two at the Prague Railway Central Station (the statue is on the Prague main train station on the platform from where the Winton´s trains with children left for Great Britain) and London's Liverpool Street Station outshine all others, giving thanks to the courageous act of Nicholas Winton. What impressed me was that the records of Nicholas Winton were boxed and forgotten in the attic, unbeknownst to Grete, his wife. In 1988, Grete found a scrapbook from 1939 with a complete list of names and a few letters from parents of the children addressed to Nicholas. That was how Grete found out what kind of man her husband truly was. 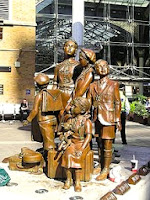 My Czech friend Valerie lives in Pardubice, about 100 km east of Prague. She emailed to me that this past March, she attended "an evening with Lady Milena Grenfell-Baines" event at Pardubice University. (I was a lucky traveler to have once stayed at this Pardubice University dorm). Lady Milena Grenfell-Baines was one of the 669 Winton children. Valerie sent me slides of photos of this event and I'm happy to share them with my readers.

Lady Milena, upon arriving at Liverpool Street Station, London, met her guardian "the Radcliffes" who looked after her for a year when she was joined by her parents. She spoke Czech and English and at age 16, she left for France as an au pair for two years. Her father found work in Preston, Lancashire where her family re-united. At age 25 Milena met her late husband Sir George Grenfell-Baines, a well-known architect. Milena, published Czech recipe books using the Remoska, a Czech made electric cooking pot. She was on air with her cooking lessons, while organizing England-Czech sports and music exchange, as well as charity programs as sponsor/interpreter. Lately, she has been addressing European audiences regarding her Kindertransport experience. 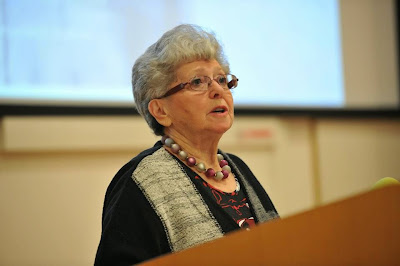 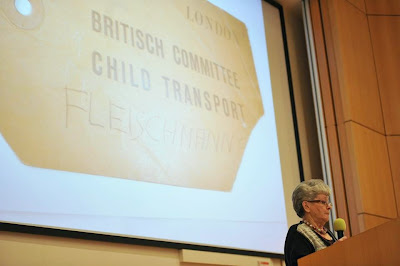 Milena has maintained a close relationship with Sir Nicholas Winton. In 2001 Milena was presented with the Jan Masaryk ‘Gratis Agit’ award, by the Czech Minister of Foreign Affairs for remaining a faithful patriot, an ambassador of goodwill, culture and history for the Czech Republic.