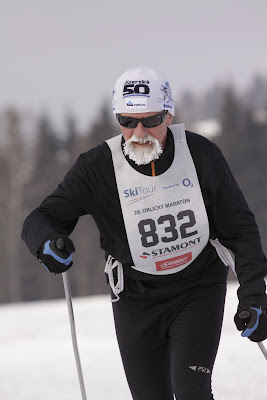 I am happy to reintroduce my long-time Czech friend Jiri Psenicka, an electrical engineer, Toastmaster, Skoda car driver, eight times grandfather, and this time as a Czech "Orlicky" Cross-Country Skiing half-marathoner. His photo appears in my blog from 2009, "Jan Letzel", Hiroshima Atomic Dome architect. He had sent me a number of his skiing photos before with his grandchildren, but this photo I received a week ago is terrific, catching his sparkling and glorious moment during and after a cross country run. He wrote that he bought it from Jindra Krammer, a professional photographer.

It was Jiri who drove me in his Skoda to Jan Letzel University of Civil Architecture from Pardubice to Nachod, close to the border of Poland. That is where the Czech Republic protrudes deep into Poland along the Krkonose Mountain Ranges and Orlicky is where the protrusion ends. I'm guessing the mountains taper off down the slopes to the plains, and the groomed cross country trails invite skiers in the wintertime with downhill runs of varying difficulty. Jiri says Orlicky may be 35km away from Nachod and 50km from Pardubice where he lives. I grew up unfortunately without snow and never skied. I thought of learning after getting a job, but abandoned the idea when my close friend from high school broke his leg on his skiing trip. My sour hindsight is that Japan has no flat land for an easier challenge.

This morning I had a dental appointment in Kokura. It started snowing on my way home. Flickering snowflakes touched my lips and earlobes and quickly melted away. I know it won't stay in Kyushu. In the overcast gray sky, the sun shivers with sorrow and the forecast predicts snowy weather all along the Japan Sea coastal towns and cities, and northern Japan, including Hokkaido. The Fire Department recorded over 100 people dead and 600 persons injured to date since Nov l, 2011, most causes of death being from roof falls and other accidents that occur during snow removal, snow avalanches, etc. Shoveling continues as snow recording 500 cm in Aomori, 400cm in Niigata, 300 cm in Toyooka, Hyogo. Snowfall is unusually heavy this year. My recollection was that snowfall usually links between Tokyo and New York, so I asked my Washington friend how's snow. I got an answer "no snow there". "Yes" answer came from Jiri, with the photo and "joy of cross country" speech he gave at his Pardubice home Toastmasters. The following is a partial quote from his speech.


It happened 15 years ago. I took part in the Orlicky Marathon cross-country skiing race held each year on the first Sunday of February at Destne in the Orlicke Mountains. The snow conditions that year were treacherous. There was enough snow in the mountains then, but the problem was with its consistency. A couple of days before the race there was a slight thaw, temperatures got above zero and the snow got wet. Then, suddenly, frosts came back and the snow on all the meadows across which the race was to be held got very hard and thick crusted on top. The race was in the classic style, i.e. no skating allowed. The organizers just made two parallel tracks using a snow scooter pulling the device which made the 4 ruts over the hills. They had prepared the track before the frosts came back, apparently, so the tracks were icy, shining and sinister. It was not easy to find good waxing for that. But having used a special combination of green and violet Swix Klister, I thought I made a good choice and felt elated in the first leg of the race.

When I was climbing up, panting heavily, I turned my head right. I saw a young woman approaching, aged not more than 20, jet black hair in one thick braid on the lovely curve of her back leaning forward. In fact, she was overtaking me! What could I do, she was faster than me! But when I looked at her for the second time, I noticed something glistening in the sun - a shining diamond in the shape of raindrop hanging on an almost invisible thread. This assembly was about 15 cm under the nose of the pretty girl. I thought to myself: "She would certainly look lovelier, had she used her handkerchief", but no one is perfect. Cross-country skiing is like a marriage, you must take the rough with the smooth!

We soon reached the top of the hill, and the girl went into my track and was about 50 meter in front of me. And now we were gliding down the hill, the girl still in the same track, her skis were faster, she was leaving me behind. I took the posture called in Czech "Low Egg". We both were accelerating significantly. The wind was swishing past my ears and I liked it. I watched the girl: "Will I catch up with her now?" But then it happened: The girl fell, right in front of me! "Oh, God, what shall I do now," I thought, but just in a fraction of second. I stepped aside, onto the crust, trying to avoid her. I did, though only for a decimeter or two. It was a close shave! But I was on the top of the crust! Suddenly, the tip of my right ski got underneath the crust and what followed was a tiger's leap! The principle of inertia worked and my body was flying, its axis perfectly horizontal. I landed on the crust with the head forward. I could see stars or sparkles when my nose hit the icy crust. Then there was silence. "Are you OK?" I heard the girl who had picked herself up faster than me and overtook me again. "Yeah, I think," I answered boldly. But my nose was bleeding. I put some snow on my forehead, but it did not help much. There were red spots in the snow around me like from a badly shot roe-buck. Never mind, I said to myself. Now I must run really fast so that the blood will get dry.


Jiri, on that day, participated in two races - 20k and 40k, despite the bruise. And only after the crossing the 40k goal line did he go see the site doctor for treatment. It must have been painful but he cracked jokes about the joy of cross-country. An iron man!

On February 4 this year, he joined 20k in the men's 61+ group. He recorded 1:48:46:8, securing 14th position out of 26 contenders. Wow! Super accomplishment! I congratulated him by return email. He confided to me that he first attended the Orlicky Marathon in 1986. He had raced in the 40k event six times since 1986 and 20k twelve times since 1999. A cross country veteran! Since I'm not a skier, I asked my friend, an Alpen skier born in Hokkaido, how he regards cross-country games. He commented that it's very laborious and real wearing sport and it's always awesome to see icicles hanging from their faces!

My salute to Jiri's zeal and joy of life! 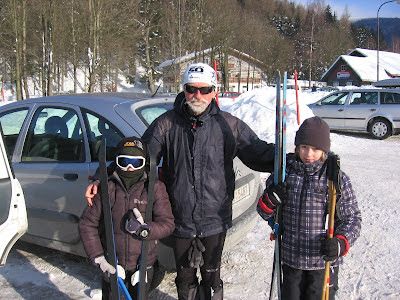 From Taipei with Love 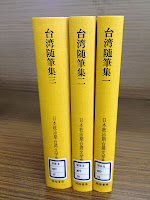 My Taiwan friends commented that this portrayal is unlikely in today's Taipei. "You have to be further out to suburban fields to experience the same." She may be right. Maybe I'm nostalgic but I'm impressed with the way the letter was written. So I translated it to share with the readers at large.

The season I like best in Taipei is fall, from October going into January. During those months, we enjoy a spell of fine weather, with the sweet scent of fragrant olive in the air, red and green bamboo sprouts rising and adding colors, skylarks chattering up high in the field, shrikes shrieking high and low, often sharp, to strain listeners' ears, flocks of white eyes and flying spice finch warbling and chirping, while doves coos slowly infiltrating from afar, eagles flying high in a circle, and wagtails tiptoeing, tail-shaking agile in the field, forgetting twittering. All these hallmark tranquility is surely bliss to me, who now resides in Taipei.

Then, forage crops, the pleasures of the table! Gigantic Zabon! I can't even hold with my two hands. Pummelos are smaller but taste better than Zabon. Colorful persimmons. Sweet sugar canes with juicy syrup. So affluent that we might overlook familiar bananas without intention. In December, citrus of all kinds, including Ponkan, Tankan and Sekkan appear on the fruit markets - side topics to the pleasure of the Japanese expatriates. 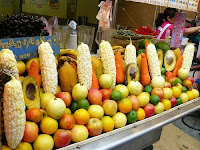 Let me go in a little more detail about fruits of Taiwan. Pears, apples, summer mandarins and peaches come from Japan but all the others are readily produced in Taiwan. We see bananas, papayas and watermelons all year round. The season of watermelons is from May to the end of August. The prime time of papayas is in December. Peaches, whose flowers bloom in January and February bear scanty fruits around the beginning of May. Plums, about the end of May, grapes from mid-June, pineapples, dragon fruits, mangos, wax apples all come about July and August. Generally said those from southern Taiwan taste good and are shaped well, as compared with those produced in northern Taiwan, perhaps because of the climate difference.

Rice is produced twice in Taiwan, June and October. In January and February, we have cucumbers, green garden peas and bamboo sprouts. We can use plenty of spinach and Japanese cabbage unsparingly, as they are less expensive than in Japan.

Many kinds of fish are also available during winter. Sea breams and tunas among them are caught and shipped to Japan. Meats vary from yellow ox, buffalo, and whale to pork and chicken. Yellow ox's have a distinctive smell. Buffalo meats are said to be a little harder to chew. Whale meat texture depends on how they are cooked. Taiwanese do not eat yellow ox and buffalo much but eat a lot of pork often.

I'm sorry that I talked about foods like a greedy fad. I confessed to you that I'm a gourmet person. Listening to me, I bet you imagine Taiwan as paradise and feel like coming.

It's November here now, and getting chilly somewhat in the morning and in the evening. It's about time to change clothes from serge coat to lined garment. Those of us who live in Taipei and Keelung must prepare one set of winter wear at least. I heard people in the south like Kaohsiung and Pingtong don't need them. Just a combination of yukata and haori may do.
Posted by riodan at 2:06 PM 2 comments: