Pray day and night to the southern sky
where Japan is
Bracing up with chins high
- Osamu Seno, 1908-1995, author of the Birch Diary 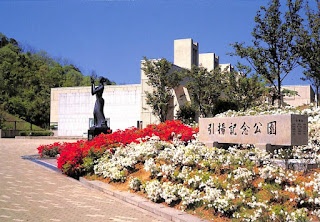 A free flyer I picked up at the Maizuru Repatriation Museum was written by Torajiro Wakasa, resident of Kyotango City, Kyoto. According to his brief history, he was born in 1926, finished Army Airborne Communication Academy in January 1945, was sent to Anshan Airport in April, and then sent to Siberia in the fall of 1945. He returned to Maizuru Port in the summer of 1948. He succeeded father's profession of Tango silk crepes in 1952, acquired master title license of flower arrangements of Mibu School in 1987 and opened his own flower arrangement school.

Torajiro and his 2000 mates were sent to Angren, Uzbekistan, 200km east of Tashkent. He wrote that Angren was in a mountain 2000 meters above sea level, on the west end of the Pamil Mountains, close to the Himalayan Peaks. His description of general winter was of despair and misery. Hunger always dogged them.

Russian Nobel Laureate Aleksandr Solzhenitsyn (1918-2008) mentions Angren in his Gulag Archipelago as one of the Soviet towns that grew next to a gulag labor camp of coal mines. The dissolution of the Soviet Union seemed to have resulted in the demise of the coal mines.

What cheered up Torajiro’s spirit were wild tulip and poppy flowers blooming with the arrival of spring, turning mountains flaming crimson. He remembered his father arranging flowers when he was a little boy. He started to decorate his gulag quarters with flowers, with his resolution of acquiring skills and proficiency of flower arrangement if he ever went back home alive. His reflection - a few flowers casually placed and bound together like human couples, husband and wife, the minimum unit of our lives. Flowers arranged do help and support together each other like a family. Beauty of life and strength to live, this he learned from flower arrangement.

A long overdue story appeared recently in the Nikkei Newspaper. A nonagenarian named Michio Kashiwara, was hailed as a brown bread master in Tokushima farming village. His brown bread making expertise was acquired during his Siberian prison life of four years. After having engaged in the harsh Baikal-Amur (BAM) Railroad construction works, he was assigned to a brown bread factory in a small town called Novy Urgal, 350 km northwest of Khabarovsk, Siberia. He improved the baking process, speeding up fermentation, quadrupling daily bread production. The plant manager personally thanked Kashiwara for his contribution on the “damoy” day he had long waited.

Back in Naruto, Tokushima started to sow wheat in vacant lands, baking brown bread upon harvesting, delivering to city schools for lunch. Brown bread is nutritious, as it uses unpolished flours, including embryo and cuticles. Naruto, known as a German internment town, is now as popular as the Russian brown bread town.

Posted by riodan at 3:47 PM No comments: