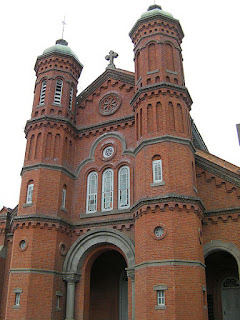 Edson Aoki, a Japanese Brazilian, whom I just got to know, visited Tachiarai**, Fukuoka recently. Tachiarai, easily reachable by train from Kurume (20 km further inland) or Fukuoka Tenjin Station, is a quiet rural country with rice paddies. We can't imagine what it looked like during World War II. Tachiarai back then was heavily bombed because the Imperial Army Air Force base was there. It was the training center of young pilots and AA artillery armies. I barely remember the odd name Tachiarai in the Kamikaze pilot song of my younger days, but I didn't know where it was located.

I read that in the early 1900s the Army looked for a suitable site for an airbase that met the following conditions: 1) was close to Korea and China; 2) was reasonably inland and impregnable from coast bombardment of enemy warships; 3) had no tall obstacles around to hinder flight activities; and 4) had few human habitations. Thus Tachiarai prospered for more than half of a century as military capital.

I read also that returnees from China and Korea right after the war were mass allotted there to turn airbases back to rice paddies. The story was that they worked hard sweating and with blisters. The hard asphalted airstrips remained in town as main roads.

Edson's visit, however, had nothing to do with the penitence of the war. He told me he visited "Imamura Church" in Tachiarai, showing me a colorful pamphlet. "Do you know Imamura Church, Imamura-san" was his first question to me. Imamura, in this case, is not a surname but the name of the village inside Tachiarai.

"No, I don't! Any particular reason for the visit?" I asked him.

"My ancestors were from Taichiarai. "

I remembered again that many Fukuokans immigrated overseas to Hawaii, the U.S. mainland, Canada, Mexico, Peru, Brazil, Argentine, etc. ever since the early 1900s**, and quite a few were from the Yabe River area, the branch river of Chikugo River further inland. Fred Nabeta, father of my San Diego friend Joyce was from Kuroki, along Yabe River. Father of Senator Daniel Inoue, Hawaii was from Yame, also along Yabe River. George Ariyoshi, ex-Governor, Hawaii has his father born in Buzen. Antonio Ueno, President of Parana State Chamber of Commerce had parents from Fukuoka. Marcia Uematsu, currently a court judge in Sao Paulo is a 3rd generation Nisei who graduated from Kyushu University with her law degree. Yes, Brazil boasts 2 million Japanese Nisei population.

According to the brochure Edson showed me, there were quite a few Christians in Imamura in the late 1500s, influenced by the Christian Lord Sorin Otomo. But after 1638, when Tokugawa had a bitter experience suppressing the Christian's Revolt at the Shimabara Peninsula and subsequently closed the doors of the nation, Christians were expelled and punished. It was the beginning of hidden or crypt-Christians in Kyushu. Informers were awarded with prize money. Joanne Hirata Mataemon, who was crucified on the cross by the Kurume Clan, was memorialized in the corner of the Imamura Church. When the ban was withdrawn in 1853, about 200 from Imamura stepped forward as Christians.

Missionaries arrived and the construction plans were drawn under Rev. Honda. It was in 1913** when the red-brick church was completed by architect Yosuke Tetsukawa with donations from Europe, Germany in particular, and from the Imamurans who immigrated overseas in early Meiji period. Religious freedom and limited land acreage to share among the families were reasons for the exodus.

Today, I had a sudden revelation and visited Kitakyushu City Library to research Tachiarai Village books. Tachiarai and Kitakyushu are in the same prefecture.

I was quite thrilled to discover a couple of Imamurans who were active in Brazil as reported by Asahi Broadcasting (the book dated 1997). One was Rev. Aoki, who assisted Rev. Honda while in Imamura, the other Mr. Hirata, politician, probably descendent of the martyr Hirata. I understood now why Edson was so eager to visit the Imamaura Church.

Introducing again, Edson Aoki, is a researcher from the University of Twente, Enschede**, Netherlands visiting the Kitakyushu Institute of Technology during the month of April. He is a member of Twente Toastmasters (see photo) and he wanted to visit Kitakyushu Toastmasters as a courtesy call and exchange information while staying here in our city. Kitakyushu Toastmasters greatly enjoyed the company of this tri-national visitor. 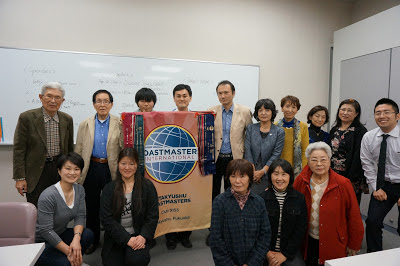 1) The name "Tachiarai" comes from the old fierce battleground Chikugo River in the Northern and Southern Courts Period (1336-1392), when the civil war spread nationwide. Kikuchi Clan, Kumamoto, siding with Southern Court, confronted with Isshiki and Shoni Clans, the Kyushu Commissioners of Northern Court of Muromachi Bakufu. The statue of Takemitsu Kikuchi, the brave lord warrior stands in Tachiarai River Park, as the site where he washed his sword blade after winning the battle.

4) Enschede, famous for Twente Canal, is a northern Netherlands city, close to the German-Nertherlands border, which is about 100 km north of Dusseldorf.

Posted by riodan at 1:32 PM No comments: