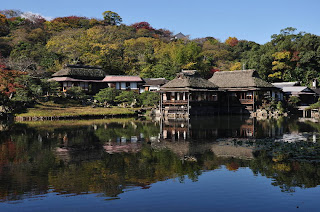 I left the hotel luncheon early to visit the Hikone Castle Museum, which was not included in the trip itinerary. I wish to touch upon two points of Hikone Castle from what I saw. One is Naosuke Ii's as a tea expert, and the other about the so-called Hikone Byobu (Folding Screen), the registered national treasure of art.

Naosuke, a man of tea, used Munemi (water of no root) first and Sokan later in Edo as his pseudonyms. He probably learned tea by watching his father and others during his boyhood and enthusiastically read available books on tea at random as he grew older. In his 20’s, he already wrote a couple of books on tea, including guidebooks for beginners and a history of tea, quoting and compiling anecdotes of tea masters such as as Rikyu Sen, Enshu Kobori, etc.

Along with Zen Buddhism, he found tea as the ultimate jewel and beauty for a samurai in pursuit of both swordsmanship and literature. Furthermore, upon being summoned by the Tokugawa Shogunate, he concluded the way of tea was compatible with the way of politics. His writings are found in the two most famous books: "Collection of Notes of One-Chance Tea Ceremony" and "Stories of Tea at Tranquil Night". Naosuke started writing in Hikone and continued in Edo. He had excellent penmanship.

Sen no Rikyu, the founder of Senke Tea School, taught that both host and guest be so disciplined to practice "one encounter, one chance" , the core value of Chado and Budo (ways of tea and swordsmanship). Naosuke quoted Rikyu's core word "one chance" on his book title. There aren't any do-overs or Mulligan shot, as in the game of golf. Always seek perfection. It's a life and death matter as in combat. Naosuke devised a new word "Yojo Zanshin", mediate awhile and when the ceremony is over, deeply reflect on the experience. Honesty, Harmony and Tranquility are the three creeds he sought to produce, denying formalism as well as denying the use of rare and fancy tea utensils.

In Edo he contacted Tokugawa's tea master Soen Katagiri of Sekishu School, known for "Teas for Samurais" and exchanged views regarding the tea ceremony. "The Questions and Answers exchanged with Tea Master Soen" was soon published. Some people called Naosuke a New Sekishu school, but it seemed that Naosuke wanted to create a new school of his own in due time. The recorded numbers of Naosuke's tea ceremonies are 50 as host and 200 as guest; venue-wise, 70 in Hikone and 180 in Edo.

The museum exhibits had many tea items: books, scrolls, utensils, and in particular, numerous hand-made incense containers made by Naosuke himself, of various shapes, insects, pine cones, etc. He gave them as gifts to friends.

Omi is an old name of Shiga Prefecture with Lake Biwa in the central position. The word derives from 1) fresh water and 2) the inlet near Kyoto, the capital. Kyoto depended on most of its food coming from the fertile Omi land and fish from Lake Biwa via seaway. The name Omi prevalently used includes Omi-Merchant, Omi-S(Z)ushi, Omi-Onna, etc. Omi-Merchants are famous for their business creed and philosophy of three way excellence, "aim business to satisfy seller, buyer and society". Today, Omi-Onna (woman) is a Noh-mask of matured woman. The mask bears compassion of the commoner woman, with down-turned eyes, used in such Noh plays as famous "Dojoji-temple", "Autumn Foliage Excursion", etc. 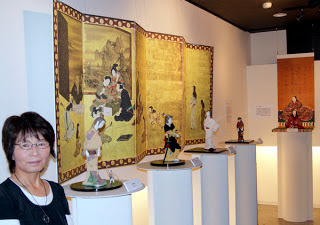 On this trip, I found another one - "Omi-Byobu". Probably this one might have been as equally popular as the above mentioned Omi-stuff. I just wasn't aware of all this. Omi-Byobu is a gilded folding screen with 6 panels, height 94.5cm (37.2 inches) width 278.8cm (110 inches). It's a registered national treasure, so the exhibit is displayed for limited amount of time every year during the golden week in early May. I was unable to see it the day I visited but I saw a replica, photos, and related exhibits such as individual dolls from the screen, postage stamps, trays, platters and metal containers with inscribed figures of the arts.

The screen was successively owned by the Iis, until the Hikone Municipal Office became the new owner. Naoyoshi Ii, great grandson of Naosuke, who served as Hikone Mayor, died in 1993. The Ii family, unable to pay Naoyoshi's inheritance tax, opted to sell the screen. The municipal Government, with the help of benefactors, acquired and restored it extensively for the 400th year anniversary of Hikone Castle.

The screen depicts 1) Kyoto street scenes - a young samurai reclining with his sword as a squire flirts with three girls who are passing, one of them walking with a dog, 2) Joyful quarter indoor scenes - letter-writing woman, a dictating couple, and a kneeling waitress. 3) Noisier groups of three-string Shamisen players (one of them is a priest), three backgammon players over the board and an observing waitress, all in front of a Chinese mountain art screen.

Hikone Byobu has a somewhat a darker sensual side in the Edo period and many people tried to decipher the mysterious story narrated by an anonymous artist.

There's one theory that provoked my interest. This person (deceased) noticed green leaves of plantain as the dress motif of a girl whose long hair hangs freshly washed and she claims she is the spirit of plantain, from the Noh play "Plantain". One of the proofs, according to the claimant, is that the Chinese Screen therein has the famous Lake Dongting scenes in the present-day Hunan Province, China, the imaginary venue of the Noh "Plantain". In the play "Plantain", the spirit of plantain, disguised as a woman, haunts the mountain village allured by mantras chanted by priest. Seemingly an interesting opinion, but how to explain all the other figures on the screen? Incidentally, I learned later that the disguised woman uses the "Omi-Onna" Noh mask.