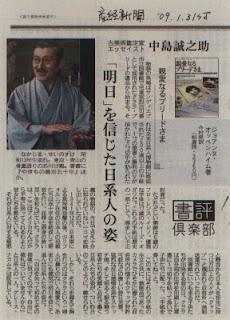 Art historian / essayist Seinosuke Nakajima reviewed the book Dear Miss Breed (written by Joanne Oppenheim, translated by Rio Imamura, published by Kashiwashobo) for the January 31, 2009 Book Review Club column of the Sankei Newspaper of Tokyo. Below is my translation of the article.

The story begins with the discovery of letters and mementos bequeathed by Clara Breed, a librarian hired in charge of children by the City Library of San Diego. There were over 200 letters eventually donated to the National Museum of Japanese Americans in Los Angeles, including one-cent postcards and envelopes with three-cents V (for victory) stamps.

There was a letter written by 6-year old Florence Ishino in tottering alphabet or another written by 17-year old Louise Ogawa in a refined, elegant style. They were living proof of sad and unfortunate injustices, a part of American history, almost buried and out of sight for half a century. It is bygone history, yet still remembered.

When World War II broke out with the Pearl Harbor attack by the Imperial Japanese army, the Japanese American mothers living in California immediately organized Red Cross activities, blood drives, bandage service, war bond drives, etc. in their effort to alleviate their shame, infamies and awkwardness. Clara Breed comforted them saying this is America where everyone is treated equally with no bias.

Things did not turn out as she predicted. Suspicions and hatred prevailed. Japanese Americans were treated no different from the despicable enemy “Japs”. Everyone who had Japanese ancestry was sent the President Executive Order to go to internment camps, away from their homes in California. That number reached 120,000 in total.

The day before the evacuation, Clara distributed self-addressed cards hurriedly printed with one-cent stamps on them to children she knew and asked them “be sure to write back.” She told them, “I will send you books.”

The book Dear Miss Breed, along with the children's letters, shows rare photos taken inside internment camps by cameras that were officially forbidden. Also shown were harsh hate illustrations and cartoons such as “Jap” hunting licenses, deformed buck teeth and slanted-eye caricatures of Japanese. These images contrasted sharply with images of smiling children, despite their adversity, acting brave and bright and young men working hard in farms and camps.

What struck us most is the touching humanity and boundless love of a woman named Clara and the young Japanese Americans who heroically walked their life believing in their futures.

The testimony of Grace Nakamura deftly expressed the feeling: “Until you lose your freedom, you do not realize how dear it is. There is no price tag for freedom.”

Seinosuke Nakajima was born in 1938 and is known as the Godfather of the Aoyama curio shop street in Tokyo. He authored “50 years as Pottery Critic”.
Posted by riodan at 10:28 AM No comments:

I thought it strange that no one claimed any connection with General Shinseki, appointed as VA Secretary by President Obama, in Hiroshima since it is the General's grandparents native home. My friend in Hiroshima dispelled my doubt recently by sending me an article in the local paper Chugoku Shinbun dated January 22, 2009 about General's second cousin who lives in Kaita-cho, between Hiroshima and Higashi (eastern) Hiroshima. Kaita is a town of about 30,000, still claiming its autonomy, sandwiched between two mega cities. Mikinosuke Ota, a gold medalist of 1928 Olympics triple jump event at Amsterdam was from this town. This I remember because I knew his niece personally. She was very proud of her athlete uncle.

Back to General Shinseki's second cousin. His name is Giichi Neishi, 73 years old, serving as President for a NPO medical organization. The Chugoku Shinbun article shows Giichi Neishi holding his family album. He said he met Eric Shinseki just once, about 35 years ago and he thinks General Shinseki has not been in Hiroshima.

An elder brother of Mr. Neishi's grandfather named Gisaburo Ishii immigrated to Hawaii also and his daughter is married to Shinseki's father. David Ishii, a popular Hawaiian pro-golfer, came from the Ishii family. I guess Neishi, Shinseki and Ishii are all second cousins. As a golfer myself, I know David Ishii, who won two major tournaments, 1982 Kapalua Open and 1990 Hawaiian Open. He toured in Japan and was a winner of several tournaments. I saw the name of DSIF Invitations and it is for junior champ competition under the David Ishii's Foundation.

Along with the Neishi article, the Chugoku Shinbun reported that Hiroshima citizens involved in Peace and Anti-Nuclear Movements are all thrilled with the inauguration of President Obama. They believe he will support the ban on future use of all nuclear weapons allowing voices of many people to be heard, including those of Mayor Akiba, Japan Council representative Against A/H Bombs Victims Organization and docent of the Peace Memorial Museum. All are looking forward to an early visit of President Obama to Hiroshima.
Posted by riodan at 2:43 AM No comments: