The Return of General Shinseki

In the early 1960s, I took my family to visit the U.S. Merchant Marine Academy in Great Neck and the U.S. Military Academy in West Point. I was stationed in New York then as part of my job assignment. My son was in kindergarten and he liked to watch the Sunday parades of cadets. We visited Great Neck at the invitation of my former American colleague to visit with his family as his son had just enrolled in the Merchant Marine Academy. We learned that a cadet is given the privilege to head a parade whenever the academy is informed that his or her parents are visiting. My colleague was proud of introducing his son at the very front. As to West Point, I belonged to the postbellum generation greatly influenced by General Douglas MacArthur and I wanted to pay a courtesy visit to his alma mater near Bear Mountain by the Hudson River. A young Eric Shinseki may have been among the cadets who paraded for us. According to demographic information for both West Point and Annapolis, Asian Americans, as well as African Americans, make up 7-8% of the total enrolled there today.

First, I thought Shinseki is an Okinawan name but it turned out that it was not. After I found out that his grandfather immigrated from Hiroshima, I researched how many people with the surname Shinseki live in the Hiroshima area. The result was only four instances out of one million names. Digging further, I found nine in Osaka, two in Tottori, one each in Kyoto and Okayama, so I stopped and concluded that it is a rare name. His Kanji name meant "new fort" (could alternately be pronounced either Arazeki or Niizeki), which is a very suitable name for a soldier.

A news flash came on the symbolic Pearl Harbor Day last year. General Shinseki was nominated as Secretary of Veterans Affairs by then President elect Barak Obama, a thrilling news to Japanese Americans as well as the Japanese. As a returnee from the States myself, I wanted to learn more about the General. My Korean friend now living in Hawaii, who grew up in Okinawa and served in the U.S. Marine Corps, sent me a book in time for Christmas entitled My Name is ... Shinseki... and I am a Soldier written by Richard Halloran. Apparently this book is sold only at the Hawaii Army Museum. I finished reading it during New Year Holidays and found it very inspiring.

According to the book, Shinseki bravely fought at the Vietnam front lines and was injured, losing part of his leg from a land mine. While recuperating, he received a masters degree from Duke University in literature, which broadened his vision and horizons from Shakespeare to Fitzgerald. I imagine that he is familiar with Bushido or Hagakure, the guide for a Samurai Warrior, learning in particular three virtues of warriors: knowledge, humanity and courage. Of course, he must be familiar with Sun Tzu's The Art of War, as quoted above at the top of this article. He told the University of Georgia students shortly after his retirement that he comes from a country where nobody looks alike and most of them come to the U.S. with culture.

"Beware the 12-division strategy for a 10-division Army. Our soldiers and families bear the risk and the hardship of carrying a mission load that exceeds what force capabilities we can sustain. So we must alleviate risk and hardship by our willingness to resource the mission requirement." (From his retirement speech, June 11, 2003)

General Shinseki is known as a strong advocate and promoter of the Stryker concept - a vehicle more rugged than a vulnerable Humvee and less unwielding than a tank. He also supported black berets as a morale booster for the army. He was planning an army transformation into the 21st Century.

His love for his soldiers is well expressed in his saying: "I was rescued on a soldier's back more than once. You can't imagine how I embrace a feeling of affection toward them!"

His diversity and leadership as an Asian American had been admired by all men and women under his command.

"General Shinseki knows soldiers and knows what it takes to keep faith with the men and women who went forth to serve the nation."

"General Shinseki will be people-centric. It must be results-driven, and by necessity, it must be forward-looking."

As Army Chief of Staff, he challenged some of the Bush Administration's assumptions going into the Iraq War which led to confrontations with Secretary of Defense Donald Rumsfeld and his Deputy Paul Wolfowitz. General Shinseki's statement to Congress can be viewed on YouTube

He kept stoically silent since his retirement, turning down interview requests from 60 Minutes, Dateline, Atlantic's, James Fallows,...etc. However, I found out he made two speeches after his retirement. One was at the Asian American Journalists Association in San Diego on Aug 15, 2003 and the other was at the University of Georgia Chapel on April 5, 2004. The title of the 2004 speech was "From Autocracy to Democracy: the effort to establish market democracies in Iraq and Afghanistan." I tried hard to obtain either transcripts of the two speeches as a Toastmaster but was unable to do so.

I saw nothing but praise for General Shinseki, and we all believe he was one of Obama's best selection for an important post.

Now that the confirmation hearings for the Secretary of Veterans Affairs are progressing well and General Shinseki has started his own web site to share his views with his fans and followers, I'm hoping to be able to read more of his speeches and statements on the transformation of the VA structure into the 21st Century. Every pundit expects he will make changes swiftly and decisively. His second act is starting and will surely attract a lot of attention. It was reported that at the beginning of confirmation hearing he quipped, "F. Scott Fitzgerald said, 'There are no second acts in American lives.'" 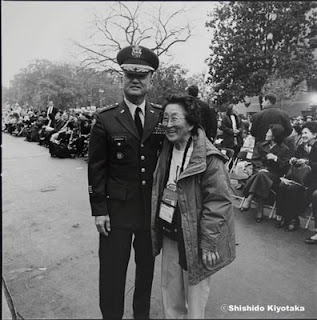 General Shinseki with his acquaintance at the dedication ceremony of the National Japanese American Memorial in Washington, D.C. in November 2000. Photographer Kiyotaka Shishido, who kindly gave permission for me to post this photo, lives in Sendai, Miyagi-ken, Japan. He won 29th Ina Nobuo Award in 2004.

Eric Ken Shinseki was born on November 28, 1942 in Lihue, Kauai, Hawaii so his age is 66. His family is Japanese-American.

He graduated from the United States Military Academy in 1965 with a Bachelor of Science degree and a commission as a second lieutenant. He earned a Master of Arts degree in English Literature from Duke University. He was also educated at the Armor Officer Advanced Course, the United States Army Command and General Staff College and the National War College.

Within a few months of his graduation in 1965 he was a second lieutenant on his way to Vietnam to serve as an artillery forward observer. On a second combat tour he commanded a tank squadron. During those Vietnam tours he was wounded three times - including losing part of his foot.

General Shinseki has held a number of commands including the 1st Cavalry Division, 3rd Infantry Division, Army Chief of Staff, Commanding General Seventh United States Army, Commander Allied Land Forces Central Europe, and Commander of NATO Stabilization Force in Bosnia-Herzegovina. He became the Army's 34th Chief of Staff in 1999 and at the end of his four-year term, he retired.

General Shinseki is the first Asian American in U.S. history to be a four-star general, and the first to lead one of the five U.S. military services. His years as active military were from 1965-2003.
Posted by riodan at 2:15 PM No comments: