The Manhattan Project and Oak Ridge 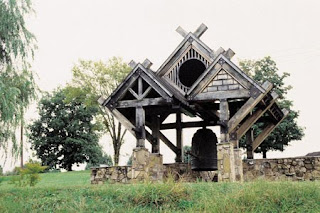 My favorite non-fiction author Bill Bryson, while trekking the Appalachian Trail (A Walk in the Woods, 2007) from Georgia to Tennessee with his pal, hit on the idea to hop over to Virginia's Blue Ridge mountains. He rented a car in Knoxville and drove to Gatlinburg, the main entrance to the Great Smoky Mountain National Park. They could not just skip the Trail of Tears that saw the exodus of the Cherokees.

Knoxville is the 3rd largest city of Tennessee and the home of TVA Headquarters to where the Manhattan Project was lured. Oak Ridge, nicknamed "Secret City" during WWII, is just half an hour drive from Knoxville. It went from empty woods in l941 to a city of 70,000 in 1945. On a snowy March in the 1980s, I hurried onto Interstate 40 to Asheville, North Carolina, and I'm sure I was driving very close to Oak Ridge. Recently I found one of my friends living in Oak Ridge. I obtained information and photos* from this friend to update my knowledge and curiosity about the famous Oak Ridge National Laboratory (ORNL), now operating under the Department of Energy (DOE).

Originally called the Manhattan Engineer District of the U.S. Army Corps of Engineers, it became known later, as the "Manhattan Project"; formed in 1939 by President Franklin Roosevelt who was alerted by exiled German scientists headed by Nobel Prize Winner Albert Einstein that Nazi Germany had started studies on a new bomb using uranium, secured at an uranium mine in German occupied Czech.

President Roosevelt, not so impressed at first, agreed to embark on the project and named General Leslie Groves (1896-1970) as Military Director and the eminent Berkeley physicist J. Robert Oppenheimer (1904-1967) as Scientific Director. Please note this formation precedes Pearl Harbor and Japan was doomed to an atomic attack before its declaration of war. Nazi Germany was intended to be the target, but the bombing of Pearl Harbor changed all that. President Truman, who succeeded President Roosevelt, knew he had to justify the huge expenditure of 2 billion dollars.

The facilities in Oak Ridge were:

1) K-25 Gaseous Diffusion Process Building
U-shaped building measures half a mile by 1000 feet. (The original building covered more than 1500 acres and was described as the Empire State Building laid flat on its side. Must have been a gargantuan building! ) It housed the gaseous diffusion process, one of three isotope separations processes, that produced U235 for the Hiroshima Little Boy.

3) Y-12 Electromagnetic Separation Plant or Calutron Plant or Beta-3 Racetracks
Produced U235 for the Hiroshima bomb. Only surviving production-level electromagnetic isotope separation facility in the U.S. (Treasured silver - 6000 tons - was borrowed from Fort Knox for use in the fabrication of equipment as a copper substitute with less electrical resistance)

In the hidden outlying secret posts, thousands of class A scientists and engineers, including Nobel Prize winners, participated in the Manhattan Project under Oppenheimer who orchestrated open communication, stimulated exchange and debate of ideas, broke down barriers of compartmentalization, and solved many quandaries. These scientists were consciously or unconsciously aware that they were opening Pandora's box. I'm guessing that they were caught up in the excitement of the technological breakthrough or perhaps had the hubris syndrome.

I became aware that Pearl Buck (1892-1973) wrote a novel entitled Command the Morning in l959. Key scientists of the Manhattan Project all appear under fictitious names, traveling all over Berkeley, Chicago, Oak Ridge, New Mexico, Washington. The author added one young woman scientist, educated in India, among the group of bomb makers, and at a later stage, she desperately tries to block the bombing. One interesting scene was Dr. Burton Hall returning to New Mexico, then driving casually to Arizona to meet his Japanese American friend, Yasuo Matsugi, in the concentration camp. Yasuo is an artist who had been to Paris and came back to the U.S. when the war started. Dr. Hall is returning a courtesy visit to Yasuo who came to meet him prior to encampment. Yasuo showed a small heron wood sculpture made of a sage tree. Being asked why he wasn't painting, Yasuo replied he just did not feel like painting anymore. After the war, Yasuo settled in Chicago, met Burton there and accompanied him to Hiroshima and Nagasaki. "Command the Morning" derives from Job 38.12. The Lord questions Job: Have you ever given orders to the morning, or shown the dawn its place."

Both Germany and Japan lost the competitive edge in the war of technology. Records show that over 70 German engineers had built a reactor but were forced to engage in more pressing works as the war atmosphere grew tense. Japan's Army prototype reactor, built with a fewer number of engineers including Prof. Nishina from Universities of Tokyo and Tohoku, and in cooperation with Riken Laboratory, used a thermal diffusion method. It seems that high school students were mobilized to dig uranium ores in Fukushima. The Navy project, tied with Kyoto University, used a centrifugation method. The Navy solicited help from Germany in getting uranium dioxide. In March 1944, 560kg uranium dioxide was transported to Japan by No. 234 U-Boat but never reached Japan as it surrendered on the way and was captured by the U.S. The Imperial Navy and Army took two separate research paths and failed to share information with each other. No joint research efforts were made despite the limited number of scientists. Another bad example of the lack of cooperation between the two was the unshared technology of the Naval Fighter "Zero." It is well known that the U.S. secured uranium from the Congo.

*Now the following info is from my friend:

ORNL, originally known as Clinton Works after the nearby town of Clinton, played major roles in the Manhattan Project. It evolved into the DOE organization, addressing important national and global energy and environmental issues. Today, ORNL, working with the University of Tennessee (UT)-Battelle Memorial Institution, is opening the Spallation Neutron Source (SNS), the world's foremost facility for the study of materials. The venue covers 150 square miles (38,850 hectares) with a total staff of 3,800, including 1500 scientists and engineers. They are visited by 3000 guest researchers and 30,000 visitors each year.

2) K-25
Demolition is in progress. The hastily erected K-25 had been idle for so many years with little or no maintenance and had caved in roofs, unsafe floors and cracked columns. The entire K-25 is scheduled to be demolished by the end of 2011. DOE says it is one of the most complex decommissioning projects because of its size, the contamination from operations and structural problems. After the cleanup, the site will be the East Tennessee Technology Park, available for commercial enterprises set amid spacious green and wooded areas. Visitors at this time can take the Scenic Excursion Train (operated by Southern Appalachia Railway Museum) to the site.

4) Y-12
Eligible for Landmark status and being studied under the Integrated Facility Disposition Program (IFDP).

My friend sent me a photograph of peace bell installed in 1996 in the central city park called A. K. Bissel Park that commemorated the 50th anniversary of the city Oak Ridge. I thought maybe it was a gift from its Japanese sister city Hitachi Naka, but it was not. I'm amazed to find out that it took more than 20 years of arguing to have the bell accepted and dedicated in the "Atomic City" as a symbol of peace.

In 1972, the Federal Court of Greenville, NC endowed U.S. Citizenship to a group of Asian immigrants. Among them were Indiana University graduates Ram Uppuluri and Shigeko Yoshino. They got married and lived in Knoxville where Ram worked as a mathematician. 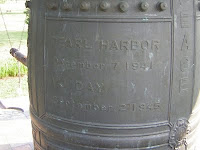 After the war and as the news of Hiroshima/Nagasaki tragedies came, Oak Ridge community was impatient to show its peace initiative. It reviewed a proposal by Sigeko Uppuluri, which introduced the bell concept. Some agreed but most opposed, reasoning the bell to be too much of a religious symbol. After some passage of time, however, the bell idea gained support and a funds were raised. The Uppuluris visited Japan with a bell design by artist Suzzane Harris. It was 1993 when the bell was cast in Kyoto by bell maker Sotetsu Iwazawa. 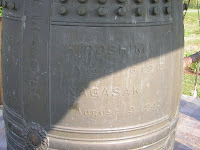 The bell cost approximately $100,000, even with the maker's concession. The sister city Hitachi-Naka and the Atomic Energy Society of Japan respectively contributed $14,000 and $23,000. The bell was transported by Honda Motors. Another objection arose on the erection of the bell pavilion in the public park and it took another three years until it was finally in place. The bell pavilion adopted the vernacular cantilevered barn structure found around the eastern Tennessee region. It was designed by Jon Coddington, a U-T professor. The city motto campaigned for the Peace Bell was "Born of War, Living the Peace, Growing through Science."

What's inscribed on the striker of the Friendship Bell per my friend is: 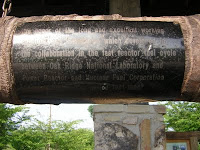 "In honor of the long and excellent working relations and friendship which developed in the collaboration in the first reactor fuel cycle between Oak Ridge National Laboratory and Power Reactor and Nuclear Fuel Corporation (scratched, cannot read) during the period 1981-1994."
- Anonymous

Oak Ridge is ranked No. l Best City to live in the medium sized city category. It is a haven now for retirees. Many elderly volunteers are working for such organizations as American Museum of Science & Energy" (AMSE), etc.
Posted by riodan at 1:35 PM No comments: