Hydrangea, Solace During The Rainy Season 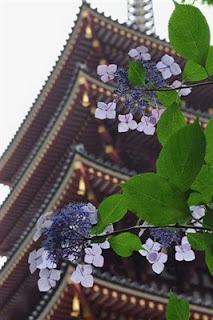 The languor of the rainy season is offset by the barrage of hydrangea in the neighborhood, the native plant of Japan. It is now adored worldwide with new fancy specimens created through crossbreeding.

I was a long time absentee house/landowner in Hino, Tokyo, because of my work assignment abroad. However, after returning to Japan, I have frequented, by bicycle, the Takahata City library where the local English book reading club members met twice a month, including exchange English professors at a nearby university. On my way to the library is the Takahata Fudo-son Temple, counted among Tokyo region’s three major temples dedicated to Fudo Myoo (Acala Vidyaraja). The temple contains a lot of cultural assets, some of which are designated as "Important Cultural Assets", including the five-story pagoda. I used to drop in to pray for my family, as the temple deity is a guardian of fire defense and traffic safety (see hydrangea by the Takahata Pagoda).

Many Temple festivals such as Bean Throwing and Dharma Marketing, the Hydrangea Festival attracts thousands of visitors from June to July, featuring 7,500 Ajisai flowers blooming peacefully under the rainy season sky. The English book reading club members often visited there, finishing the class early. We sometimes had bus trips to Kamakura to see hydrangea at Tookeiji, Myogetsuin, etc., known as the hydranga temples.

Regarding Japanese/Chinese characters of hydrangea, I found some controversial legends. One is Bai Juyi (772-846), the mid Tang Dynasty poet, who had influenced the Japanese, once sang this poem when he was stationed in Hang Zhou as an administrator.

"Since when and where this cute plant came
to this remote temple hermitage flower bed
Nobody could tell me and its name either.
So I am privileged to name you
Purple Sun-shining flower"

Some people say that the plant was brought by a Japanese Mission to Tang. Some people claim that the plant he saw was not the hydrangea, but the lilac. It was Minamotono Shitagou who wrongly interpreted and applied Bai Juyi’s naming to the Japanese Ajisai. There’s no photos or pictures to prove what Bai Juyi saw, so I say just let people believe what they believe. 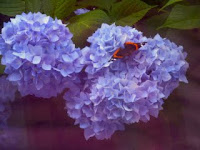 Bai Juyi’s poems are my favorite, particularly “Everlasting Sorrow", a longer narrative ballad he sang for Yang Guifei and the pond she loved.
I visited the pond in Xian a few years ago.

Another controversy is the hydrangea species named “Otaksa” by Dr. Phillip Franz von Siebolt(1796-1866) and rejected by Dr. Tomitaro Makino (1862-1957), father of Japanese botany. Otaksa by Siebolt was named after his mistress “Otaku-san”. Dr. Makino preferred the more conventional Hydrangea Macrophylla used by the famous Carl von Linne (1707-1778), father of modern taxonomy and founder of binominal nomenclature, and Carl Peter Thunberg(1743-1828), author of Flora Japonica. Thunberg (50 years ahead of Siebolt) and Siebolt visited secluded Japan through Nagasaki, both as doctors sent from the Dutch East India Company, and found hydrangea impressively strange and marvelous, changing into multi-colors. It is puzzling why we do not see paintings of hydrangeas by Cezanne or Renoir.

Morelia is a very well preserved colonial city and the capital of the state of Michoacan where the famous Monarch butterfly Mariposa Sanctuary had been established close to the State of Mexico, east of Morelia. The mountains there are covered with coniferous forests, mainly of pines and oaks, making a perfect place for the butterflies to live during winter. The monarch butterfly migration, which covers more than 3000 miles north, is an amazing feat. I know I was close to the Reserve but I headed west as my travel destinations were all to the west. I was told by my friend in Morelia that Monarch is the name of the Morelia football team.

About 50 kilometers southwest of Moleria is Lake Patzcuaro (1,000 square kilometers), where powerful Tarascan Indians settled and had rivaled the Azteca Indians. Tzintzuntan, the ancient capital, now a quiescent little village on the lake, boasts itself as the home of hummingbirds as well as the comic indigenous dancing "Danza de Los Viejitos," literally meaning dance of the old men, with masks and canes. This lake is Mexico’s highest lake. 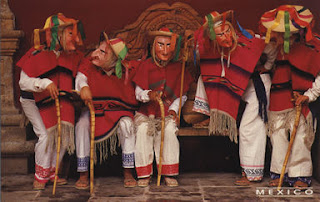 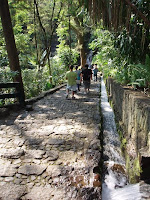 Another 50 kilometers southwest of Patzcuaro is Uruapan, the city I enjoyed the most on this second trip. Uruapan (pronounced ooh-ru-AH-pan), meaning "a river that sings," was founded by the Franciscans in the early days of Spanish exploration. It served as an administrative center for the area's sugar cane haciendas. In the late-20th century sugar cane dwindled in importance. Today, the avocado is king. So now, Uruapan is known as the avocado capital of Mexico. The coolest thing was the Parque Nacional Barranca de Cuptatizio, formerly (when I visited) Parque Nacional Eduardo Ruiz. In this serene park of 20 hectares (50 acres) with the tropical lushness, I spent a full day together watching the local children playing and splashing in the gushing water. At the northern tip of the park was the legendary fountain where a pool of clear water was burbling out, called "El Rodillo del Diablo," Devil's Knees. 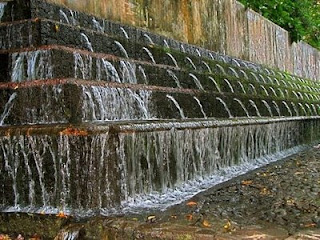 TAXCO
The night train left Uruapan with few passengers in the evening, arriving at Toluca in the morning fully packed with passengers and chickens in cages and all kinds of Mexican merchandise for the Toluca open air market. I changed trains going south to Taxco, a colonial silver mining town. I learned a lot about silver. "Real silver, defined as 0.925 pure, must be stamped on the item with the number 925." 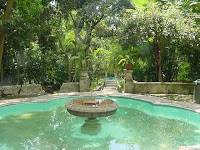 The Aztecs called it Cuauhnahuac, the edge of the forest; Spaniards called it Cow Horns for some reason. But Cuernavaca has been known for the famed eternal spring, thus an ideal weekend exodus for Mexico City residents. I had known Japanese florists there after WWII. Actually, Conqueror Cortez built his castle here, and Emperor Maximilian and Muralist Siquieros their second homes. I enjoyed a week stay here visiting historical buildings and gardens. The trees were all in bloom in various colors and with fragrance. Jardin Borda, built by the Silver Magnate Borda family, became the summer residence of Maximilian. I visited the garden twice, as it was a great place to relax. 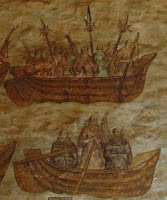 Close to Jardin Borda stands the Cathedral protected by large high-walls. The Templo de la Asuncion de Maria inside originally served as the church for a Franciscan monastery founded in 1526. It then became the Cathedral for Cuernavaca in 1891.

In 1959, when a crew was refurbishing the church, a fresco was found. The narrative fresco showed Missionary San Felipe de Jesus, originally from Mexico, martyred in Nagasaki together with 20 Japanese converts to Christianity by the order of Hideyoshi. I read the name "Taiko Hideyoshi" on the darkened Fresco and I couldn't believe my eyes.

TEPOZTLAN
About 25 kilometers northeast of Cuernavaca, Tepoztlan has the ex-Convent of Dominico de la Navidad as the UNESCO World Heritage building. It is a picturesque sleepy village, at the foot of spectacular El Tepozteco National Park (2,100 meters) and another retreat of Emperor Maximilian. "The climb to the top is just about an hour" I was told, but I had to quit near the top, as I was exhausted and breathless. Tepoztlan means "a copper axe above the hill." 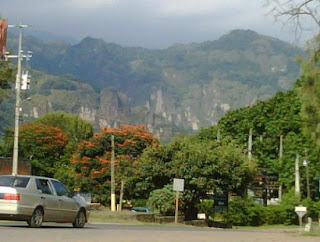 Posted by riodan at 2:15 PM No comments: 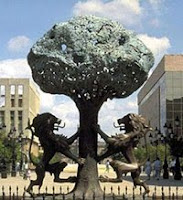 I split my trips to Central Mexico into two parts - l) Bajio area, relative lowlands and plains, known as the breadbasket country, including Leon, Guanajuato, San Miguel de Allende, Queretaro and, 2) primarily Michiocan State cities, such as Morelia, the state capital, Patzcuaro, Uruapan, then Taxco, Cuernavaca and Tepoztlan. I've been to Mexico City many times in my younger days. One time I stayed for over a month for trade shows in Chapultepec Park, Mexico City. I chose Guadalajara for the last city to visit on my first trip and Mexico City on the second trip, both times arriving back at the Tijuana International Airport, via the convenient U.S.-Mexico border cross-walk to San Diego, where I once lived. These trips were made after my retirement but before returning to Japan, almost 10 years ago. I want to record these adventures before my memories fade away.

LEON
As sister city of San Diego, Leon is a growing industrial city. I saw a GM plant near the airport. It's famous for leather goods, as the world's shoe center. I remember a striking municipal palace and a street arch with a bronze Lion atop, the proud symbol of Club Leon, the city's football team.

Guanajuato, nicknamed Kyoto of Mexico and designated UNESCO's World Heritage Zone, is the most beautiful city in Mexico. It is a former silver mining boom town that has transformed itself into a college town and living museum. I visited the university, recommended by my friend who taught English there. The birth place of Diego Rivera, one of a trio of great mural artists, is now a museum. I walked up to El Pipila for the panoramic view over the city and saw the monument of Hidalgo heroes who won the first victory of Mexican independence (1810). Unless accompanied by a guide, it is easy to get lost among the maze of serpentine alleys. Downtown, the car traffic goes underground, using tunnels that were dug for mining or diverted water ways.

SAN MIGUEL DE ALLENDE
San Miguel de Allende is a mini Santa Fe, New Mexico minus the snow. With the mild climate all year round, it is a charming colonial town, another Mecca for artists and writers, galleries, boutiques, art schools. San Miguel was founded in mid 1500’s and the name Allende was added in honor of the independence patriot born there. His statue riding on a horse stands in the Plaza Civica.

QUERETARO
Although less spectacular than Guanajuato in monumental and colonial buildings, Queretaro shines as a cradle of Mexican Independence and the site where the Constitution was signed and the city where Emperor Maximilian was executed. The city serves as a very important hub, being situated in the navel position of Mexico, 200 kilometers away from Mexico City.

The No. 2 megalopolis of Mexico, with impressive spacious plazas and squares in central Guadalajara, including the massive UNESCO World Heritage Cabanas Orphanage, now called "Institute Cultural Cabanas". Facing Cabanas stands a sculpture of the State of Jalisco's symbol of two bronze lions supporting a tree, the state coat of arms. Some Mexicans say that Jalisco is both the heart and soul of Mexico. Many things that are considered as typically Mexican, such as mariachi music, charreadas (rodeos), the Mexican Hat Dance, tequila, and the broad-rimmed sombrero hat, originated from this area, which had been the site of many civil wars and many battles in the past. In spite of these ongoing conflicts, the spirit of the people of Jalisco has endured. I saw many modern shopping malls. I also learned Guadalajara has the most competitive football team, called Chivas, the goats.
Posted by riodan at 1:23 AM No comments: