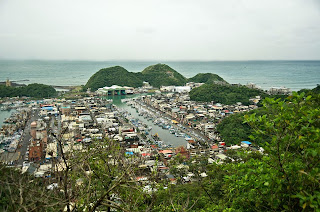 Okinawa is close to Taiwan. How close? Well, Naha and Jilong or Keelung are about 600 kilometers (400 miles) apart. However, Yonagunijima, the westernmost of the Yaegakijima islands is only 110 kilometers from Suao and Yilan County. I wrote a post three years ago about a team of six Japanese swimmers swam across the ocean to thank the Taiwan people for the generous donations to the 311 Japanese Tohoku Tsunami/Earthquake victims.

I found two wonderful stories, one each from Suao and Yilan, that I will post. The first story takes place in Suao.

In 1895, S. S. Sendai-Maru carried Japanese soldiers to Suao, including our protagonist Nobukage Takenaka (1862 - 1942), serving as a transportation captain. He, however, was in fact a civilian commissariat, sailing as soon as the Treaty of Shimonoseki was concluded between Qing and Japan.

Born in Wakayama, Nobukage succeeded the famous Daimyo Takenaka, comparable to Kuroda Clans; both clans had served Taiko Hideyoshi (1537-1598). Takenaka was in Manchuria first, but enlisted himself to disembark in Taiwan. In quenching his thirst upon disembarkation, he tried Suao water and was happily jolted. It was the carbonated water as per the rumors floating among the soldiers. He had to march on as the taste of Suao water lingered in his memory, along with scenery of great beaches and fishing port. 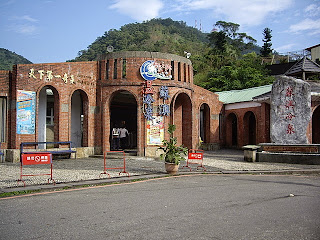 Nobukage must have found Taiwan the country of his destiny after traveling as a civilian roundsman and after relocating from Manchuria. He was 50 years old around the turn of the new century. He became the most well known Japanese settler in Taiwan, remarrying (lost his first wife) and inviting his kin from Japan. He chose to settle in Suao without hesitation and engaged himself in the carbonated water business.

It had ion values of 68 ppm carbonate, 14.3 ppm sodium, 10.7 ppm calcium respectively. The water originated from the foot of the nearby Qixingshan spring. In addition to help building the railroad, he also built a small research shop named “Takenaka Natural Carbonated Water Plant”, thus was called the Father and Developer of Suao Cold Spring. He knew about "Hiranosui", the water of Hirano in Hyogo, Japan, sold later as Mitsuya brand Soda. To compete, he worked out his production dispensing with tap water. “Natural” was his magic word.

His son Shuzo was born in 1904, during his trial and error period, which gave him unyielding courage to pursue his dream. 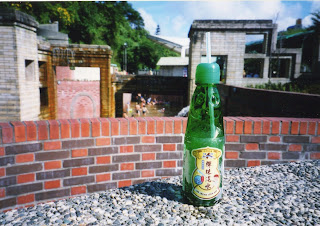 The year 1919, the plant sold 224,280 codd-necked bottles. In 1922, he succeeded in winning the Silver Prize at the Tokyo Industrial Products Fair.

Pending his happy retirement, Nobukage faced a major headache. His son Shuzo didn’t show any interest in succeeding his father’s profession and announced his engagement to a girl he was in love with. (Shuzo and Haruko were grade school classmates but lived very different lives until an accidental reunion in a Taipei Japanese bookstore. Haruko was looking for piano sheet music while Shuzo for Dostoevsky novels.) There were many family complications because Haruko was an Okinawan, often a victim of discrimination. It was Nobukage who gave in because he lost his second wife and his sisters left him to get married. Upon returning to Suao, Shuzo and Haruko gave him four grandchildren. But alas, he lost Shuzo in 1935. 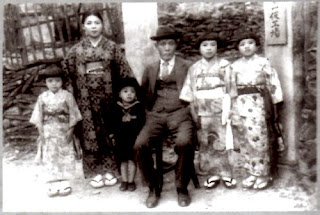 Please take a look at the photo of the surviving Takenaka family - Nobukage, Haruko and four grandchildren. Let me introduce Nobuko (Nakamura) and Mitsuko (Nishimura), second and third granddaughters of Nobukage. Nobukage passed away in 1942 and was buried in the Qixingshan hillside. In 1946, Haruko and her four children returned to Japan without any relatives to rely on. They settled in Moji, Kitakyushu, following an ex-soldier’s advice (who came to work at the Takenaka Plant after the V-J Day).

I’m glad to discover the family history of Mitsuko Nishimura, who is cofounder of the Kitakyushu Toastmasters. Attached please read 1) Mitsuko's speeh "My Message to 21st Century" (English) recorded at the Fukuoka Toastmasters 50th Anniversary (shown at the bottom of the post); and 2) Nobuko’s memoir (Japanese) of her mother Haruko, who struggled for the family's survival as the main breadwinner. I hardly read them without tears.

In 2002, the Suao municipal government celebrated the reopening of Suao Cold Spring Park with a stone monument, and invited relatives of Nobbukage Takenaka from Japan. Introduced as the main guest by Suao Town Mayor was Nobuko Takenaka (Nakamura), as the author of "Woman History in Japanese Colonial Periods - Meiji, Taisho and Showa” (in 4 volumes) - all translated into Taiwanese.

Nobuko was accompanied by Sachiko Nagano, daughter of Mitsuko Nishimura and others. Per Nobuko and Sachiko, red bricks used for the park were originally Takenaka's. A toast to Nobukage Takenaka and his family! 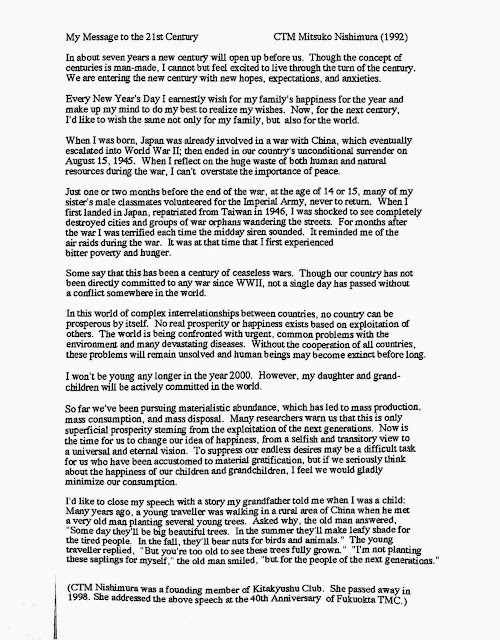