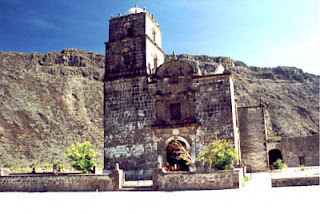 Starting in the mid-16th Century, European Colonialism and Christian Mission work had taken over exploring the New World consisting of the Americas and the Orient, including Japan. Missionaries, whether they were Franciscans, Dominicans, or Jesuits (the late-comers of all), were combative rather than sanctimonious in their proselytizing activities of Christianity.

I traveled extensively in Mexico after my retirement. Wherever I traveled, even in the remote fishing village of Baja California, I found a mission. I was impressed with the dedicated spiritual work of missionaries who learned the indigenous languages, fought atrocities and plagues, often met death before accomplishing their goals. I hear, on the other hand, negative reports of many priests. Seems they didn't fall under the same ink? Let's examine.

It was Jesuit Saint Francis Xavier (1506-1552) who traveled to Japan in 1549 via Africa and India, accompanied by Anjiro, his guide and interpreter, later known as Paulo de Santa Fe. Disappointed, however, as there was no headway gained after two years because of the dissensions throughout the country then. A priest sought China next, but died on his way. Xavier, who had baptized an estimated 30,000, was beautified in 1619 and canonized in 1622, respectively by Pope Paul V and Pope Gregory XV. He became a patron saint of the missionaries (see Rioslogger post).

Juan Maria de Salvatierra (1648-1717), another Jesuit born in Italy, was deeply involved in the success of Sonora and Sinaloa Missions. He lived in Chihuahua for 10 years, the land of the Tarahumaras. He was appointed 'visitor ambassador' of Sonora y Sinaloa Provinces. After being informed that all military expeditions to Baja California had been without success, he began a “spiritual conquest.” It's said that he landed in 1697 at Bahia Conception in a small boat with a handful of crew and soldiers and laid the foundation for Mission Nuestra Señora de Loreto, the first and what became the base of Baja California Missions.

As he did in Chihuahua, he mastered the indigenous language and in 7 years established 6 other missions along the coast. Close to 20 Missions were built by Jesuits after Salvatierra, but King Carlos III expelled all Jesuits from Espana Nueva. There was a couple of reasons quoted – first, "some missionaries amassed fortunes" and the other, Jesuits attempted to unseat the new king citing an illegitimate birthright. King Carlos III newly appointed Franciscan Father Junipero Serra instead to go to San Diego with Captain Portola, and later in 1772, sent Dominicans to replace Jesuits in Baja California. 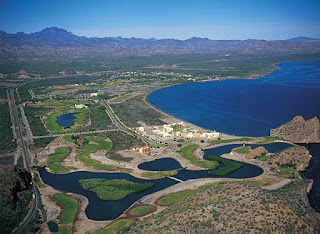 Traveling myself to Loreto, I found out that Franciscan Padre Junipero Serra departed there for San Diego via a sea route (according to his diary March to July 1769)) but Salvatierra was seldom mentioned. Salvatierra died in 1717, (well before the Jesuit expel order was issued) while traveling and compiling the History of Espana Nueva at the request of King Felipe V. I personally feel that he deserves to share the honorable title "apostle of California" with Father Junipero Serra.

Note:
A Jesuit Francisco Javier Clavijero (1731-1787), expelled in 1767 by King Charles III, relocated to Italy and became a scholar and historian. He wrote "Historia Antigua de Mexico", in which he praised works of Juan Maria Salvaierra, Eusebio Francisco Kino and other Jesuit missionaries.

Posted by riodan at 1:01 PM No comments:

Monterey and San Diego: A Comparison 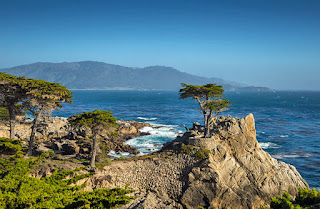 What are the commonalities between San Diego and Monterey? Both are popular California destinations today. Monterey has 'Del Monte’s' Pebble Beach, the 17 mile drive, and Carmel by the Sea. San Diego has the famous Torrey Pines, La Jolla Shores, Hotel Del Coronado and La Costa. Both had thrived once as fishing capitals: Monterey - Cannery Row and sardines; San Diego - tuna. Respective attractions for children are Monterey Bay Aquarium versus Sea World, Balboa Park and the world renowned San Diego Zoo.

Back in the 18th century, both attracted Spanish explorers, conquistadors and missionaries as ideal ports of calls. They enjoyed the scenic beauty, abundant wealth of sea life, and, in my humble view, “pine” and cypress trees, though the Spaniards, the voyagers, could not tell the difference.

They named the bay after their sponsor, the Count de Monte Rey and the point at the southern end of the bay, Point Pinos (la Punta de los Pinos). Monterey served as capital for Alta California under the Spanish and Mexican rule and was the only port allowed to trade on the west coast.

Portola, the Spanish captain, built the Presidio, the fort to guard a possible Russian attack from the north, while Father Junipero Serra celebrated Thanksgiving Mass. Father Serra built a small mission, but relocated it later to Carmel after Portola was replaced by Fage. Father Serra and his mission will be dealt with in a future blog. 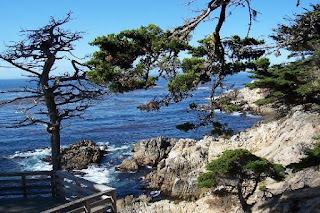 A few words on Monterey Pines - I found their cones are “serotinous”, i.e. they remain closed until opened by the heat of a forest fire when the abundant seeds are then discharged to regenerate the burnt forest. The cones also burst open in extremely hot weather. I quote Frank Perry, Research Associate at Santa Cruz Museum of Natural History, “On very hot days (a rarity where I lived) the trees emitted an eerie cracking sound as some of the cones opened." (Click here for more information). Besides Monterey, Monterey Pines grow in San Mateo, San Luis Obispo, Santa Cruz, Guadalupe and Cedros Islands down south.

A few words also on the Presidio, taken over by the U.S. after the Mexican war - The Presidio remained a fort and as a U.S. infantry military facility. When World Ware II broke out and Pearl Harbor was attacked, the Army established an Intelligence School to teach the Japanese language to Nisei American soldiers, but in 1942 it was moved to Minnesota and renamed the Military Intelligence Service Language School (MISLS). The school produced 6000 wartime graduates.

Japanese imperial military codes were deciphered by the graduates. Today, the school moved back to Monterey and is renamed the Defense Language Institute West Coast branch under Washington DC Headquarters.

Posted by riodan at 1:57 PM No comments: