I never thought I'd be researching World War I prisoners sent from Qindao, China to Japan during that war to write a blog about Hungary. Because of the German alliance with Austria, and Hungary, these 4,700 prisoners from Qindao consisted of not only soldiers from these three nations, but also Czechs, Slovakians, Poles, Yugoslavians, some northern Italians and even Russians. Initially, they were divided into 16 camps throughout Japan, but were gradually consolidated to those from allied countries. Russians prisoners who falsified their nationality as Swedes working for the German Qindao were released earlier than the other prisoners.

The German Navy was trying to establish a naval base in the East in the late 1890’s as did the Russians when they secured Vlasdivostok. They thought Qindao would be an ideal location and saw an opportunity to colonize it when their missionaries sent there were killed by the Chinese.

Despite internal opposition, Japan honored a 1902 treaty with Britain and declared war on Imperial Germany in 1914. Japan sent troops to Qindao and a siege ensued culminating in an attack in October. The German troops surrendered a week later.

The German East-Asian Fleet had a fleet of ships such as the SMS Emden, Nurnberg, Leipzig, Kaiserin Elizabeth, Sharnhorst, Gneisenau. Most of them were light cruisers that patrolled the Pacific to guard the Marshall Islands, Samoa, etc. then under German control. The captured crews must have been sent to Japan as well, if they survived the sea battles and the Spanish flu.

After the end of the war, it was reported that 230 Austrian-Hungarian soldiers were being held in Aonogahara Camp near Ono in Hyogo Prefecture, along with about 250 German soldiers, and there were constant disputes between the two groups to justify their eventual separation. 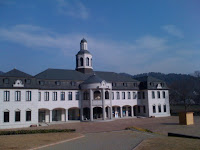 The German solders were sent to Bando Prisoner Camp in Naruto, Tokushima and to Matsuyama Camp. The Bando Camp became one of the largest of these camps with up to 1,000 prisoners of war. The camp also became famous as the site of the very first performance of Beethoven’s 9th Symphony "Ode an die Freude" in Japan, which was played and sung by a chorus of prisoners in 1918.

A movie was made in 2006 to show how camp life was under Lieutenant Colonel Matsue, a humanitarian who ran the camp. Matsue secured 2,300 square meters of land for the prisoners. The land became farms to raise vegetables and pigs, as well as a multi-purpose sporting complex with tennis courts, fields for soccer, schlagball, faustball and turnen training. The prisoners had matches with local school students, and demonstrated turnen to them. Some prisoners were experts in ham and sausage making. Others tried to build stone bridges for the village. They had active exchanges with local residents, performing musical concerts, Shakespearean plays and selling ham, breads and cakes, handmade crafts,… etc. The weekly paper "Die Baracke" (in German) was printed continuously for two years inside Bando camp.

When the camp closed around 1920, over 500 prisoners did not want to return to Europe, which was in chaos at the time. Approximately 150 left for Qindao, 250 for Indonesia, and 170 stayed in Japan. I was amazed that these reports were available from a research group made up of volunteers. 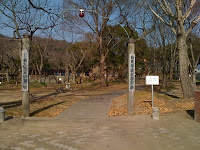 I visited the original Bando Camp recently, on the weekend of Decebmer 21, 2010 accompanied by my Tokushima friend M. Ogata, a returnee from Brazil and a business executive. Ogata-san invited his Naruto friend K. Hayashi who wrote the book “the Japanese Town where the Beethoven No. 9 played for the first time in Japan” (Heimat der 9 Sinfonie). To commemorate the German prisoners' activities, the first German House was opened in 1972. 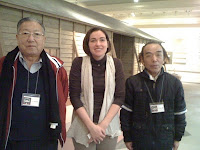 Young bo-trees or linden-trees donated by the Studientwerk für Deutsch-Japanischen Kulturaustausch in NRW (Nordrhein-Westfalen) e.V. grew deep roots here in the hills of German Village Park next to the cherry orchard, overlooking the lakes the prisoners reportedly swam in the summer. 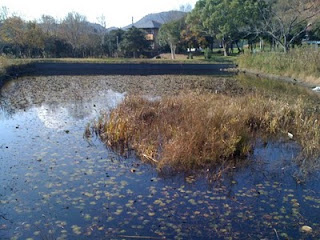 For more information:
Article about Bando POW Camp in Japan Times
Posted by riodan at 10:48 AM No comments: