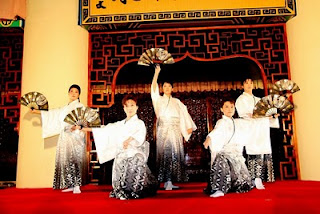 My recent trip to Taiwan yielded many harvests, adding more Toastmasters friends and contacting Yangmingshan National Park volunteer interpreters. I wrote that I joined the choir during the Toastmasters Conference Night. While I was waiting in the anteroom, I met a group of female sword dancers clad in men's "kendogi and hakama" (part of the Japanese fencing attire) with their sleeves braced up on the back. We rarely see them in Japan these days, so I was struck with the gallant outfits. One of them spoke excellent Japanese and I gathered she was a teacher or iemoto, sent from the headmaster of the dancing school. 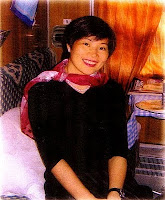 Her name is Janifer Kuo, a Taiwanese, President of the Japanese Toastmasters in Taipei called Taiheiyo, the Pacific. I was unable to see their performance on stage as our choir immediately followed them, but I saw the photographs after the show. After the Conference, Janifer sent us invitations to a special Chinese dinner, representing volunteers from a mix of two Japanese clubs, Pacific and Peace; noticing our short stay and probably with less than a week's notice to their members. About a dozen Toastmasters gathered for us, taking time out of their busy schedules. It was a wonderful meeting getting to know them on a more personal basis as self-introductions rolled around the table.

Janifer read selected lines of articles from a thick book entitled Journey Back Through Childhood Memories but it took me some time to recognize that it was the book she edited about 5 years ago for the reunion of Ximen Elementary School Japanese graduates on the 90th anniversary of the school being established. This school was founded in l915 as Kotobuki Elementary during the Japanese colonial days and since been renamed Ximen Elementary after World War II.

In 2005, Janifer, helped organize the welcome reception of the 40 graduates from Japan as a teacher at Ximen Elementary School. The highlight of the Anniversary was the tearful reunion of classmates, all reaching the age of three scores and ten, who had been separated between Japan and Taiwan. Some graduates had visited before, but for the majority of Japanese, this was their first return trip to their mother school. 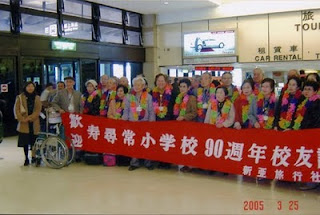 Standing on the school playground, they were reminiscing among the mangos, bread trees, ginkgo nut trees, as it was 60 years ago, and they were impressed, being told that the school did everything to revive the trees. They were particularly overjoyed to see the swimming pool. As the war came to a close, the money they saved for a school excursion to Japan was instead used to construct the swimming pool. The planned travel by ocean was canceled fearing Allied's submarine attacks. Janifer passed out writing pads (Japanese Genkoshi) to the 40 Japanese alumni to scribble down their thoughts while they made their nostalgic tours to Tanshui and Wurai and she was glad everyone complied with her request. She not only reproduced in the book the Genkoshi as written with photos of the writers, but she translated everything into Chinese, side by side. It was a wonderful memento for the Japanese alumni who so dearly remembered their childhood in Ximen.

She added historical school photos including those of the principal and faculty, school flags and songs, and even neighborhood news, including the symbolic Ximen Hong Lou story. Ximen Elementary School is just a couple of blocks away from Ximen Hong Lou. I salute Janifer for her passion and energy for bridging the distance of Ximen Elementary alumni living apart in Taiwan and Japan.

They agreed to target 2015 for the 100th Anniversary in Taiwan. However, they hold reunions whenever they get a chance. They have now adopted the club name "Evergreen” for themselves. They held a second reunion in 2008 in Taipei and a third one in 2009 in Tokyo with Janifer playing a major role.

The Japanese alumni, whenever heading for Taiwan, eagerly cooperated as virtual "carrier" with the so-called "Flying Wheels" program, numbering more than 100 to date. They agreed to fly to Taiwan used and retired wheelchairs, for the aged or physically challenged, which were donated by a Japanese non-profit organization. There, the chairs will be rebuilt or refurbished for reuse by Taiwanese in need. It was a friendly gesture by the Japanese alumni who served as good-will ambassadors to help the physically challenged in Taiwan.

Long live, Evergreeners, to celebrate their 100th Reunion!
Posted by riodan at 2:07 PM No comments: