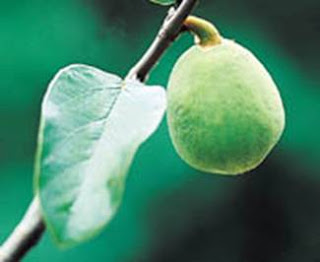 A jerry fig is a native tree of Taiwan found accidentally by a tea trader in the 1800s when he drank from a river near Chiayi. He found a clear yellowish jelly in the water he was drinking and was refreshed upon trying it. Examining the jelly, he noticed it was fruit hanging on vines that exuded a sticky gel when rubbed. He marketed it under his daughter's name Aiyu (pronounced o-gio in Taiwanese) successfully. Today, lemon aiyu jelly is loved by children and adults alike as their favorite summer refreshment. I heard there are aiyu jelly specialty shops in Tokyo. The problem is that preparation takes a lot time for a small profit margin.

I had a chance to try it in Taiwan and was interested in taking a look at the tree. I looked up Chiayi Toastmasters website to ask where I can see the tree. Bingo! The president of Chiayi Toastmasters was Dr. Lai, with the Chiayi Experiment Station, Governmental Agricultural Research Institute. He introduced me to Dr. Chung, an expert working on low land cultivation of the jerry fig. I learned that the jerry fig thrives in a misty highlands like Alishan, which requires plant breeding in the lower land and special farming preparations such as a watering networks, trelliswork, vining support, etc. I was looking forward to meeting Dr. Chung. So I sent email when I decided to join the Spring Toastmasters Conference in Taichung, he didn't respond. I contacted through my Taichung friend. I was told he retired last year.

An alternative advice came from Taichung Toastmasters friends. A new member joined them who was with the Taichung Experiment Station and he could drive me to a jerry fig farm. It was a case of wish fulfillment and I jumped on the opportunity.

The Taichung Experiment Station Complex in Wufen we dropped in on the way (about an hour drive from central Taichung through a new highway) has been the main headquarters of the Government Agrarian Research Institute since 1997, occupying 145 hectares (ha) including 17 ha building and 128 ha of experimental farms served by complete irrigation and drainage systems. 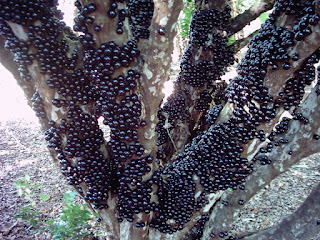 Unfortunately, the Puli farmer we visited no longer owned jerry fig farms any more. He took us, the disappointed guests, to a jerry fig farm in the neighborhood mountain. They are taller than I thought. The owner didn't go into detail, but I'm guessing he either sold it or changed all of his plant acreage from jerry fig to jabuticaba, a new lucrative business, grape tree native to Brazil for the following reasons: l) the fruit is new to Taiwan and has rarity value; 2) farmer receives possible Government subsidies; and 3) provides opportunity for sightseeing and on-site grape picking tours. He was excited to welcome tourists coming soon after us. He gave us fresh jabuticaba on trays. Tasted like grape, more viscous than regular grapes.

Edson Aoki, my Brazilian friend (see Imamura Church post) sent me info on Jabuticaba from the Netherlands. He wrote:

Jabuticaba is indeed a typical Brazilian fruit from the Atlantic rainforest, and hence is common in my state of São Paulo. I don't think jabuticaba is produced in a large scale, but it is commonly found in small farms and ranches, mostly for local consumption. ‘Jabuticaba’ is actually a word from Tupi (a Native Brazilian language) and it means ‘button fruits.’ But ‘Jabuti’ alone is also a word from Tupi, which means ‘tortoise.’

My jerry fig hunt caught jabuticaba instead! I met a smart farmer ahead of his time!

I searched books giving information on jabuticaba in the library. I found one "The Fruits Hunters - A Story of Nature, Adventure, Commerce and Obsession" (2008) by Adam Leith Gollner. Here is some information from the book:

1) Appearances are embryos of cosmonauts. Tastes, however, are fantastic, incomparable to any other fruits.

2) Jabuticabas grow on the trees like mushrooms. Children in Brazil sneak into the orchard of others to play "jabuticaba kiss", pluck jabuticaba by mouth, with sounds like puk, gooch, pooch.

3) At Hilo Airport, Hawaii, I pulled out souvenir jabuticabas from my pocket. As I gazed at them, these cubes I've never been aware of before seemed to veil unworldly riddles. I photographed them, one sharp focusing, the other blurred and hazy to have cubes melt in a geometric pattern. Jabuticaba promised hopes, endowing revelations which I have not experienced. Just holding jabuticabas in my hands, I felt miracles to descend, answering my prayers I'm humming without notice.

4) Brazilian photographer Silvestre Silva stopped endangered white jabuticaba from extinction after his 10 years of personal battles. It was in the suburbs of Guararema, the State of Sao Paulo. Soon the white jabuticaba will be cultivated and we will be able to see it.

Beautiful Mishimae inlet where I marked sheaves of growing water bamboos as mine.
Alas, I haven't time to crop up as yet! (#07-1348)
三島江の玉江のこもを標めしより己がとぞ思う いまだ刈らねど - 万葉集

She suggested Mishimae Inlet journey for water bamboos.
Hurray, she might have got the thing in me! (#11-2766)
三島江の入江のこもを刈りにこそ 吾をば君は思いたりけれ - 万葉集

You've probably heard about Hakka*1) and Hakka cuisine in Southern Asia, especially in Guangdon, Fujian, Taiwan, Singapore. They are Han Chinese, but speak Hakka Chinese, a subdivision language of Chinese. Taiwan Toastmasters have an independent Taiwanese Speech Contest in a variant of the Hakka language, resembling other variants of Hakka spoken in other parts of the world but differs vastly in terms of pronunciation. 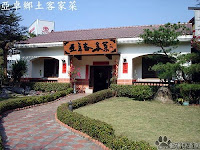 Hakka, "Keijia" in Mandarin, literally means guest families, whose ancestors immigrated out of China and settled wherever they are now. During my April trip to Puli, about 70 kilometers (45 miles) southwest of Taichung to see Jelly Fig farms *2) accompanied by my Taichung friends,I was treated at Ya-Zhou, one of the famous local Hakka restaurants, which was very close to the famous Puli Brewery *3), the sightseers' spot.

Chang Meili suggested that I order "Makomo", popular Puli produced water bamboo or water oats. The scientific name is zizania latifolia. Puli is known for the quality of its water, as is the capital of Taiwan, Shaosingjiu. 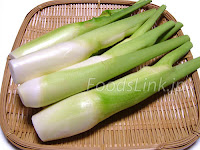 I was served half a dozen fat Makomo served on a bamboo basket. I enjoyed them, peeling green skins, eating a mouthful of white roots. I remembered that I picked up the unique city brochure (see photo) of Puli some years ago inviting long-term Japanese visitors to stay and savor water bamboo touting its healthy qualities.

Containing lots of water, water bamboo helps clean the bowels. It also contains calcium, Vitamin B, black lead and is good for diabetes, insomnia, gout and high blood pressure. Upon my return, I learned that Puli *5), produces close to 90% of Taiwan's water bamboos. No wonder they are so proud of it and hold a special festival to choose an expert to grow it annually. Puli promotes sales and export, including to Japan, with fancy names such as "beauty's rich thigh", "Sweet smelling beauty" *5).

Hakka dishes are excellent, added with the rural entertainment atmosphere of separating groups of guests by tables. I thanked my host Tonyo Tsai for this induction. He is a retiree from the Governmental Agricultural Experiment Station.

Japan had produced and is still producing "Makomo" or "Komokusa" since the olden days of Manyo, on occasions related mostly with divine affairs. Komono in Mie Prefecture, for instance, advertises its Makomo and Makomo tea sales. Komono seems to present its first crop to the "Ise Grand Shrine" annually as a Shinto ritual. It's also used in dishes prepared with medicinal herbs.

Komokusa grows 1.5 or 2 meters long, and the dried Komokusa is said to make huge straw festoons for Shinto shrines, such as the "Izumo Grand Shrine" in Shimane Prefecture.

Looking more into historical notes, I dug up two poems quoted above from Manyoshu, the Anthology of Myriad Leaves, compiled in mid 700C. Both poems, whose authors are unknown, refer to the water bamboos and to the same Mishimae River Inlet. Mishimae is an old name in the suburban area of Kyoto along the Yodo River, and amazingly, if you follow it downstream, you’ll reach southern Takatsuki City in Osaka, where I spent my college days. Back then, I crossed the Yodo River to Hirakata to see the famous Chrysanthemum Dolls Festival there in the mid 1950s. I rambled on foot along long dusty roads with my classmates. Mishimae, Tamae or Ichinoe are seemingly popular boat ride stops along the Yodo River. Makomo led me to these “golden” names of place, which we can only find in the 7th century Anthology (Manyo - shu) or Collection of Poems of Ancient and Modern Times (Kokin - shu).

2) Puli Jerry Fig Farm (Gaolin Jaboticaba Farm)
I saw the neighboring ferry fig farm surrounded by wire fences. The altitude is about 700-800 meters above sea level. The fig trees were quite tall, 4-5 meters. They barely had figs yet. Too early for the season.