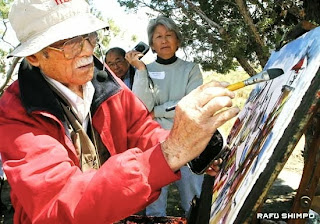 Shadow of the distant pass;
Their memories still last
Manzanar: Monument of Tears.
Ignorance and pseudo-fears;
A wrong that can't be made right;
A blindness for lack of sight;
A day now engulfed by night;
A hope shaded, once so bright.
The memories still last,
… they still last

The best souvenir of my recent Californian trip was an art book "Painted My Way", designed and printed in 2011 by the APC Fine Arts & Graphic Gallery, Torrance, California. Phyllis Doyon, who has her studio and gallery in Camarillo, gave it to me when my daughter Yukina and I visited her. Yukina saved the local newspaper report of the "Painted My Way" Exhibition in Thousand Oaks during the month of August. I flew into LAX on Sept 2, so, I missed the exhibition. Calling Phyllis, the exhibition organizer, Yukina found one of Phyllis' works from the Exhibition still being shown at the Thousand Oaks Community Gallery. We dropped in after our lunch outing. Phyllis drew a newly built mess hall, which I wasn't aware of, on my Manzanar visit five years ago. Yukina and I, with grandson Ray, drove to Camarillo to hear what Phyllis could tell us. 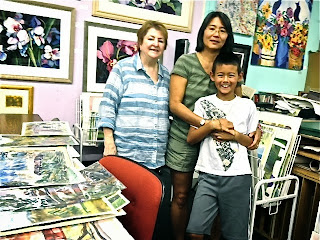 It was the first time I heard about Henry Fukuhara (1913-2010), a water color artist and teacher. Henry was an internee at the Manzanar Camp with his family from Los Angeles. They all left for Long Island, New York when World War II ended. They were engaged in a floral business there until late in the 1980s when Henry decided to move back to Santa Monica.

He was an art oriented person when he was young. As Henry made the pilgrimage back to Manzanar, he thought of leading an art workshop with a number of his artist friends, welcoming anyone who responded to his lofty ideal, Japanese Americans or not. He conducted the first workshop at the age of 85 and kept at it until he was physically unable to do so. He continued even when his eyesight deteriorated and fell half blind. Now Phyllis, one of the chaperons, told me the "Painted My Way" workshop survived Henry's death and the exhibitions continue. She introduced me to key artists who succeeded Henry.

Upon my return to Japan, I checked to see if I had missed Henry Fukuhara's name among the Japanese American artists introduced in the two great exhibitions of Japanese American artists I saw in Japan. One was the 1995 Summer Exhibition held in the Tokyo Metropolitan Garden Museum (event cosponsored by JANM, LA and Japan Association of Art Museums for the 50th End of War Commemoration, with a tremendous collection of over 200 artwork, including Chiura Obata, Yasuo Kuniyoshi, Dan Harada, Matsusaburo Hibi, Henry Sugimoto, and others.

The other was the most recent Smithsonian-sponsored "Art of Gaman" Exhibition held in succession at Tokyo, Sendai, Fukushima, Hiroshima, and Okinawa, since 2012. Arts and crafts items covered a wide variety of artifacts including tools, teapots, furniture, toys, games, pendants/pins, purses and ornaments.

When I found that Henry Fukuhara had not been introduced yet to Japan, I felt it my duty to let the Japanese see his powerful and inspirational work as shown in the book "Painted My Way". 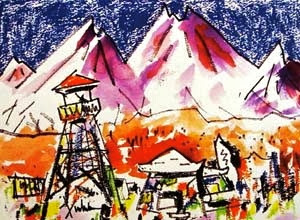 His Manzanar days of less than 5 years influenced him greatly almost like an obsession. I know another artist from the same generation, with a similar obsession in Yamaguchi-ken, a neighboring prefecture to Fukuoka where I now reside. His name is Yasuo Kazuki (1911-1974) and his obsession was Siberia. Yasuo wanted to become an artist like Henry, but he was drafted into the army and sent to Manchuria. At the end of the War, Russians sent him to Siberia for hard labor. His Siberian experience was 2 to 3 years, shorter than Henry's internment at Manzanar, but he lived there with death all around him. Upon his return to Yamaguchi, he began producing prolific artworks (his Siberian Series won the Grand Artist Prize of Japan) which were all requiems to his friends who died in the Siberia gulag.

Kazuki wrote all the dreams I had in Siberia were about my old home in Yamaguchi. But upon returning home, all I dreamed about were Siberian scenes - heavy snowfalls outside the window; poor prisoners all with drooped heads treading leaden feet back to the camp; horrible dreams of dread of receiving sentences of longer penal servitude.

Kazuki wrote also about the difference between an artisan and an artist. An artisan is a person who chooses art as his profession, whereas an artist is a person who chooses art as his way of life. He humbly admitted he had a dual life as an artisan and artist, although he tried to be artist. Henry Fukuhara inspired 80 to 100 artists and artisans in Manzanar each year. That's something only a real artist can do. He was never an artisan. I sincerely hope the Manzanar pilgrimage will continue on and on.