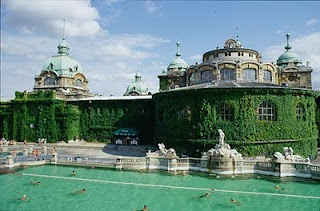 “According to a Colgate-Palmolive survey, Americans average about 11 minutes in the shower and spend about 20 minutes in a typical bath, hardly time for an in-depth cleaning. The Japanese, who take much longer baths, are certainly far more fastidious than the Americans. But Americans and Japanese are all barbarians by the standards of the Romans, who sweated, soaked and were rubbed, scrubbed and strigiled clean.” (Jay Stuller, quoted from Smithsonian Magazine 1991)

It was Romans who, in the first century, built the Aquincum in the current Budapest area. The Latin expression "aqua quinque" was the origin of the Aquincum, which means “five waters”. Budapest apparently followed a similar path as the British city Bath, but with much more turbulence because of frequent changes by occupants Romans, Turks, King Matthias Corvinus, Habsburgs, etc. Budapest had over 50 such facilities. Best known are Gellert, Lukacs, Rudas, Szechenyi, with the gorgeous buildings. I read that the geological features of the Carpathian Basin are such that the Earth’s crust is very thin, so water rises easily to the surface. It is not an exaggeration when one says that you could push a stick into the ground anywhere and up would come thermal water.

Hungary is a land of more than 1,000 hot springs and has enough spa facilities to accommodate 300,000 people at the same time. These spas are located in big cities, Eger, Gyor, Harkány Mako, and Szeged as well as smaller towns throughout the country. Even smaller places like Hévíz, Hajdúszoboszló, Bükkfürdö, and Zalakaros are the destination of not just European tourists but also the locals.

Lately, I was surprised to see a super modern resort hotel with a huge swimming pool, sauna and spa at Salt Hill Spawil at Egerszalok, northeastern Hungary, 80 kilometers from Budapest near the Slovakian border. A fancy ad is on the Internet written in Japanese. The wellness / fitness spa tourism seems to be booming in Hungary.

In Japan, there are about 3,000 hot springs and hotels and inns associated with them number over 20,000. However, bathing culture and customs are quite different between Hungary and Japan, so comparison is not easy. For instance, hot springs in Japan is not meant primarily for swimming. But, we certainly share the benefits of medicinal and healing properties the earth made available for us.
Posted by riodan at 6:32 AM No comments: 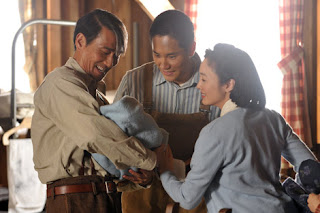 TBS, one of the prestigious TV broadcasters in Tokyo, plans a new program titled “Love of 99 Years – Japanese Americans” as its 60th year anniversary project, for a series of 5 consecutive nights, November 3 through November 7 at 9-10 PM. Based on Sugako Hashida's (1925 - ) screenplay, Katsuaki Setoguchi and Katsuo Fukuzawa are Producer and Director respectively. It is rumored that this is the last script by Sugako Hashida so she has done it with her heart and soul. The gorgeous cast includes Tsuyoshi Kusanagi, Yukie Nakama, Pinko Izumi, Keiko Kishi, Kaoru Yachigusa, Tsunehiko Kamijyo and others. 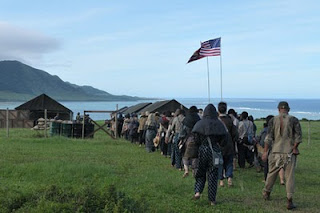 The story follows a family of Japanese immigrants who relocated to America 99 years ago. Kusanagi plays both the young Hiramatsu Chokichi (later taken over by Nakai) and his son, Ichiro. When the war breaks out, Japanese immigrants face racism and segregation. Chokichi is sent to prison, and all family members are sent to concentration camps. Ichiro pledges his alliance to America and gets sent to Europe. Second son Jiro stays back with Ichiro's beloved Shinobu (who he is in love with) and tries to protect his parent's farm. Their two sisters, Shizu and Sachie, are sent back to Japan and have to experience the horrors of war, one in Hiroshima, the atomic bomb, and the other in Okinawa, the bloodiest battleground of the Pacific.

It’s a great opportunity for all of us to reflect on what happened to Japanese Americans for the past 99 years, along with the great read of “Dear Miss Breed” book, where you find Miss Breed's affection, assurance and love for the captive Japanese children in concentration camps.
Posted by riodan at 9:20 AM 3 comments:

I need your help. I am reaching out to people to see if they know someone who could use a copy or two of the Japanese (i.e. translated) version of Dear Miss Breed by Joanne Oppenheim.

With great support from a few of my friends in California, I am starting a campaign to save the Japanese version of Dear Miss Breed from the shredders on October l that will run through October 31.

The company in Tokyo that published the translated book approached me, since I was the translator, to get me to agree to destroy the remaining inventory of the book. The initial print was 6,000 copies and after three years of sales, the book sold a little shy of 5,000.

Because book sales have slowed, they were concerned about the financial burden of carrying the inventory considering the publishers' cash flow and the interests and taxes that would continue to incur.

Regardless of what I think about the amount of marketing that was spent promoting the book, I understand their predicament. However, I am horrified at the thought of shredding all these books. When I mentioned the situation to my friends in the U.S., they came to the rescue by saying they would ask their friends who can read Japanese to purchase the books. I am deeply grateful to all who provided support and took action toward this campaign.

I tried to research what the norm was for Japanese book publishing. How many they print initially seems to be a big trade secret. The general practice has been to print a few thousand copies for unknown works, unless it was the latest from proven, well-known authors.

The book reviews that come out after publication often determine the amount of sales. The publisher will do a second print only when sales soar. I got the impression that five thousand copies was generally the first target. The next level up is 10,000. If the book sells over that amount, the project is deemed to be a real success.

I would appreciate it very much if you could help spread the word about this campaign. Attached is a copy of the advertisement that will run in the October 1st issue of San Diego YuYu newspaper. The book publisher is offering the book at a special discounted price during the month of October. Please click on the ad for a larger view.

Thank you very much for your kind support and help.