My Grandson, the Eagle Scout 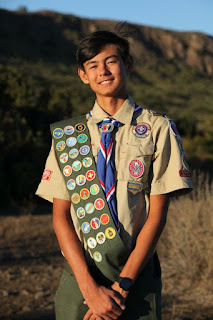 A proverb says “Grandchildren restore our zest for life, and our faith in humanity”. Tonight, I’m speaking of my grandson who, last month, celebrated 1) his 15th birthday, and 2) achieved the rank of Eagle Scout from the Boy Scouts of America, or BSA, headquartered in Irving, TX. His name is Raymond Warner, but he has the same name as his father, grandfather, and great grandfather, so we simply call him Ray 4. He proudly kept the Raymond family Eagle Scout tradition by becoming the third generation Raymond Warner to become an Eagle Scout. The first Raymond Warner was just a little too old when BSA was established in the United States in 1912.

I fondly remember Ray Jr., who passed away two years ago last May. He was a veteran B-25 navigator-bombardier during WW2, and with the GI bill, graduated from Carnegie Tech University in Pittsburgh. Since meeting him at my daughter’s wedding, we became good friends and his close kin, sharing our mutual grandchildren.

Ray 4 is over 6 feet tall, so he must be taller than any of us here in this room. I haven't seen him since he was in the 3rd grade, when he was 8 years old. I’m sure his voice has changed, I hope to hear his low and sonorous tone overlooking me when we meet next spring on his school excursion to Japan. 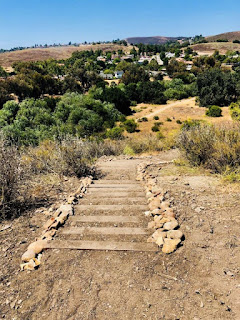 Ray joined the Cub Scouts when he was 7, then seamlessly joined the Boy Scouts, where he climbed up the ranks from Tenderfoot, Second and First Class, Star and Life, then finally completing Eagle before his 15th Birthday. This is quite an achievement, as only 4 % of boys ever finish Eagle Scout, and where he lives, boys typically finish just before their 18th birthday. Raymond had to complete 21 merit badges on such topics as citizenship, camping, first aid and cooking, as well as activities like rock climbing, metal work, and rifle shooting. He has actually completed 28 merit badges, which qualified him to earn a bronze palm that he can wear on his Eagle Medal. One of the major requirements to complete the rank of Eagle is to plan and lead a significant service project. Raymond’s project involved over 30 people working more than 200 labor hours to build two steep staircases in the side of a hill at a brand-new local community park called Sapwi. The park now has more than 5 miles of hiking trails used by Ray 4’s high school cross country team, a bike course, a tournament level disc golf course and playground. The park opened at the end of September.

Ray 4 had to show, in all assignments, initiative, discipline, leadership and communications ability from planning to execution. He really pushed hard on this project to make it happen. I feel that this system is similar to what we do at Toastmasters. For your information, the Scout Law reads A Scout is Trustworthy, Loyal, Helpful, Friendly, Courteous, Kind, Obedient, Cheerful, Thrifty, Brave, Clean and Reverent. These are universal values and I’m all for them. Scouting can be found in over 100 countries, including Japan which had 100,000 members in 2017. USA BSA alone amass 6 million members. I’m proud to share with you my grandson’s Scouting achievements. I look forward to telling you more about him in the future.

Posted by riodan at 8:55 PM No comments: 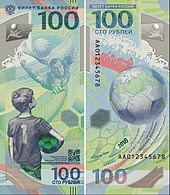 The 2018 Summer FIFA World Cup hosted by the Russians gained worldwide praise. Both Russia (Group A) and Japan (Group H) advanced to knockout stage, our mutual fairy tale expectations fueled up, eyes drawn to hot games at 12 modern Russian FIFA Stadiums, including Luzhiniki and Spartak in Moscow, Zenit Arena in Sankt Petersburg, Kazan, Kaliningrad, Sochi, etc. The results were not as good as Russia and Japan expected, but we surely enjoyed the thrill, passion, emotions and we have fallen in love with Russia, I’m sure. I’m glad that I found Zenit Arena Stadium completed in 2017; it was designed by the late Kisho Kurokawa, one of my favorite Japanese architects, the first sign a Japanese was involved with Sankt Petersburg infrastructure. Kisho passed away in 2007, so he didn’t see the completion of the project. Kurokawa built another FIFA class stadium – in Toyota City in 2001 in Aichi Pref and Oita City (2002) in Japan, a kind of sister stadium to Zenit Arena.

I refer to the Web site of “Transstroy”, the general contractor for the Zenit Area or Piterarea. It is stated there that "the idea of the stadium-attraction of global scale with maximum application of high technologies and progressive design is laid in the conceptual basis of the stadium laid by architect bureau Kisho Kurokawa Architect & Associates. We saved an innovative architectural concept and adopted it according to the last security requirements. " Please visit this site and enjoy the photo library and 3D-Tour.

The site has ticket information, as well as hotel recommendations – lots of information in English. Zenit Arena is located on the western tip of Krestovsky Island, north of Vasilyevsky, the biggest Island in Neva River, 7.5km away from the Palace Square. The nearest Metro Station is Krestovsky Ostrov on the purple line 5 which runs from the city center. Mind you, a little exercise awaits you. It is a 25-minute walk from the subway station through Maritime Victory Park, sport venues for tennis, polo, sailing, etc.

It was the summer of 2000, the turn of the century, when I visited Sankt Petersburg as a solo traveler. I depended on a Russian friend who speaks English, introduced by my Lithuania-born friend in San Diego. He agreed to the task but responded to me late. His entire family went to "datcha" near Moscow and returned to Sankt Petersburg just a couple of days before my arrival. Even in the worst case scenario, I didn’t mind spending my 10 days solely on the visit to the Hermitage Museum. However, to my big relief, I received confirmation close to my departure. He greeted me at the Pulkova Airport, gave me a complete “how-to-ride their Metro” (subway) guidance, showing me most of the famous sightseeing spots the day I arrived.  I was able to use the Metro with a few mishaps and without interpreters.  He took me one day to Peterhof, Peter’s Summer Palace & Garden, 25km west of Sankt Petersburg, with his friends. That was a truly great gift he gave me. The site has 1,500 acres and close to 200 water fountains.  It was a gorgeous garden!

I talked recently with a Japanese friend who claimed he had traveled to Sankt Petersburg over 10 times since 2005.  He said he visited Engllsh Toastmasters there and I couldn’t believe it.  He sent me the Web site to prove it.

He is promoting Russian Language Toastmasters in Saitama, Japan and I congratulated and wished him success.

Many Japanese corporations, particularly automobile manufacturers, Toyota, Nissan and Suzuki are in Shushary, Sankt Petersburg and thousands of Russians are employed there. Next should come what we call "a group clustering" of industries related to automobiles and the number of Japanese expats will increase.

Posted by riodan at 9:42 AM No comments: