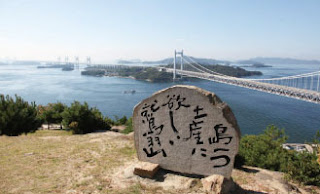 During the Edo Period, Kurashiki prospered as an area directly controlled by the Tokugawa Shogunate as a logistic center, using Takahashi River and the Seto Inland Sea transportation. Distinctive white-walled, black-tiled warehouses were built to store rice bales and other goods. Upon the Meiji Restoration, factories were built, including the Ohara Spinning Mill, which still stands as the nostalgic tourist attraction spot in Ivy Square. Known today as Kurabo, or Kuraray, the conglomerates diversified their operations worldwide.

I recently visited Kurashiki for a reunion with two old friends of mine who grew up in Kurashiki. Let me call one friend Kawa-San (resides in Kurashiki), and the other Tani-san (from Kyoto). They were classmates at both Kurashiki junior and senior high schools. I came to know the two separately through two different employers I worked for. Very rarely did I become well acquainted with anyone that I knew when I lived in Japan. I met Kawa-san in New York and Tani-san in San Diego. My name probably came up during their conversation and developed into a triangular friendship. Late last year, Kawa-san proposed a reunion. Tani-san and I seconded but it took time to set the date. It was this summer when all three of us finally agreed to meet on a weekend in September.

The reunion took place at a hotel lobby. After lengthy chatting and a luncheon, we strolled along the Kurashiki art arcade and visited Ohara Art Museum, the nations’ first authentic art museum built by Magosaburo Ohara (1880-1943), an entrepreneur and philanthropist. We spent the rest of the day there. I have visited Okayama (about 15 minute away by train from Kurashiki) often for Toastmasters events but It was my first time visiting Kurashiki and Ohara Museum and I was excited. 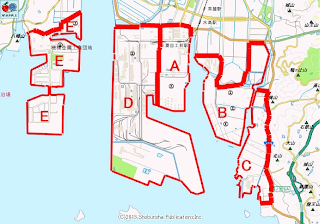 On day 2, Kawa-san drove us to Mizushima Bay Industrial Complex, formed by the intricate deltas at the mouth of Takahashi River, inclusive of the reclaimed as well as refilled lands connected by bridges, upon the merger of three cities, Kurashiki, Kojima and Tamashima in 1967. The designated area, I learned, is over 2,500 hectares, including a number of small mountains, occupying about 7% of the total area of new Kurashiki City. It is huge, equivalent to 400 Tokyo Domes inside. Kurashiki Minato Bridge, built in 2017, and State Highway 430, connects Kurashiki and Tamashima near the complex.

The complex is divided into five areas (see the complex chart above), named clockwise from A to E, where Mitsubishi Auto, which settled there before the war, is designated as A. B is centered around the East Mizushima Station, now turned into an exclusively container freight train station, with its nearby port facility. Area C or Kojima Shionasu area, is occupied by Sanoyasu (shipbuilder) at the tip. D is on the delta land reclamation area with a golf course on the south end. E is southern Tamashima District, that includes the land reclamation connected with the Harbor Bridge. The man-made island at E is the hope of the entire complex as the container terminal, where ships like tankers and bulk carriers can anchor alongside the wharf. There are 30 or more companies located at each of the five zones, nearly 200 companies in total that includes chemical, gas and oil, power, steel, autos and others coexisting together in the complex. There are companies straddling multiple zones - Mitsubishi Chemical over B and C, JXTG Energy A and C, and Mitsubishi Auto A, C and E. The production output is reported to be half of that of Okayama prefecture.

Kawa-san, supervises 100 people daily serving engineering and maintenance works for industries in the complex since his father’s days. He must be awfully busy.

To conclude day 2, all three of us sat together at noon at the Washuzan lookout point in Kojima to enjoy a panoramic view of the Seto Inland Sea and the entire span of the Seto Ohashi Bridge and pledged another reunion in the near future.

Posted by riodan at 1:50 PM No comments: 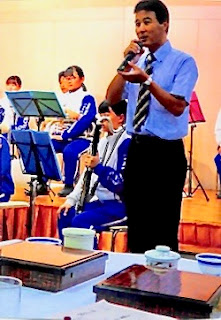 September brings another “Keiro Day” for the old folks. It was more than 10 years ago that I began receiving invitations from our neighborhood association to attend the luncheon, which includes heart-warming and entertaining events. My wife started to attend shortly after.

I unfortunately missed some events in my early 70s, due to some selfish conflicts of overseas traveling. But I no longer have such worries, and look forward to this annual meeting with our Einomaru neighbors. We are fortunate to have a nearby hotel ballroom that easily accommodates a couple of hundred guests, and a free shuttle bus to transport us.

I will definitely recall the Sunday, 15th of September, the first year of Reiwa, under the new Emperor Naruhito which started April l, 2019. The banquet opened with the proclamation by the President of the Association. The mayor’s message was read, and the board members and crew of volunteer hostesses were introduced with big applause. The toast then proceeded to a luncheon. Served inside the wooden lunch box were delicacies of all lands and seas, and a separate bowl of thick custard soup. Delicious! 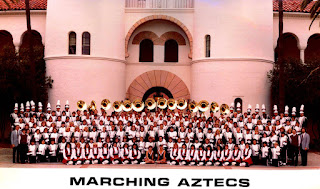 I had high expectations of listening again to the wind instrument band of the nearby “Hokuchiku Sr. High”. Yes, I had my wish come true and I nudged my wife’s elbow. Years ago, our daughter played clarinet in the SDSU Aztecs Band, a marching band with over three hundred members. As a matter of fact, she majored in music at San Diego State University in the US with a degree in music composition. I enjoyed many Aztec performances whenever they played at the SDSU football games. Occasionally, they played at special performances like when the San Diego Padres returned from the World Series (unfortunately Detroit Tigers won) and when President Ronald Reagan was running for reelection.

Hokuchiku Band is made up of only 50 members but filled up the small ballroom show stage. The music they played included:

The band played with young energy and passion. We sent them a storm of applause. Hokuchiku has recently won repeated Gold Medals at the annual Kyushu Senior High School Band Competitions. We are blessed with their high spirits and for their local community charitable contributions.