2015 marks the 70th Anniversary of the end of World War II, the year Imperial Japan surrendered unconditionally to the Allied Forces. The aging generation who survived the war consisted of children growing up during the war (1930 - 1945) wherever they were at the time - Japan proper, neighboring Korea, Taiwan and Manchuria. The children in Korea, Taiwan and Manchuria had to return to Japan, the land of their parents. We knew we had to live with a moral obligation to earn redemption on behalf of our parents in dealing with such close neighbors, but lost contact 70 years ago. 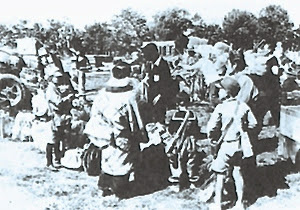 My wife was born in Nampo, North Korea, and her family, after a few years under Russian occupation, voluntarily attempted border crossing at the 38th parallel to reach Seoul and Pusan and boated down to Sasebo (See reunion photos of Nampo returnees, mostly from the second generation. They have a motto "Our home is where we meet".) My Fukuoka friend TM (Toastmaster) Oishi was born in Rason, formerly Rajin-Sonbong, northeastern tip of North Korea, bordering Vladiostok. He took the Jirin land route, China, and back to Dandong to cross the Yalu River. He re-entered in North Korea and headed south to Japan. TM Oshiumi residing in Wakamatsu, Kitakyushu was born in Daegu, South Korea. Both Oishi and Oshiumi told me they have attended Korean school reunions. I know they were both studying Korean Hangl. 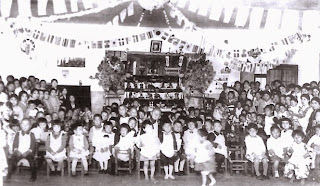 TM Mitsuko Nishimura, cofounder of Kitakyushu Toastmasters and her two sisters, born in Taiwan, were boated north from Keelung to Kagoshima. I read that Mitsuko tried to talk to local Japanese women farmers in Kagoshima but was baffled with an answer she couldn’t understand. This was the first of many reverse culture shock she experienced. It was the Kagoshima dialect! I remembered TM Oishi similarly was baffled with the Saga dialect.

My Kumamoto friend TM Uemura was born near Taichung. We traveled together to Taichung when we attended the Taiwan Toastmasters Conference. She took time to visit where she was born during the conference. I accompanied my Tokyo workmate Shimada to Taipei on his first-time return to Taipei where he was born. I introduced him to Taiwan Toastmaster Mrs. Quo who had taught at Ximen Elementary School. Shimada’s Nanmen school was close to Ximen Elementary. Mrs. Quo talked to the principal of Nanmen Elementary School and Shimada received a graduation certificate when he visited his mother school. I was very impressed with Mrs. Quo’s arrangements. 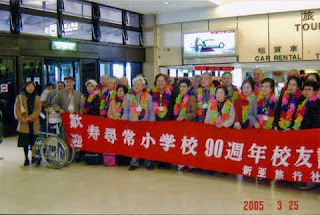 I found out that in 2002, Mrs. Quo organized a reunion of Ximen school classmates, Taiwanese and Japanese, to commemorate the 90th year since school opening and published an awesome book titled “Old Dreams-Deep Compassion” with collected essays from some of the participants. Now she is preparing a belated 100th reunion in March 2015.

The following is a quote from this book:

On board the repatriation boat - We were loaded into the vessel hold in a huddle, no free room to move and slept over rush-mat rug. Once out on the open ocean, the rolling of the vessel became intense and most passengers got seasick. They started vomiting and the bad smell filled the hold. They withdrew and grew lethargic, made no conversations and had lost their appetite. There were few semi-invalid passengers who died in such awful circumstances. Only those who could afford it went up to the deck and attended their burial at sea. The voyage took about a week. Upon disembarking, we all went through quarantine, being sprayed DDT from head to the sole of our feet. 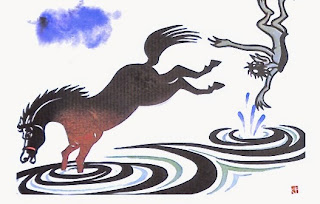 This story dates back to when humans were close to Kappa, mythical water creatures. It takes place in Koyanose, one of the Nagasaki Kaido Stations between Iizuka and Kurosaki. The mighty River Onga flows through Koyanose.

Children Kappa were hanging out at the river all day, bathing, and rollicking with each other. They particularly liked Sumo wrestling and would practice until the top of their saucer-like heads were almost dry and had to jump back into the water.

One day, a Kappa, imitating human children, pulled a hair from a horse tail for a fishing line. He approached the grazing horse from behind and the surprised horse kicked the Kappa with his hind leg.

"Ouch! It hurts!" He cried out in pain and his arm hung limp. An elder Kappa passing by examined the sobbing Kappa. The elder wrote a 'prescription' and told him to take it quickly to a human doctor. The prescription read:

“Half a snail shell, one whisker from a stray cat, two pieces of yam, and three seeds from a Mt. Hobashira cedar tree. Stir until all mixed together and apply it to the affected limb. Last but not least, make sure to place four cucumbers on top of head.”

Lo, the child Kappa was healed from his wounds. All Kappa kin flocked to visit the doctor, claiming it was an old remedy handed down from ancestors. The doctor prospered, and his patients exited the hospital with cucumbers placed on the top of their heads.

The following is why and how the English version of "Kitakyushu Folklore" was created. 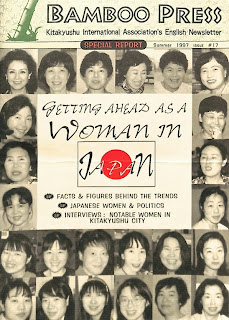 In the mid 1990s (just about the time I returned from the U.S. and relocated from Tokyo to Kitakyushu), the Newsletter Bamboo Press (now defunct, see photo) published quarterly issues edited by the Kitakyushu International Association (KIA), introduced translations of "Kitakyushu Folklore" stories, originally published by the "Kitakyushu Urban Association". Translators were successive editors, pairs of Japanese and Americans, including my friend Jesse Rude; I found them interesting and a boost to local pride and history. Upon discontinuation, I counted about a dozen stories, not enough material to warrant a book.

In 2013, Kitakyushu City celebrated its 50th anniversary. The city with a population of one million was established in 1963 by the equal-basis amalgamation of five cities: Moji, Kokura, Wakamatsu, Yahata and Tobata. Many celebrations participated in the celebration in cooperation with the Ministry of Foreign Affairs, UNIDO and OECD. Multiple events took place, such as the International Conference on Future of Cities, Promotion of Eco-Cities Network in South East Asia and Mayors Forum "Urban Green Growth in Dynamic Asia, along with citizen sporting events, a marathon and Nagasaki Kaido Walks. 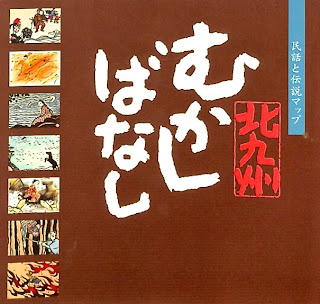 To commemorate the 15th anniversary, I proposed my Kitakyushu TMs to donate at least 10 translations of Kitakyushu folklore to match up with the dozen translations of the above Bamboo Press Newsletters and the proposal was accepted. The Kitakyushu TMs started working immediately, but finished late. It was March in 2014 that we submitted it in the form of a CD Master to Kitakyushu City Foundation for Promoting Arts and Culture, the NPO body, successor to the Kitakyushu Urban Association.

I felt responsible for Kitakyushu TMs who donated their time to translate. So, I tried my best to advertise the English version "Kitakyushu Folklore" my own way thinking it would be helpful for studying English at the elementary and junior high school levels. I selected three stories and presented each of them as a monologue "story-telling" at TM meetings. The stories were: 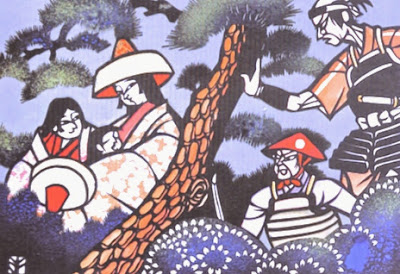 I favored Yakara-sama, the story of Heike refugees and Genji pursuers - a matter of life or death situation which transcends time. "Imagine that killers have invaded your neighborhood. They're in your house, and you and your neighbors are hiding in the cellar. Your baby starts to cry. If you had to press your hand over the baby’s face until the fighting stopped - if you had to smother the baby to save everyone else - would you do it?"

4. Some thoughts on Copyright

I know folklore would be hard to dispute copyright, because it is too old and is considered communal knowledge. But I have heard UNESCO WIPO pondering exceptions such as Peru's "Condor Passa." I believe Kitakyushu can claim Kitayushu Folklore copyright on the contemporary versions in both Japanese and English. However, it is my understanding that theatrical performance for educational purposes is always free of copyright fees.