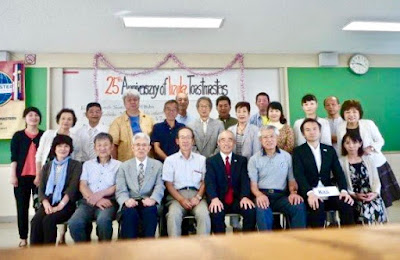 Amidst the Iizuka Silver Jubilee entertainment - sing alongs, vocal duo, and flute play, some members made this incredible, impromptu yet previously scheduled FaceTime computer connection in English from 8500 kilometers away.  Mama Mia!  it’s Copenhagen calling Iizuka.  A young man talking to Iizuka members on the computer was a Vietnamese engineer, who upon graduation from Kyushu Tech, Iizuka Campus, started working in Denmark a few years ago.  It was the highlight of the party!

Kyushu was new to me 25 years ago and I owe the name “Chikuho” (collective name of cities, once flourished coal basin in central Fukuoka Prefecture such as Iizuka, Tagawa, Nogata) to Rob Duncan, a Canadian Toastmaster (TM hereafter) whom I called on in Winnipeg after I attended the TM Chicago Conference in 1999.

All I knew about him then was he spent some years at Aso Hospital, Iizuka  teaching English to hospital doctors and nurses, and in 1993 started Iizuka TM Club during his stay, 4-1/2 years ahead of Kitakyushu TM Club, which Albert Moe, retired Boeing TM and I, also retired and a returnee from the U.S., co-founded.  My curiosity was how Iizuka, far smaller city than Kitakyushu, could launch a club so easily with speed and success.  My visit gave me a glimpse of his passion and personality, and in addition, the  indigenous motivational temperament of Iizukans.

Chikuho has an old history, like Yamato (ancient Japan). Troops exploited Chikuho rivers as its Kyushu outpost to send reinforcements to help Kingdom of Baekje in Korea.  In 1700, when the Dutch trading post was set up in Nagasaki, Iizuka (including Uchino, now incorporated into Iizuka) served two traveling stations between Nagasaki and Kokura (Kitakyushu) and further to Edo (Tokyo) through Tokaido.   Coal had been rumored since Tokugawa Shogunate, but it was right after the Meiji Restoration that Chikuho became a coal mine mecca.  Numerous tycoons were born, like Aso, Yasukawa, and Kaijima. 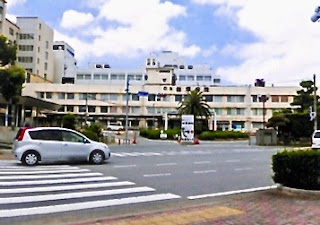 The Aso Hospital Rob Duncan worked for is an off-shoot of the Aso enterprise. In its heyday, Chikuho produced half the nation’s demands, and supplied Yawata Iron & Steel Mill in Kitakyushu since 1901, using the same rivers to transport coal.  As in the Yazoo Delta field horror invented Mississippi blues, the “tanko bushi” (coal miners folk song/dance) hit Chikuho and beyond around 1930.  “The towering chimney should choke/smother moon, heave ho”.

The golden age didn’t last long. It’s negative legacy haunted Chikuho soon and Iizuka population declined 40%.  Iizuka, with the help of coal tycoons, tried their absolute best to get on a roll and bounce back.  Necessity had spoken. Today we see their fruits in high tech institutions such as 1) Kyushu Institute of Technology whose main campus is Kitakyushu; 2) Kindai University, molecular engineering institute and biological & environmental chemistry departments. whose main campus is in Osaka. These campuses boast 5000 students and faculties combined.  The above mentioned Aso Hospital reports over 300 doctors and 2500 employees. Aso Hospital is associated with University Pittsburgh Medical Center and Maryland Anderson Cancer Center.  A civilian initiative called Iizuka International Friendship has enabled young exchange students to go to Sunnyvale, California every year, encouraging study of English. Iizuka had a sense of urgency far better than Kitakyushu.

This year Iizuka TM club celebrated its 25th Anniversary and I was invited by  Pres. Hiroshi Nishiyama, ACG & CL.  I’m glad to return to Iizuka, expecting to see the now verdant slag heaps I missed for years.  Meanwhile I contacted Rob and Naoki Tsukamura (ex-Toto engineer, Kitakyushu and one of the founding members).  It was Tsukamura who introduced me to Duncan, as the blazing fire whose departure was regretted by all with tears. Both men complied and I read their messages for them.  Below, however, I’m citing Founder Duncan’s message. 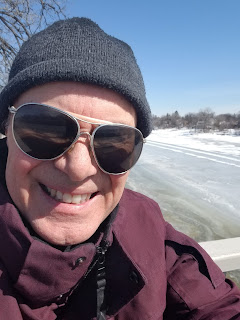 "Congratulations on your 25th Anniversary, Iizuka Toastmasters. That's wonderful!! I recall the Charter Presentation for Iizuka Toastmasters at Cosmos Common on October 16th, 1993. Toastmasters Tadokoro and Oishi, Members of Fukuoka Club, gave us official guidance during the charter process.

Recently, I fell and broke my hip. Since my hip has been fused for over thirty years, it is difficult to receive standard hip repair surgery. Therefore, I have a long wait for natural bone growth. During my recuperation, it is nice to know that Iizuka Toastmasters has reached the 25 year milestone.

I would like to close with a little story.  In Iizuka, I used to visit a bonsai shop on Shin Iizuka Eki Dori (street). The beautiful little bonsai were very interesting to me. I recall the shop owner collecting moss (koke) where it grew near the streets. He used the green moss with bonsai displays.

Moss makes me think of lichen, L-I-C-H-E-N (pronounced like - en).  Lichen is similar to moss. And the word lichen brings to mind a quote from the English writer John Ruskin, who lived from 1819 to 1900. Coincidentally, this quotation comes from "Essays by John Ruskin...", published by Charles Scribner's and Sons in 1918 -- exactly one hundred years ago!

'...among the mountains the silver lichens rest, star-like, on the stone; and the gathering orange stain upon the edge of yonder western peak reflects the sunsets of a thousand years.'

Lichen makes me think of longevity. Now, I reflect on the longevity of Iizuka Toastmasters -- a quarter of a century. 25 years of memories. Arigato. Thanks for the memories."