There're quite a few YouTube videos today on Chiune Sugihara, but I was struck with this 20-minute Hirameki TV project "George Bluman's Story of a Jewish Family Saved by Sugiura's Visas" released on February 15, 2014, just a few months ago. George Bluman, professor of mathematics at British Columbia University, speaks of his father (Nathan), mother (Susan), and uncle’s family, and how they escaped Poland and Lithuania, from the Nazi's threats, thanks to Sugihara's visas. They traveled through Siberia, Vladivostok, Japan Sea, Kobe, Tokyo, and the Pacific Ocean to their final destination, Vancouver, Canada. A few ten dollar bills were all their parents had left after such a long journey. Nathan had to work immediately and secured a job as a meat packer and Susan as a seamstress. Nathan held an engineering degree from a Warsaw University but was not recognized in Canada. He had to enter a Canadian University to earn his degree anew, this time in agricultural studies.

George Bluman contends that it was only after the 1980s that Nathan found the name of Chiune Sugihara, as the Japanese Consul in charge who saved them, after reading "Fugu Plan" – the untold story of the Japanese and the Jews during WWII - written in 1979 by Marvin Tokayer and Mary Swartz. Nathan wrote to Chiura Sugihara to thank him. George did not mention if Nathan's letter ever reached Chiura, who was then no longer a diplomat, living in Moscow working as a trader.

The "Fugu Plan" book was news to me. I'm aghast. In building Manchuria, Japan planned to accept immigration of white Russians into Manchuria, and form a sort of autonomous region. Some countries, including the U.S. were not against the plan, at least not initially. Some Japanese coined it the Fugu Plan, analogous to the proverb "poison quells poison" - a double-faced delicacy or death of a puffer fish. It was well known that Japan won the Russo-Japanese war with aid from friendly white Russian financiers. The key then was how to harness the economic and political power of white Russians. The plan, however, was negated at the NYC World Jewish Congress and subsequently abandoned. 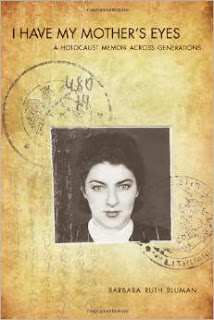 George Bluman then spoke of his sister Barbara who died of cancer in 2001 without finishing her book, I have My Mother's Eyes. Barbara's daughter, Danielle completed it in 2009 with help from the family. I was impressed with Bluman's dispassionate way of speaking, but brimmed with his profound affection for all his family members. Bluman spared no praise toward Chiune Sugihara and called him a brave man. Bluman says Chiune saved Jewish lives irrespective of the utmost danger he and his family faced. He really believes his parents would have perished in the gas chamber if not for Sugihara's visas.

He spoke of his daughter who became a professor of psychology, specializing in studies about happiness. Bluman quoted his daughter's theorizing that happiness has nothing to do with financial success. Happiest and most respectful is the man who helps others. Chiune deserves respect who was motivated only by his conscience and not out of personal gain or profit. Bluman then rephrases the usual way Chiune is praised. The real savior was Chiune Sugihara, and Schindler should be called the "German Sugihara". Bluman personally established a small Sugihara prize and urges the Japanese to follow suit.

He would like his sister's book translated into Japanese, as the book is full of positive life views (even toward adversaries) and would most likely inspire Japanese youth.

Posted by riodan at 2:33 AM No comments:

A Segment of World War II in Japan 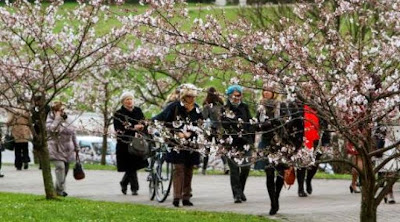 When I first heard about Sempo Sugihara, the diplomat (1900-1986), I thought of Karl, my San Diego friend who came over from the Baltic. Karl was an IEEE Fellow who made many trips to Japan. When I told him I was visiting St. Petersburg, he introduced me to his Russian friend who spoke English. I missed the chance to ask Karl whether he was from Latvia or Lithuania before he passed away in early 2000s. He never mentioned any issues with his Japanese visa, so I assumed he was from Latvia. Back to Mr. Sugihara, whose real name was Chiune Sugihara, a hard name to remember. He used Sempo instead, which caused confusion in identifying him after his departure from the Japanese Foreign Ministry. Dispatched to Manchuria after entering the Foreign Ministry, he studied Russian and German in Harbin. There he not only married a Russian woman, but converted to Russian Orthodox, under his baptismal name Pavro Sergeevich. The marriage ended in divorce. I learned that he gave all of his savings to her family. He returned to Japan and remarried and was sent to Finland in the 1930s.

The "Visas for Life" story happened when he was stationed in Kaunas, Lithuania as vice consul. The Jewish Virtual Library called it the Miracle of Chanukah in 1939. Solly Ganor, an 11 year boy, was the son of a Menshevik refugee from the Russian revolution in the early 1920s who settled in Kaunas. The family prospered for years in textile import export business before World War II. Young Solly Ganor, concerned with Polish Jews entering Kaunas, gave most of his allowance and savings to the Jewish refugee boards. Having given away all of his money, he went to his aunt's gourmet food shop to borrow a Lithuania lit (Lithuanian dollar) to see the latest Laurel and Hardy movie. In his aunt's store he met Japanese Consul Chiune Sugihara. Consul Sugihara overheard the conversation and gave young Solly two shiny lit.

Impulsively, the young boy invited the Consul with kind eyes to his family celebration of the first night of Hanukah in 1939. The surprised and delighted Consul gratefully accepted the young boy's invitation, and he and his wife Yukiko attended their first Jewish Chanukah celebration. Solly Ganor and his father were soon friends with the Consul and they conversed in Russian. Later Solly Ganor and his father witnessed Sugihara in his office calling Russian officials to get permission to issue visas across the Russian borders. With the help of a secretary and Yukiko, Sugihara handwrote visas for days and nights, at a hotel when the consulate was closed, and at the Kaunas Station right up until the train started to leave. The visas produced numbered almost 3,000. Counting two to three per household, he saved 6,000 to 7,000 people, thus was called "Schindler of Japan".

I missed viewing Yomiuri TV’s broadcast of a special program on Sugihara in 2005 to mark the 60th anniversary of the end of World War II. The drama was based on Yukiko Sugihara's story. Honored along with Sugihara were Consul Saburo Nei (1902-1992) at Vladiostok and Dr. Setsuzo Kotsuji (1899-1973). Consul Nei studied Russian with Sugihara and helped Jews sail to Tsuruga, Japan from Vladiostok. Dr. Kotsuji did visa extensions and voyage transfers for their destinations from Kobe. Dr. Kotsuji, born to a Kyoto Kamo Shinto Shrine priest family, became a Christian, and then converted to Russian Orthodox after studying at the Pacific School of Religion in Berkeley, California. Dr. Kotsuji assisted the transit groups stranded in Kobe through religious connections and sought advice from his ex-Mantetsu (Manchurian Railroad) boss Yosuke Matsuoka (1880-1946), the incumbent Foreign Minister (FM), who was designated as a Class A War Criminal after the War, responsible for the 1940 Tripartite Pact (Germany/Italy/Japan).

Matsuoka himself was not anti-Semitic as a Christian chaperoned under the U.S. Methodist missionaries. Matsuoka immigrated to Oregon as a teenager when his father's business went bankrupt. He returned to Japan due to illness after graduating Oregon University law school. FM Matsuoka gave Kotsuji his best personal advice on how to negotiate with Kobe Police. The deal was that FM would release the travelers if the Kobe Police agreed. Kotsuji played his cards tactfully and succeeded in getting not only visa extensions but also transit travelers to sail out of Kobe to their respective destinations. I just cannot imagine how those thousands of exhausted people who arrived from a long Siberian journey, fared in Kobe while in transit.

Note: Photo above is of Sakura Park, dedicated to Chiune Sigiura in Vilnius, Lithuania

Posted by riodan at 9:56 AM No comments: