The 2008 Toastmaster International Convention was held in Calgary, Canada. I made plans to attend the convention early this year. My plan included a trip to Vancouver to visit Nikkei Place, Burnaby, on the way to Calgary, and donate a copy of my translation of Dear Miss Breed book. Nichola Ogiwara at Nikkei Place responded that she could arrange an opportunity for me to give a talk that day if I so wished. I answered that would be a terrific idea.

My talk on Joanne Oppenheim's Dear Miss Breed and what motivated me to translate the book was to start at 2:00 PM on Saturday August 8, 2008. My son-in-law Raymond took a few days off to accompany me from Kirkland, Washington to Vancouver, Canada. We thought we had enough time to arrive and refresh ourselves before the meeting. Was I wrong!

It took over an hour to cross the Canadian border! There was a long line of cars ahead of us and only three gates were open. It was almost like the Mexican border on weekends. Then I was instructed to go inside customs to get my passport stamped.

Nichola was already up on the second floor, probably explaining the "no show" of the scheduled speaker. Her face showed much relief the moment she saw me racing in.

I had to jump start my talk to the audience of about a dozen Caucasians as well as Japanese Canadians, evenly split. I'm glad we made it and I feel my speech was well received. 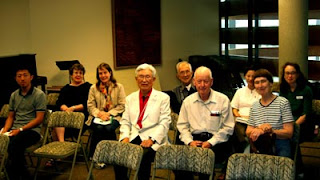 Nichola was kind enough to give me a guided tour of Nikkei Place after my talk. She also gave me a book about Japanese Canadian concentration camps during World War II.

About 22,000 Japanese Canadians were sent to the British Columbia interior, 100 miles or 160 kilometers away from the coastline, where a dozen concentration camps were located. About ten percent of them were sent to Tashme Camp, the famous of them all, located 14 miles east of Hope. The name "Tashme" came from three Royal Canadian Mounted Police (RCMP) security commissioners, TAlor, SHirras and MEad.

The book mentions a small, beautiful Japanese friendship garden that was built in Tashme in the summer of 1991 dedicated to all the Japanese Canadians encamped there. My son-in-law and I were originally planning to stay in Hope but later changed plans and had to leave for Golden. If I knew about the garden prior to the visit, we surely would have taken the time to visit and see the garden.

I might add that I bought and watched a White Pine Pictures film WATARI DORI: A Bird of Passage produced by Linda Ohama. The story is about the reunion of Irene Tsuyuki, a camp school child, and Winifred Awmack, her school teacher, 50 years after the war. It is another beautiful story that parallels the experience of Miss Clara Breed. I can donate this film to a Japanese library upon request (first come first serve).
Posted by riodan at 3:41 PM 1 comment: