A History of Sweets

Have a sweet tooth?  Listen up!

My speech I gave at Toastmaster's recently was about the history of sweets, favorite things to many, I'm sure. Relax in your chair and enjoy.  Maybe even close your eyes.

Before Christopher Columbus, the world didn't know anything about chocolates - such a delicious treat didn't exist.  It was Hernandez Cortez, the Spanish Conquistador, who introduced it, borrowing the name from the language of the Aztecs, Nahuatl, "xocolatl".  This word is built on xococ "bitter", a drink made by a sugar free people from Cacao, itself from Naguato cacauatl "cacao".  Similar Aztec words are avocado, coyote (wild animal, smuggler), tecolate, chipotle. Chipotle is the top California Mexican grill.

Now let us review the Mayan myth a little bit. God was creating the world to be fair and well-balanced:

Give country A a vast land but, be harsh in climate.

Country B is small - let's compensate it with delicacies from land and sea.

Now comes Mexico. Fairly good sized but mostly desert and hot. God said OK, leave it as is....  God heard a shadow voice. "It's a pity to leave it as is. Can you add something?"  So God sent Quetzalcoatl to check it out. He brought many goodies to Mexicans: corn, cotton, and cacao in particular, my subject tonight.  But this benefactor god, disguised as a feathered serpent, vanished suddenly. 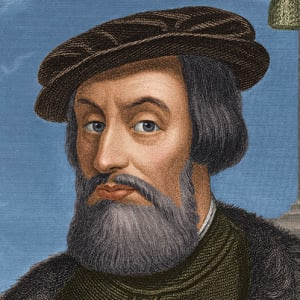 Cortez, Spaniard I mentioned above, landed in 1519, the year Quetzalcoatl was believed to return. Cortez faced no resistance. Instead, Cortez was welcomed by Montezuma, a Mayan Emperor. Montezuma served Cortez in golden goblets, a "Theobroma" ritual.  In Greek, theobroma means food from God.  Cortez found it bitter, and did not find it to his taste. However, Montezuma reportedly drank 50 chocoatl a day. To make the concoction more agreeable, Cortez and his countrymen added vanilla and other miscellaneous ingredients.

The Spaniards took chocolatl to Europe.  It gave a sudden rise to all kinds of confectioneries and world enterprises. After many centuries, companies like Hershey, Godiva, Nestle, See's, Mars, Kinder, and Dove survived, just to mention a few. I'm sure you know them well.

Many thank Cortez for adding tasty pleasures, tickling our taste buds and giving us moments of sweetness. Today’s talk was just a tasty slice of history. 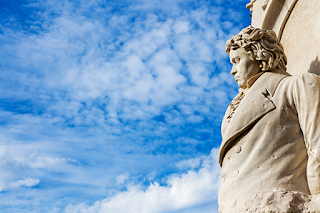 
(Joy, oh what a godly sparking, daughter of Elysium, drunk with fire we're embarking, blissful, in your holy room Your spell's magic mends each other's ties our customs strictly breach, all the people will be brothers where your gentle wing shall reach)

One miracle in postwar Japan has been that people say the year isn’t over without listening to a chorus singing the 4th movement of Symphony No. 9 (affectionately called “Dai-Ku” in Japanese) composed by Master Ludwig Van Beethoven. Major cities as well as the local cities, Hokkaido to Kagoshima embrace Philharmonic Orchestras’ performing this choral symphony at the close of each year, some even being performed on New Year's Eve. Let’s explore the background story, tracing some historical twists from both World War I (WWI) and World War II (WWII).

Why and how this tradition came to be, comparing, for instance, to Germany where very limited yearly performances are reported. For one thing, Japan was the first country in Asia where the chorus echoed triumphantly by Germans who performed the piece under unusual circumstances. It was the year 1918 (just one hundred years ago). German POWs from WWI were detained in Bando City camp, Tokushima in Shikoku (see 12/28/2010 post for details). I visited Bando Concentration Campsite, Tokushima in 2010. The memorial German House opened in 1972 with exhibits of utensils German POWs used to bake bread, make ham and sausages, etc. What was fascinating was a diorama and a robotic theater illustrating the Germans playing Beethoven’s “Dai-Ku” symphony, with instruments in their hands and a chorus group (men only). Dai-Ku performance was recorded in Tokyo under the Japanese conductors since 1920s. In 1927, the former NHK orchestra played under Joseph Koenig. Conductor Hidemaro Konoe directed Dai-Ku 10 times between 1928 and 1935. Joseph Rosenstock conducted the former NHK orchestra in 1938, the year celebrating 100 years after Beethoven’s death.

At the end of 1947, “Dai-Ku” was performed as a tribute to all young students killed during WWII. After 1940, Dai-Ku went to Kansai and spread further to major cities, including Kitakyushu, the town where I live. The biggest ever Dai-Ku performance was at Osaka Castle Hall which accommodated a 10,000 piece choir sponsored by Suntory Company. The 38th Dai-Ku was performed last December. Surprisingly, age of the performers varied from six to 97. Basically there was no audience. It was 1971 when “An Die Freude” was adopted to become the EEC National Anthem. It it great all EEC countries could unite under the same flag and the same anthem.

I was in Vienna in 2005 and Beethoven Garden at Karlsplats but not the Museum at Heiligenstadt, at the north end of Wien. I had a chance to visit Gustav Klimt’s Secession to see the famous “Beethoven Please” mural on two bent walls where Klimt visualized “Dai-Ku”. (Visit site to see a small portion)

Lastly, I’d like to introduce the Kitakyushu Citizen Chorus Group, called Freude Call. My friend Ace Ikeda (appearing in 4/9/2017 post, who visited Heiligenstadt) sent me the attached “40th Anniversary” brochure. Quoted below are voices of three long time members. Touichiro Izu, tenor, former (lst) President – “Congratulations on 40th anniversary year - my memory is still fresh like it was yesterday, starting with 300 members - Let’s look forward to the next one.” Rui Yoshida, alto - “I joined first when I was in 6th grade, together with my mother, then restarted about 5 years ago, with refreshed resolution - I like mostly high pitch melody of Double Fugue but have a hard part that is difficult to sing well and am still practicing.” Yasuko Hanada, soprano - “after 10 years of trying, my voice now comes out smoothly without much effort - wish to pass on the knowledge to future generations.” 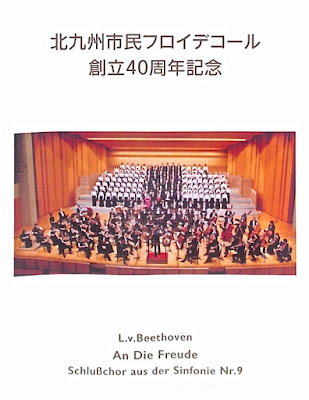