His name is well known in the U.S. but he possibly goes unrecognized in Japan. William H. Marumoto, better known as "Mo". His middle name is Hideo, but it was seldom used I guess. He had an unexpected massive heart attack and passed away in late November at the age of 73.

His funeral service was at the McLean Bible Church (MBC), Virginia. MBC is famous for its online Internet Campus which features live video services with music and message as well as an online community. I came to know the Internet Campus through my Toastmaster friend I met at the Washington Convention a few years ago. Sherrie is her name. She came from Taiwan and works at the National Institute of Health in Bethseda and holds a PhD. She is in the MBC Choir and I saw her singing at the MBC Cultural Diversity Celebration (CDC) program awhile ago. 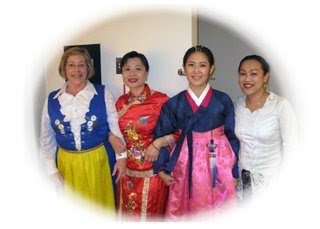 MBC Diversity Culture
Celebration Choir
She wrote to me recently that she sang for Jean, one of the choir members, Mo Marumoto's wife (really a small world). She reported that it was a two hour Memorial Service. Elaine Caho, Secretary of Labor, as well as Norman Y. Mineta, former Secretary of Transportation, delivered their messages, mentioning how Mo welcomed them when they first arrived in Washington DC as young professionals.

Marumoto received more than 25 national professional awards for his work in higher education, fundraising, direct mail campaigns, events management, and publications. In June 2008, he was honored by President George W. Bush with the Lifetime President's Volunteer Service Award. His staff had estimated that he had contributed more than 40,000 volunteer hours to 35 local, regional and national non-profit organizations over a 50-year period. Mo sat on numerous boards and commissions, including the Board of Trustees of the Japanese American National Museum and Whittier College, of which he was a graduate.

He was very enthusiastic in doing promotions. He was also a member of the Wolf Trap Foundation of the Performing Arts, the Asian and American Pacific Islander American Scholarship Fund (APIASF), and the National Asian Pacific Center on Aging. Marumoto is listed in Who's Who in America and Who's Who in Finance. He was named in the spring of 1996 by Avenue Asian Magazine as one of the 500 most influential Asian Americans in the country. He was also named by Asian Weekly as one of the most influential Asian Americans in Washington, D.C. He was the first Asian American to become a member of the Congressional Country Club in Bethesda, Maryland.

I found a couple of harsh and sour discrediting notes. First is his Watergate connections because he had an office next to E. Howard Hunt and G. Gordon Liddy, and he worked under H. R. Haldeman, John D. Erlichman and Charles Colson, all of whom did prison time for their roles in the Watergate cover-up scandal that rocked the nation and culminated with the resignation of a disgraced Nixon. Mo, too, was subpoenaed and grilled by the investigation committees but was not indicted. The other negative situation was the "Brown Mafia" charge against him. I'm sure he would relentlessly discard these charges, as he was so proud of his placement records of minorities in senior level government jobs. He attained some records that have never been broken since.

He was a Nisei, born in the Santa Ana area, and he and his family were herded with other Niseis during WWII into stables at the Santa Ana Race Track. He was later relocated by train under the eye of an armed FBI agent, to an internment camp in Gila Bend, AZ, where the family remained until the war ended. Mo wrote: "That was my first and most unforgettable experience with the Federal Government."

Mo graduated from Whittier College and was actively involved in alumini relations at Whittier for 10 years. He also worked in planning and development positions with UCLA and the California Institute of the Arts. Mo moved to D.C. in 1969 as assistant to the Secretary of the Development of Health, Education and Welfare, responsible for recruiting senior executives for the office of Education. In 1970, Mo was appointed a presidential aide responsible for filling cabinet and sub-cabinet positions.

The following is my favorite quote from Mo:

"One of the myths some folks have is an overestimation of their own worth. When you're Presidential Aides such as Jim Baker or Dick Darman, you may expect six-figures. But those folks are the exceptions. Out of 5000 political appointees, probably less than 2% get the six-figure salaries when they leave government."

I read Mo's interview in an Japanese article by the Japan Commerce Association of Washington DC (JCAW) in April this year. He lamented that most Japanese Americans prefer professional jobs such as doctors, lawyers and engineers, and avoid entering politics. He was of the opinion that more Pacific Asian Americans need to show dedicated interest in becoming politicians in the near future, in view of the increasing trends such as 30-40% of UC graduates belong to ethnic groups. Mo has said that the population of Pacific Asian groups is almost 17 million, which is approximately 4-5% of the U.S. population. Yet politically, they were well under-represented - almost one one-hundreth of one percent.

He gave advice to Japanese businessmen coming to Washington and major U.S. municipal cities which stated:

Posted by riodan at 8:57 AM No comments:

Professor Morimo of Chuo University wrote to me that he ordered my translation of the book Dear Miss Breed for his multicultural education class. I appreciated the endorsement. He published a book in June this year titled, The Theory and Practice of the Studies of Japanese Immigration from Publisher Akashi Shoten.

Professor Morimo also suggested I send a copy to Kokei Uehara, President of the Brazilian Society of Japanese Culture. I followed his advice. A few days ago, I received a photograph of President Uehara holding the book I sent and felt very honored. 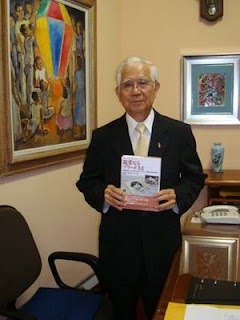 According to a book written by Yasunori Maruyama, Professor Emeritus of Komazawa University, The Strength of the Japanese Brazilians over 100 years (2008), the life of President Uehara is the embodiment of the Japanese immigrant saga. He left Okinawa when he was 9 years old, accompanied by his uncle and families on board the vessel Santos, in order to join his elder brothers who immigrated four years earlier. Kokei was the youngest of 8 children. (They had not seen their parents because of the war and their father died in Okinawa during the war.) His brothers had cotton and coffee farms in the City of Olympia, 500 kilometers from Sao Paulo.

While engaged in farming to help his brothers, Kokei was sent to school. Kokei excelled in school, conquering the language handicap. Medicine was his preference, but his brothers who had supported him, suggested "pursue engineering or back to the farms." Thus he chose fluid mechanics at Sao Paulo University and had a chance to work with a French research team. It was recommended that he study at the Sorbonne University. After graduating, he designed dams, including the Itaipu dam over the Parana River. He was sent to UNESCO as a Brazilian representative from 1976 to 1979. He taught at Sao Paulo University for many years. He was chosen as the most popular professor in the engineering department for 13 consecutive years.

He served as the chairman of the Japanese Immigration Centennial celebration of the Japanese immigrants to Brazil. When His Imperial Highness Crown Prince Naruhito visited Sao Paulo, President Uehara served as the guide to the Prince. He visited Tokyo in April this year and gave a talk at Hotel Okura. Ryukyu Shimpo reported that he said he would construct the Japan-Brazil Composite Center as the place most young men would like to take their lovers and where people can learn the Japanese culture from making Miso soup to enjoying the Noh Play. The center will be a twin-tower building of 20 floors, with a total space of 93,600 square meters, costing 70 million dollars. This project, however, is reportedly held in abeyance at the moment.

The Japanese immigrants totaled 250,000, combining 180,000 in pre-war days and 70,000 in post war days. Currently, Japanese-Brazilians total one and half million in Brazil.

In 2000, I had a chance to tour the Itaipu dam. The dam's structures stretch almost 9 kilometers and reach a height of more than 200 meters. The generating capacity is 12,600 megawatts - enough to supply both a quarter of Brazil's electricity needs and 90% of Paraguay. The reservoir is twice the size of Biwa Lake of Japan. It's a wonder of the modern world. I bought a Itaipu cap to wear on the day of the visit, and went around by an Itaipu courtesy bus. I remember the tour-guide emphasized their care for the environment and caution they exercised in protecting nature as is. There was a place where I straddled the border between Brazil and Paraguay.
Posted by riodan at 10:26 AM No comments: