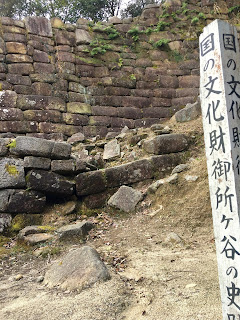 One of my New Year’s resolutions was to visit the so-called Kogo-Ishi (神籠石), the mysterious earthen works or stone rampart discovered in the Meiji era (1868 - 1912), about a dozen of them concentrated in Northern Kyushu, including that of Goshoyama (御所山) and Yukuhashi-City ( 行橋市 ), about 30 km southeast of Kitakyushu City. The debate has been whether these sites were fortresses or religious sites?

Last summer, my friend in Munakata City invited me to join his continuing group trips to visit a mecca of mid-Kyushu burial grounds around the Kikuchi River Valley, Yamaga City in Kumamoto. He mentioned the next trip in September includes “Chibusan, Obusan, and Tonkararin" I asked him 'are they Japanese?'. He answered, half chuckling, “Yes, they’re just like ‘Obasan, Sanbasan.’” They are famous ancient barrels, some ranking as national treasure”.

Tonkararin is a combination of a natural cave, ditch and/or drained culvert like an underground tunnel along the hilly slope 450 meters long where man can wiggle through in the dark. It is unknown why it was made. Named after perhaps the clinking sounds of a stone thrown in. You have to bring your own light and attire you don’t mind getting dirty in. 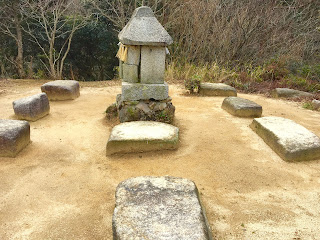 I joined them for a full day microbus tour, venturing into the Tonkararin tunnel, peeking into old tombs and mounds, side caves, expansive excavation sites and remains, to examine earthenwares, iron works, etc. One of the tumulus,”Eta Funayama”, was famous for a treasure class sword with an inscription inlaid in silver with the oldest characters ever found in Japan. The Korean style octagonal drum tower and the archaic commissariat complex, including a set of barracks for garrisons and storage house of rice, reproduced on the Kikuchi Castle Site Park was the highlight of the trip. I've heard a speech made by one of my Toastmasters' friends living in Yamaga, of a century old legend but I was unable to connect it with the AD 663 'Battle of Baekje' between the allied Tang Dynasty / Silla Kingdom forces and allied Baekje / Yamato forces, which resulted in the demise of Baekje and the defeat of Yamato trying to save Baekje.

Panicked Yamato, in fear of Tang and Silla's invasion, guarded Dazaifu and homeland, building castles at Mizuki, Onojyo and Kizan with the help of exiled Baekje generals and artisans. That much I knew, but didn't know Yamato also built another castle in Yamaga, 80km south of Dazaifu. The Kikuchi Castle was supposedly the last backup depot for the worst scenario, serving combat support and military logistics. 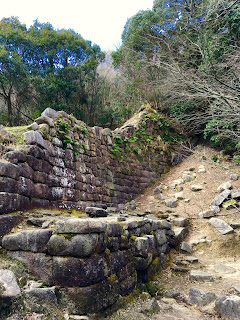 At the Kikuchi castle information desk, I learned also that 20 semi-castles or ramparts were built, a dozen of them heavily concentrated in northern Kyushu. These dozen have held annual Summit meetings for the past 10 years to discuss mutually common findings and subjects. The Goshoyama Kogoishi I mentioned above is one of them and quite close to Kitakyushu, where I live. I added it to my bucket list for 2016 if I could tolerate the climb.

I first targeted it on my birthday, March 4. The family had some plans for me, so I waited a week for a fine warm day. Climbing was hard and tough for this octogenarian. I recalled El Teposteco, the sacred mountain, near Cuernava, Mexico (2000m above sea level, but 800m above Tepostlan land level) was one of my last climbing experiences. That was 15 years ago. Goshoyama is 250m high. But Kogoishi is at the Middle Gate, about 150m high. I climbed over and above the Middle Gate to Keiko Shrine close to the top and had my lunch. While on the trail, I came across a dozen group climbers in decent mountaineering clothes. I celebrated my belated birthday with a tea cup toasting. Now I proudly declare that the photos in the blog are all mine. I truly enjoy these adventures.