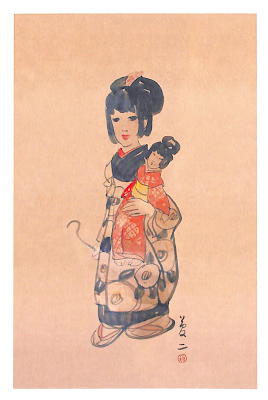 “I waited long and patiently for you
like a primrose waiting for the moon,
Yet still ‘am unsure of being betrayed?'
(Song composed by Tadasuke Ono)

This poem was written by the famous painter Yumeji Takehisa, 1884-1934, sung by Mieko Takamine whose song once dominated the airwaves in Japan. I do not follow this type of art, but I remember the song. Yumeji’s Bijinga (portraits of beautiful women in wood print, which predate photography) has been applauded as the second most visited of Hiroshige in Taisho.

Yumeji was born near Okayama, spent his boyhood there, and moved to Yahata (where I live) when his father was employed by Yahata Iron Works in 1901. There are records that indicate Yumeji worked at the same steel mill as a draftsman. It probably was a short stint since he headed for Tokyo shortly thereafter. I found evidence of the journey he took in a dedicated park named after him with a couple of Bijingas in his honor. I found a couple of art museums associated with him in two different locations in Okayama - one in Setouchi where he was born, and the other in Okayama City, Tokyo (Yayoi Museum). There are a number of other museums and galleries associated with him in Ikaho, Kanazawa, and other locations. Yumeji’s path to success came when his entry won the “Junior High School World” contest in a magazine. Then came the Great Kanto Earthquake in 1923 which delayed his rise to fame temporarily, but he inevitably established his name as Bijinga Master. Yumeji spent some time in the US and Europe before he died in his 50’s. See Yumeji's Haiku on his trip below.

About a month ago, the newspaper carried one of the unknown Yumeji’s painting (in black and white) owned by Yabeya Teahouse (owned by the Konomi Hon-Ke Family) in Yame City where I took my Japanese-American friend to bury a part of his father’s ashes at Yame’s ancestor’s temple. Yame is about 100 kilometer south of Kitakyushu. The paper stated that Yumeji traveled to Kyushu for a few weeks during which the Konomi’s personally bought the painting from Yumeji.

I wrote to Yabeya Teahouse to find out if the Yumeji’s painting in color was available, and if so, can I post the image for my blog. Mr. Kenichi Konomi, 14th generation master, wrote back, enclosing the requested color postcard and the Yabeya’s business pamphlet. The title of the painting is “Embracing A Doll.”

Here’s a brief history of Yabeya. It started about the same time that the Edo period began (1704) under the Tokugawa Shogunate. Yabeya was a general merchandise supplier and vendor to the Kurume Domain. They settled down in Yame in 1865, gradually specializing in tea making. The Yabeya’s house, factory and warehouse they built has been designated as Yame’s Cultural Property. "Gyokuro" cha is their top premium specialty product described as the 'golden jewel or jade jewel' that uses their signature washi-wrapped charcoal roasting furnace. My family was lucky enough to live near the Sayama-cha site in Tokyo, and now Yame-cha site, fairly close to where I live now in Kitakyushu. While in the US, we shopped at the import shops, such as Marukai, LAX. Sencha, Hoji-cha,Genmai-chai are readily available. My daughter in Ventura County says tea bags are sold at their nearby Costco these days. I myself cannot live without good tea in my life.

Money is short
wherever you are,
in Japan or else at the end of the year