Cuba Part 3: “A Message to Garcia”

"In all this Cuban business, there is one man who stands out on the horizon of my memory like Mars at perihelion. When war broke out between Spain and the United States, it was very necessary to communicate quickly with the leader of the insurgents. Garcia was somewhere in the mountains of Cuba - no one knew where. No mail or telegraph message could reach him. The President must secure his cooperation, and quickly. What to do! Some one said to the President, "There’s a fellow by the name of Rowan who will find Garcia . . ." - Elbert Hubbard (1856-1915) 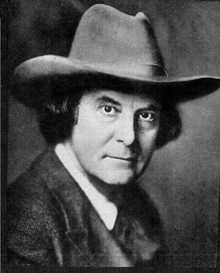 Speaking of Cuba, I cannot forget the above quote from “A Message to Garcia” written a little before 1900 by Elbert Hubbard. I read it in the 1986 best seller Letters of a Businessman to His Son by G. Kingsley Ward (1932-2014). Mr. Ward was an ex-PricewaterhouseCoopers accountant turned successful entrepreneur in Canada. After having multiple heart surgeries, he felt a dire need to leave messages for his son.

Upon the publication of his paternal messages, and despite his reluctance, the book hit the market as the businessman’s bible, joining the ranks of Dale Carnegie’s and Napoleon Hill’s books. I read the Japanese translation hand-carried by the translator Saburo Shiroyama as a souvenir when he came to San Diego to interview my then employer. Apparently he was so deeply impressed with G. K. Ward that translating the book became his mandate. Shiroyama passed away in 2007.

It seems that “A Message to Garcia” by Hubbard came out originally as a pamphlet that was a little over 10 pages. It was so popular that it was distributed among the Russian soldiers sent to Siberia during the Russo-Japan War. The pamphlet became known to the Japanese through Russian captives, and it was immediately translated and distributed to top ranking Japanese officers. 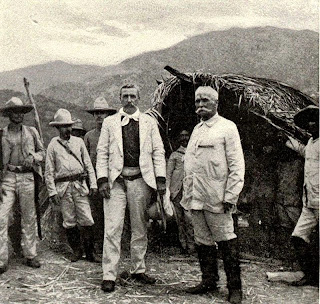 To answer the call of President McKinley, Lt. Andrew Rowan acted immediately and set out to Kingston, Jamaica to take a fishing boat from St. Ann’s Bay to a Cuban beach near Sierra Maestra. He then trekked through the mountains heading for Yara and rode a horse to the general’s quarters where he succeeded to meet General Garcia and hand delivered the President’s message. I luckily found Lt. Rowan’s report online titled “How I carried the message to Garcia” (Foundation Magazine).

G.K. Ward admonished that General Garcia may be gone but there are still many General Garcias in the world to whom messages must be delivered. Could you be an Andrew Rowan? Employers need to hire a go-getter type person like Rowan who doesn't question why or how and make excuses.

I did a search online for “A Message to Garcia” in Japanese, in the hopes that I could find the Japanese translation that was actually distributed by the Meiji Government to top ranking officers during the Russo-Japan War. Instead I found the new Heisei translation advertised as an Amazon self-help book - a best selling item, teaching self-motivation on how to become a dependable person. Elbert Hubbard is still being lauded for over a century in Japan. 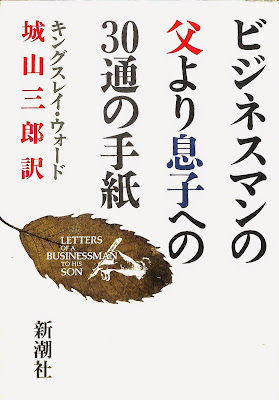 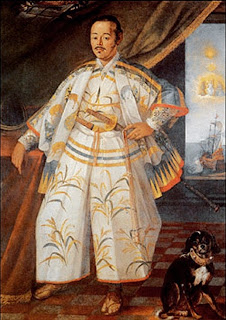 About 120 years after Cristobal Colon’s landing in Cuba, Rocuyemon Foxecura, or Hasekura (1571-1622), the chief delegate of the Keicho Embassy (as it was later referred to historically) and his troupe of 20 took to the sea from Veracruz, Mexico to Havana, Cuba on board the Spanish Armada in July 1614 on their way to Europe. Rocuyemon was a Samurai retainer serving a powerful Sendai Daimyo Date Masamune (1567-1636), who was close to Taiko Hideyoshi and the Tokugawa Shogunate. His mission was to open up trade relations with Espana and Nueva Espana (Mexico) and to ask the Vatican Pope to send missionaries to Sendai.

Rocuyemon was accompanied by Luis Tesolo, a Franciscan friar, as assistant and interpreter. Although the Embassy was cordially received in Europe, the answers they got were noncommittal both from Spain and Rome, as it happened at a time when Japan was moving toward the suppression of Christianity. What they found upon return from an eight year absence was Christian persecution and Tokugawa’s forced isolation policy. Rocuyemon died in obscurity shortly after.

The very existence of the travels of Rocuyemon was forgotten in Japan until the reopening of the country after the Meiji Restoration. In 1873, Tomomi Iwakura, head of Japanese embassy to Europe, learned about the Keicho Mission and was surprised when he was shown documents during their visit to Venice, Italy. 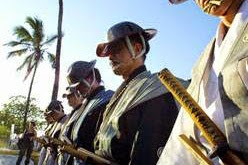 The rediscovery of Rocuyemon’s embassy inspired a community in Sendai and their efforts culminated in obtaining an UNESCO Memory of the World Listing designated for 1) Portrait of Rocuyemon, 2) Certificate of Roman Citizenship and 3) Portrait of Pope Paul V. Since the beginning of the new millennium, Sendai Ikuei Gakuen (Junior and Senior High school) has been exchanging students with Cuban counterparts for sports and music events. When the Ikuei Gakuen celebrated its 100th anniversary in 2001, Ikuei donated Rocuyemon’s statue to Havana City. Citizens of Sendai raised funds to send 30 students for the unveiling ceremony at Malecon on the waterfront.

The Cuban government conferred a decoration to Ikuei Gakuen Principal Kato in 2011. Despite the damage from the Tohoku earthquake/tsunami the same year, about 400 Sendai citizens took part in the celebration in Havana and prayed with Cubans for the disaster victims and the quick recovery of Sendai and areas hit hard.

2013 was the year of the 400th anniversary of Rocuyemon’s visit. Rocuyemon has surely reestablished his fame and historical significance after 400 years. His statue in Havana is positioned such that the fan he is holding points to Rome from Havana. 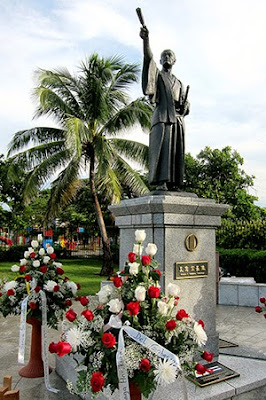 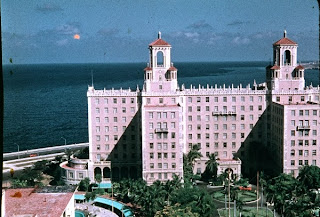 
I am an honest man
From where taje palm tree grows,
And I want, before I die
to cast these verses from my soul.

I welcome President Obama’s historic move to restore relations with Cuba. Seemingly, he has hit snags on issues like the return of Guantanamo Bay base, but prisoner exchanges were done, thanks to Pope Francis, who was born in Argentina. It is encouraging to note that Fidel Castro is backing the U.S.-Cuba thaw. Hope the day will come soon to overcome remaining thorny matters.

I was in Cuba under the Castro regime almost 50 years ago. Cuba is 140 km from Key West, Florida. Havana was still under curfew, guarded by armed soldiers. Ocean front Hotel Nacional de Cuba, Havana’s symbol built in 1930, was my hotel with an unbelievable room rate of 6 dollars a day (one dollar = one peso). Gunshots at night woke me more than once, but I wasn’t scared at all. However, I was in no mood to take a stroll out. My recollection is that Universidad de la Havana was within walking distance from the hotel.

My assignment was to see if the Cuban Government’s Union Electric would barter sugar in exchange for a power grid distribution analyzer made by my ex-employer through one of the Japanese trading firms. At the time, there was rationing going on among the Cuban citizens, and anything beyond real basic necessities like medicines, power generators, etc. were all considered luxuries. I knew the answer before the official denial was given. My visit to Cuba was a brief, intermediate stop along the way for the rest of my sales calls to meet Mexican, Colombian, Venezuelan, and Brazilian representatives.

While waiting for the Union Electric’s answer, during the weekend, my trading agent in Havana took me to see a golf course in Varadero, about 140 km east of Havana. The Varadero club house was originally the “Mansion Xanadu”, a three-story Spanish Colonial Villa, built by Irene DuPont, great granddaughter of Eleuthere in 1930.

The area was deserted and the golf course was not very well taken care of at all. I saw four Japanese golfers tee off, and they were the only golfers of the day. There were no caddies or callers. In fact, there was no one around the course. I was then taken to the Varadero beach by a Cuban chauffeur arranged by my trading agent. Hemingway was said to frequent this beach. Photos were officially banned but I got a few with my camera (see photos). I got one also of the Castillo de los Tres Reyes del Moro from inside the car. 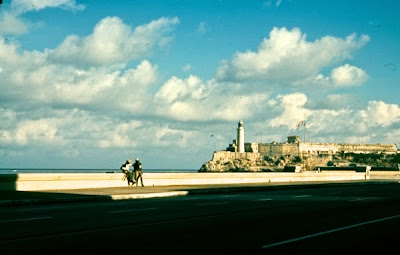 Back at the hotel, I went up to the top floor swimming pool and spent most of my time there in my private paradise until dark, swimming, sunbathing, reading, snacking, without anyone ever bothering me. The Cabaret Tropicana at the Hotel had the best show I’ve ever seen in my life. It was better than Franco Fontana’s Oba Oba, the Brazilian show I saw in Las Vegas at a much later time.