Peacock Garden in Pasadena, California
(In memory of Adele and Guy Stone, our family guardians) 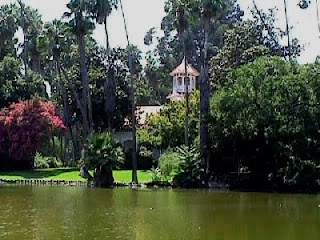 ”Ah my heart dances like a peacock,
the rain patters on the new leaves of summer,
the tremor of the crickets' chirp troubles
the shade of the tree,
the river overflows its bank
washing the village meadows.
My heart dances.”

For over 30 years of residing in the U.S. (which ended in 1994), we were annually at the Thanksgiving Dinner table in Pasadena of the Stones family of Dutch descent born in Pennsylvania. We loved their Dutch oven dishes from yellow split pea soup, potato stuffing, yams, red cabbage, cranberry sauce, pumpkin pie, etc. I met Guy while doing business when I was still single in Japan. Adele took me to a dentist when I had a sudden toothache during my trip from Japan.

They changed houses a number of times from La Canada, San Marino, etc. but they were all in the vicinity of Pasadena, settling finally in an Arcadia senior apartment near Santa Anita Park.

They took me to Caltech, Huntington Library Park, Descanso Garden (the biggest camellia garden in the U.S.), Santa Anita Park, the Rose Bowl, Los Angeles County Arboretum and Botanical Garden. We brought our children and became good playmates with their grandsons. My son was taken to Mt. Wilson Observatory by them when he was in junior high. 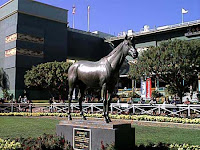 Santa Anita Park was one of the so-called Assembly Centers for the Japanese Americans during World War II and we did not know our San Diego friends Ben Segawa, Ted Hirasaki, the Yamadas had spent uneasy days in a horse-stable-turned ‘abodes’ before they were sent to Camp Poston in Arizona. It’s an irony that I knew about Sea Biscuit before the Japanese internees, because of the life size horse bronze statue on display at the entrance of Santa Anita race track. The 1938 match story of the century, Sea Biscuit vs. War Admiral became a book by Laura Hillenbrand in 2001. The story of the Japanese American incarnation of 1941 to 1945 was published by Joanne Oppenheim in 2006. Could it be a case known as “50 miles is as good as 100 miles?” I saw Adele Stone last at the hospital near to Santa Anita Park in 2008. She was reading a book all alone and no nurses attended.

I have frequented Los Angeles County Arboretum even after I left for Japan. I visited Adele whenever I revisited the U.S. and my daughter’s family in Northern California. The Arboretum is on Baldwin exit off the busy Freeway 210. It‘s a good stopover for resting and wandering about the garden to take in seasonal flowers. The pink Ipe and the golden trumpet trees used to greet me at the entrance. 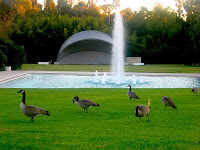 Mind you, this Arboretum is huge, 127 acre (51.4 hectares), 4 times larger than the San Diego Botanical Garden (previously called Quail Garden). You can get a good exercise covering it all. I had covered all corners of the Arboretum on many visits including its historical landmarks such as “Lucky” Baldwin’s ornate Victorian house “Queen Anne Cottage” and the great blue gum eucalyptus tree there, Hugo Reid’s Adobe, etc. Lately, I just stroll the front fountain area, the Stones’ favorite area, and sip coffee at the Peacock Cafe, watch resplendent plumage of male peacocks around the fountain, remembering Guy Stone jokes and his mischievous smiles.

”Because Peacocks spoiled his ‘Origin of Species’ theory. He was frustrated by those feathers. How the extravagant plumage evolved was hard to explain. He admitted that it made him always sick, you know.”

When Guy was gone, Adele gave me Guy’s trench coat, windbreaker and jacket which fit me just right. I like to wear them often. Gone is the joy of stopping by Pasadena now that both have passed away.
Posted by riodan at 2:01 PM 1 comment: 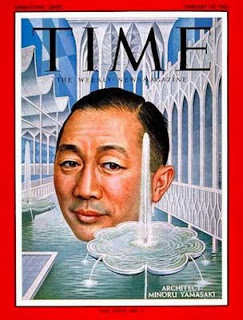 Where were you when the Al-Qaeda terrorists attacked the World Trade Center Towers on Sept 11, 2001? It was 10 years ago but your memory should be very fresh. I myself was in California. I was just back from my trip to South America the previous night and was sound asleep when my daughter telephoned from her work. “Dad, switch on your TV. See what’s happening in New York.” My son had just flown into New York the night before. Wow, I just couldn’t believe it. The Twin Towers were in flames and collapsing.

We observed its 10th Anniversary a few weeks ago. The paper reported Americans all across the land, prayed at churches and laid wreaths at fire stations and remembered, in their own way, a day that was impossible to forget.

Today I wish to talk about Minoru Yamasaki (1912-1986), who designed the WTC, the architect nicknamed Mr. Twin Tower. It was in the early 1960’s that I was working in downtown Manhattan, passing the Port Authority of New York & New Jersey when his project started as a big hole in the ground. The Twin Towers, for your info, were part of a seven building complex that covered a total of eight city blocks. 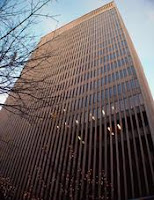 Who was this man, Yamasaki? Time Magazine featured him, so I bought a copy and devoured the article. He was a Japanese-American, born in Washington State. He was a rising star and I recall the IBM Seattle building was introduced as one of his latest works. It looked superb and graceful with modern technology and innovations. I first learned the word “minimalist” applied somewhere in the text. I took it as his efforts to simplify basic structural designs, and save on superfluous cost.

Yamasaki was chosen from among a dozen candidates. I was quite elated that race was not an issue in the selection of the winning architect. When one shows quality and works of excellence, one can ultimately win the job. There were cynical views and comments such as Yamasaki could be easily agreeable in accommodating developers’ demands.

I left New York in 1969, before the towers were completed. The North and South Towers were completed in 1972 and 1973 respectively. I had a chance to visit New York in the late 1980’s. I went to the Observation Deck, or the Top of World, located on the South Tower. As expected, the venue became the most active business center, accommodating the world financial and trading firms.

Yamasaki said: “The World Trade Center is a living symbol of men’s dedication to world peace – a representation of men’s belief in humanity, his need for individual dignity, his beliefs in cooperation of men, and through cooperation, his ability to find greatness". His buildings met with disaster, but I’m sure his vision will survive.

Notes:
Minoru Yamasaki was one of the few Japanese Americans spared from evacuation during World War II because an East Coast architectural firm hired him. 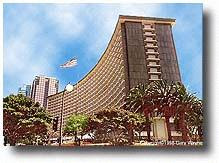 Additional Info about Minoru Yamasaki:
Towering Achievements
A Triumph of Talent
Posted by riodan at 1:25 PM No comments: 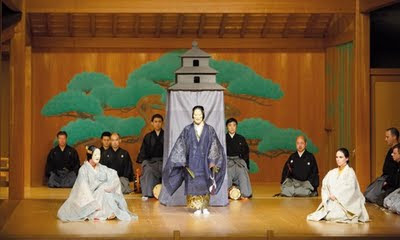 For Further Information:
Kita-School Oshima Noh-gaku Do
Noh Theaters to Present English Performance
Posted by riodan at 11:35 AM No comments: