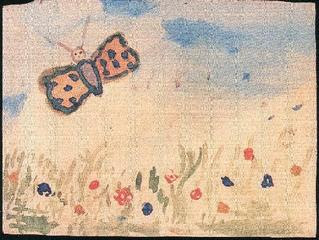 The last, the very last,
So richly, brightly, dazzlingly yellow.
Perhaps if the sun's tears would sing against a stone ...
Such, such a yellow
Is carried lightly 'way up high
It went away, I'm sure, because it wished to kiss the world good-bye.
For seven weeks I've lived in here,
Penned up inside this Ghetto.
But I have found what I love here.
The dandelions call to me
And the white chestnut branches in the court.
Only I never saw another butterfly.
The butterfly was the last one.
Butterflies don't live in here.
In the Ghetto. 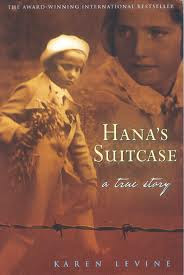 What a coincidence! I got the book The Hotel on the Corner of Bitter and Sweet as a Christmas present from my Canadian friend! Well, my book was not autographed by its author, but I liked it very much too. And, another coincidence! I watched a documentary film "Inside Hana Brady's Suitcase" (2011) by Larry Weinstein* on Czech TV a couple of days ago. It was a moving story too. Both Hana and her brother Jiri (George) came from Nove Mesto na Morave*, which is a place where I took part in my first 50K cross-country skiing race in the 1984 or may be even earlier. The town is in the Czech-Moravian highlands and about ten years ago there held cross-country skiing race which included the World Cup series.

I recently emailed to Jiri that I had read Hana Brady's Suitcase written by Karen Levin*. The book preceded by Canadian Jewish News and Karen's radio documentary on CBC Radio One that stirred worldwide sensation. As Karen penned in the introduction, the story took place on three continents over a period of 70 years - Czechoslovakia, Japan and Canada. Jiri and Hana, brother and sister, born and raised in Nove Mesto, were among thousands of Jewish children detained at Terezin* (Theresienstadt) Concentration Camp, eventually sent to Auschwitz* in the 1940s. Jiri, survived the incarceration and war, and immigrated to Toronto.

A Tokyo woman named Fumiko Ishioka*, working at a small Holocaust museum, after visiting Terezin and Auschwitz, solicited certain mementos with which she could easily demonstrate history to children. She got Hana Brady's Trunk. She found Hana and her brother after examining papers and photos and her intense pursuit started. Fumiko's close-to-obsessive chase hit the bull's eye. She succeeded in locating where Jiri lives. Fumiko sent her letter to which Jiri responded. Two parties met in March 2001, and surprised the world media.

How was this miracle possible? 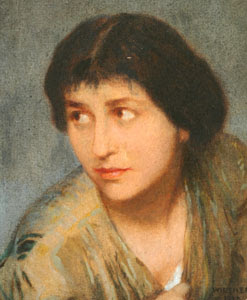 Enter Friedl Dicker-Brandeis* (1898-1944), an Austrian artist and educator, once student as well as lecturer at the famed Weimar Bauhaus.* She spent two years in Terezin Camp, along with her husband Pavel before being railroaded to Auschwitz. She gave art lessons to the children there, as a way for children to understand their emotions and environment. In her limited capacity, she was giving art therapy. She asked them to put their names on the drawings before submitting them. Apparently she stored the drawings and entrusted them to a friend. The Director of Girls House, who returned after the war, found them, so he put them into 2 suitcases and carried them to Pinkas Synagogue in the Prague. It took 10 years to have those suitcases opened and children's names were individually recognized on 4000 drawings with a dozen poems. Hana Brady's drawings were among them. The poem quoted on the top came from the same source.

Per Emma Furman, pediatrician, taught by Friedl, survived the war, "the times spent drawing with Friedl, are among the fondest memory of my life. The fact that it was Terezin made it more poignant, but it would be the same anywhere in the world. Terezin had many world specialists in every field who taught me. But I think Friedl was the only one who taught without ever asking for anything in return. She just gave of herself".

Perhaps I may be overdrawing, but my image of Friedl Dicker-Brandeis very much resembled that of Clara Breed (Dear Miss Breed)! Both women gave children strength to live, dream and hope for tomorrow in spite of adversity. They blended into one in my world of idealization.

4) Terezin (Theresienstadt in German)
65 km north of the Prague. The fortress built by Hapsburg was named after Maria Theresa. The Nazis transformed the fortress town into a transit camp through where 150,000 European Jews passed en route to extermination camps.

5) Auschwitz-Birkenau
Built as extermination camp by the Nazis. The Auschwitz State Museum displays 4 million death toll. I didn't visit Terezin nor Auschwitz on my trip to the Czech Republic. My Malaysian friend visited both and sent me the Penguin Book Auschwitz - A History by Sybille Steinbacher, 2004.

Excerpt from page 108:
A transit camp to mass extermination was the ghetto of Terezin, Jews from the protectorate of Bohemia and Moravia. What was unusual - at least temporarily - was their treatment: they were neither separated according to sex nor subjected to any selection process, and they did not have to give up their luggage; they were allowed to keep their civilian clothes, and the children were allowed to stay with the adults. They received all kinds of privileges, and only some of them were assigned to the work units. There was a school and kindergarten, housed in the barracks, and the children were allowed to paint.

6) Fumiko Ishioka
Received a Masters degree from University of Leeds, UK. Author, Director of the Holocaust Center in Tokyo and President of Anne Frank Fan Club. Received Honorary PhD in education in 2011 from York University in Toronto, Canada. Lectures in Japan and abroad on Hana Brady.

7) Bauhaus
Bauhaus was the first model of the modern art school. Founding place of the Bauhaus movement is UNESCO World Heritage city Weimar, 220 km (138 miles) southwest of Berlin. I visited the unique Bauhaus-Archiv Museum in Berlin.

8) Anne Frank (1929 -1945)
Anne's diary ended on Aug l, 1944. The family was sent to Westerbork Transit in the Netherlands and then to Auschwitz. In October 1944, Anne and her sister Margo became separated from their parents, Otto and Edith. They were all put on the last transport from Auschwitz to Bergen-Belsen (near Hanover), where both girls died of typhus, about two weeks before the camp was liberated. Edith died but Otto survived Auschwitz. 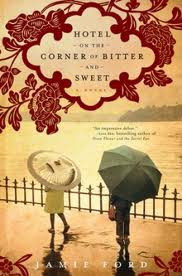 New York Times Best Seller Hotel on the Corner of Bitter and Sweet was a Christmas gift from my daughter. The author Jamie Ford autographed and wrote: "Rio, inspiration comes from life and good books. Keep writing" and an actual size "Do Not Disturb (reading)" book marker attached, jutting half an inch out of the book. My daughter wrote, "I met Jamie Ford in person at the Thousand Oaks Civic Arts Plaza. He signed the book for you and for me." About the time I finished reading it, the Japanese translation came out with the title Panama Hotel, with a picture of the hotel on the book cover. This historic hotel was built in 1910 and was the first home to most of the early immigrant Japanese.

It has been said that the Japanese arrival and formation of J-town in Seattle and Tacoma, around the early 1900s, was due to 1) The Great Northern Railway (job placement) and 2) two Pacific Ocean passenger liners, NYK (Seattle) and OSK (Tacoma). Kafu Nagai (1879-1959), a writer who landed there in 1903 on the way to the east coast, wrote that he saw the same old Japanese shops from bean-curds, bean-soup to Sushi, buckwheat noodle shops in Seattle, not much different from Tokyo. However, the day the 1942 Executive or Civilian Exclusion Order took effect, there were 8000 Japanese American evacuees detained at the Puyallup Detention Center (Camp Harmony), and the thriving J-town collapsed and was gone, except for the Panama Hotel. It is currently owned by Jan Johnson (see photo). Johnson renovated the hotel and made it a B&B (bed and breakfast) and a tea & coffee house. She was honored in 2009 by the Japanese Seattle Consul General for her endeavor to restore the century old building for historical and educational purposes.

Jamie Ford's book is fiction. The story is about Henry Lee, an immigrant Chinese who met Keiko Okabe, an immigrant Japanese, living in the same neighborhood (now called the International District). They were also fellow classmates at Rainier School among the dominating white students. They worked as school kitchen helpers and fostered a friendship and platonic love.

A major problem was that Henry's father literally hated Imperial Japan and Japanese as Chiang Kai Shek's foe and there was no way he was going to meet Keiko and her family. Keiko's family photos, entrusted with Henry, was found by Henry's father and thrown outside. Father even planned to send Henry back to China to sever relations with Keiko. He soon suffered from a cerebral stroke, which rendered him unable to talk. He never accepted anything pro-Japanese and impeded the exchange of letters that eventually resulted in separation soon after Henry's visit to Minidoka Camp in Idaho.

What could teenager Henry do without his family's understanding of Keiko's departure? Mrs. Beatty, Rainier school teacher, came to his rescue. Just like the school kitchen, Mrs. Beatty offered Henry a temporary summer job and transportation, to work for her as kitchen help at Puyallup. Henry succeeded in a reunion with not only Keiko, but Keiko's family, too.

Next, what is the significance of Minidoka, Idaho? Henry asked their mutual friend and sax player Sheldon Thomas to accompany him as a chaperone. Sheldon's jazz recordings bound Henry and Keiko. Sheldon and Henry first took a Greyhound bus to Wala Wala, Washington, then another bus to Jerome, Idaho through Twin Falls. They were surprised upon arrival by a giant sign "18 miles (29km)" to War Relocation Center Minidoka, and luckily were offered a truck ride by the local Adventists, among the religious volunteers. Hurray!

Personally speaking, Raymond, my son-in-law and I drove, in the summer of 2009, over 300 miles (700km) through the state of Idaho, from the Continental Divide Targhee Pass (the northeastern corner of the state, over 2000 meters above sea level) to Boise. We were returning from Yellowstone National Park to Boise Airport to return our rented car. We dropped by on the way to visit Moon Crater National Park, located in central Idaho and my wild fancy was that Minidoka would be as barren as Crater Park.

I was relieved somewhat, reading Jamie Ford's book, that the actual camp was closer to Twin Falls, further south of Idaho Falls, about 140 miles (220km) along the Snake River Plain. I saw a photo of the old Minidoka visitation building, and I recognized water that was called a canal.

There was the building where Henry waited for almost half a day to meet Keiko. Henry finally accomplished this difficult trip at a tender age of 13! The story comes to an end when widower Henry and widowed Keiko meet in New York in 1986 all afresh, when Henry's son Marty and his fiancee Samantha made arrangements after the couple discovered Keiko's sketchbook among the unclaimed boxes, crates, and trunks of the 1942 evacuees' personal effects, buried and forgotten in the basement of the Panama Hotel. Keiko's sketchbook contained a portrait of young Henry. Hurray, again!