"I traveled among unknown men,
In hands beyond the sea;
Nor, England! Did I know till then
What love I bore to thee"
(from the "Borderers" by William Wordsworth) 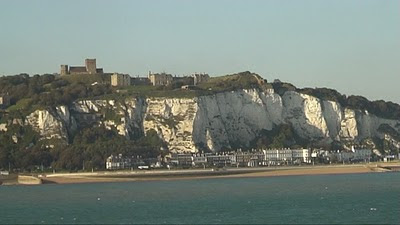 Professor Kohmoto's (1911-1986) Outline of English Literature begins with a beautiful portrayal of the white cliffs of Dover that drew irresistible attention from the opposite shore, and eventually invited Roman invasion into the 'Albion'. As a student, I was fascinated when I listened to his lecture in the early 1950's and dreamt that someday I would be there. I was not alone. Like minds think alike. Classmate Hideo Iwasaki reported that he finally made a visit to the Isle of Skye last summer (2009). It took him 50 years to accomplish it. I stood at Dover in the springtime of 1998, a bit younger than he was. I walked to the point of the pier to look back at the shore, past the anchored Channel Ferries. I recognized some white spots with the rising sun, but I knew I had to sail further north to see the bona fide Albion (white cliffs). Today, the Eurotunnel, or the Chunnel is recognized as one of the 7 wonders of the Modern World, boasting the longest tunnel 40 kilometers or 24 miles, which surfaces at Dover on the UK-side. 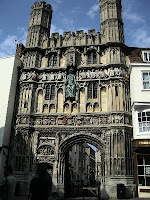 My second stop was Canterbury Cathedral in Kent. After Archbishop Thomas Becket was murdered in 1170, pilgrims from all parts of Christendom came to visit his shrine. This pilgrimage provided the framework for Geoffrey Chaucer's (1343-1400) 14th Century collection of stories, The Canterbury Tales, written predominantly in rhyming couplets. After serving as comptroller of customs, and traveling often to Europe himself, Chaucer finally started work on this great poem anthology, which sadly remained unfinished. A company of pilgrim travelers with a variety of professions (knight, friar, merchant, miller, etc.) and rank competed in their story-telling contests at roadway taverns. One of them, "The Wife of Bath's Tale", eventually led me toward the City of Bath. 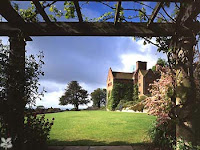 While still in Kent, I had two choices for my next stop. Which house to visit - Charles Darwin's (1809-1882) or Sir Winston Churchill's (1874-1965)? Darwin's house is in Downy and Churchill's is in Chartwell, near Sevenoaks, which meant traveling by train was not so easy. I only read the abstract of Darwin's Voyage of The Beagle (1839) but I have completed Churchill's History of WWII in six volumes. That settled the short debate. I stayed at the nearby middle-aged couple's room and board house overnight that proved to be a pleasant breather away from the busy streets. The husband directed me to Churchill's house in the morning after a beautiful breakfast. Churchill moved to Chartwell in the 1920's and spent much of his retirement years there until his death. Here, he drew inspiration for his writings and paintings. He said "Beauty is to Art, as Honesty is to Honour." He was awarded the Nobel Prize in l953. The estate is huge, commanding a magnificent view over Kent and Sussex with a lake in front and Lady Churchill's rose garden. It is now managed by the National Trust.
Posted by riodan at 12:50 PM No comments: 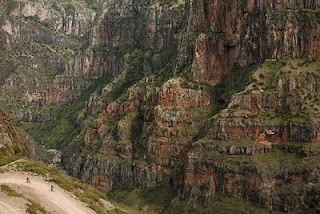 While residing in San Diego, I befriended a Nisei Japanese American who lived in Los Angeles, but was born in Imperial County, the easternmost part of California that faces Arizona. He was very familiar not only with De Anza Borrego Springs, Ocotillo Wells, but also Sonora, Chihuahua, States of Mexico. He said he owned a piece of land in New Mexico near the famous 650 ft (200 meter) “Gorge Bridge” crossing the Rio Grande, not far from Taos (the Pueblo Indian village with Hispanic and Latino influences). His dream is to build his house there that is completely solar-powered and I sent him my employer’s catalogs of photovoltaic products. I envied his ability to speak excellent Spanish.

In 1981, when spring brought the flowering season to Borrego Springs, he invited me to join him on a visit to Copper Canyon in Chihuahua, Mexico. I had heard about the canyon, known as the Grand Canyon of Mexico and I jumped at the chance. He rode a train from Los Angeles and I was to join him at Mexicali Station. On Friday evening, I parked my car inside Calexico (U.S.) and walked to the border through customs to Mexicali and waited for the train. A couple of days before our departure, there was an earthquake near El Centro, in a town called Westmorland, and I saw damaged brick fences on both sides of the border.

I met my Nisei friend without incident and he introduced me to a few passengers with him. Since the train was not on a regular schedule, it took a while before we left Mexicali. To my disappointment, I was not able to take day- time photos of Cerro Prieto Geothermal plants when we passed it. The train ran by the well lit electric plant complex with lots of steam rising from it. It is built directly on the Baja California fault. It is one of the most studied geothermal field in the world. I had a special tour invitation from San Diego Gas & Electric, which ran it as a joint venture with Mexico since the 1970‘s. I could not make the tour, but I’m glad I had at least a glimpse of the shoreline site, about 20 kilometers south of Mexicali.

When we woke up the following morning we were at the Los Mochis Station, about 1000 kilometers (600 miles) south of the Mexican Border, the gateway station to go up the rugged Sierra Tarahumara. For the next 600 kilometers we would hug the sides of Copper Canyon along the River Septentrion, zig-zagging and tunneling through the mountains. Los Mochis is noted for sugar plantations. The name means the place of the land turtle, a Tarahumara Indian word. We were stopped here for a little while and we learned that two local young Mexicans were hired as cooks. My friends and I welcomed the news as we both like Mexican dishes. There was an announcement that passengers were to take turns going into the dining car after relaying information about the Saturday and Sunday jaunts. 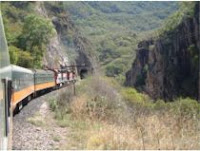 It was a very scenic journey, except for the soot coming from the front locomotive. Divisadero was our destination. Upon our arrival, we were taken to the viewpoint to see the Canyon 1,760 meters deep and Rio Urique. Honestly speaking, I liked Grand Canyon better than Copper Canyon. Probably the color made the big difference. Before dark, our group checked in to a warm cottage with hot showers and had a good sleep after a Mexican fiesta, a lot of cervesas and guitar music.

Sunday morning we started the day by visiting caves of the Tarahumara Indians. We had seen some Indians selling their handicrafts in the town of Creel and at the Divisadero Station. These Indians had a reputation of being excellent long distance runners, as good as the Tarascan Indians to the south.

I had a chance to hear Victor Villasenor, a Mexican-American writer, speak. He lives in North County San Diego. He wrote “Rain of Gold” and “Walking Stars” both of which I want to translate into Japanese someday. "Rain of Gold" is the story of three generations of the author's family migrating from revolutionary Mexico in the 20th century to California. It is a really thick book and an excellent read. I suspect his family covered some of the same ground I passed through. I want to relate here one of his stories, “Toreando el Tren” or “Bullfighting the Train", which is full of the Tarahumaran spirit.

In the story, the family of Juan (Victor’s grandfather) was among the migrants on the train heading north. At one of the stations where their train had stopped, the boys gathered to bet on the train bullfighting game. They were to chase the train after it has started down the tracks. The most confident runner waits longer than the others before starting to chase the train. The object of the game is for the confident runner to catch the moving train. Well, Juan was the "confident" runner, but he did not catch the train. He ended up chasing the train alone in the hot desert, running on the tracks for two-days with burning feet, even fending off a mountain lion attack. Luckily, he finally caught up to see his family at the next stop. 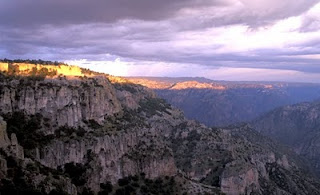 Posted by riodan at 1:59 PM No comments: