My past job involvement with Lake Tahoe in the U.S. led to my interest in Lake Biwa. My studies started with the vital lake data comparison as follows: 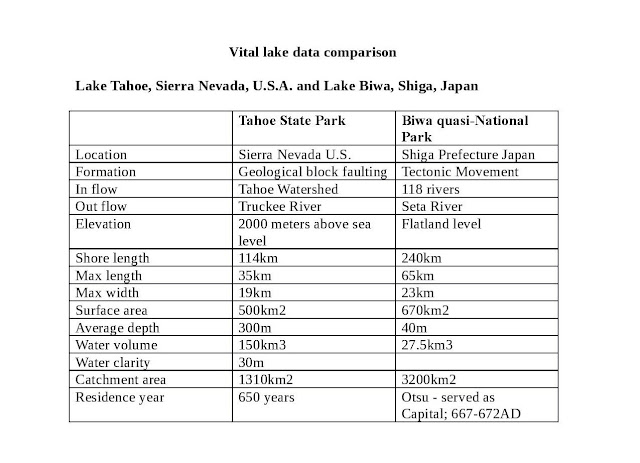 Comparisons of the two lakes, Biwa and Tahoe are just for my personal information. However, as I proceeded, I'm pleased to find evidence of some resemblance and commonality between the two.  Tahoe was inhabited by the native Indian tribe Washo.  Legend has it that the tribe was led by a coyote (guide) to Lake Tahoe by a divine oracle; that the plants, medicines and animals of this area grow strong in order to provide nourishment for the Washo tribe whose responsibility was to take care of it.  Summers were mild, but in harsh winters, the tribe had to travel down to the lower valleys, gathering pine nuts and acorns.  I've read that the people of Jomon and Yaiyoi periods (Iron Age) in ancient Biwa Lake spent summers fishing the lake, but seemed to prefer living in the rural landscape for gathering nuts/acorns, as evidenced in the archeological excavations from the shell mounds in the Biwa Lake basin.  The silts of nuts and acorns were discovered along with shell heap. Biwa Lake occupied my concerns as one young Osakan who shared the benefits of Biwako water.   I spent the 1950s in Osaka as a student.  It was a real shock to read an interview of Masayoshi Takemura, who served as the Governor of Shiga Prefecture (1974-1982), and later on as the Hosokawa Cabinet Secretary and Finance Minister.  He was questioned by the press around 1990: how long will Biwa Lake hold out after its first eutrophication was reported in the 1980s.  His reply was "about 30 years more or less".  I returned to Japan in the mid-1990s after my retirement and 20 years has elapsed since.  If I literally believe his prediction, only 10 years is left.  Is there any way that the lake could outlive his prediction?  I felt impatient. 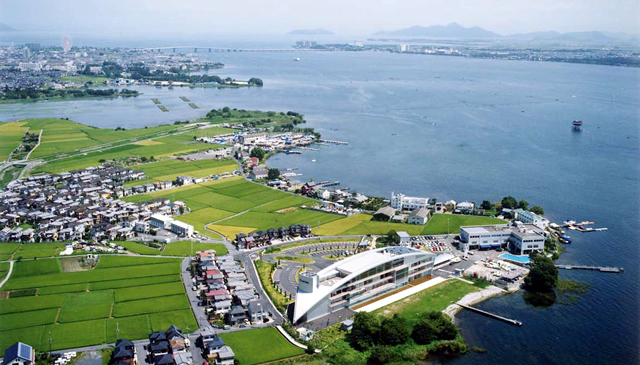 I decided to go see Biwa Lake.  Biwa Lake Museum is located in Karasuma Peninsula in Kusatsu City, closer to Biwa Lake Toll Bridge connecting Otsu and Moriyama, a bit inconvenient to be dependent on the Kusatsu bus to and from Kusatsu JR station.  I took a taxi (6.6 km) from the station.  I had about an hour before the Museum opened.  It was Sunday morning and quiet.  I headed for the lake front and saw a tremendous number of parked cars and men fishing in silence at intervals around the lake.  Also saw a few inflatable rubber boats afloat on the lake.  A good sign that the lake is alive!  I felt happy. Biwa Lake was designated as a quasi National Park in 1950 and Ramsar Site in 1993.  It was in 1996 that Shiga Prefecture built the Biwa Lake Museum for environmental education of the lake that occupies 16% of the prefectural land.  More than  100 rivers from the surrounding prefectures flow into the lake, but only one river flows out - Seta River in Shiga, then Uji River (Kyoto) and finally Yodo River (Osaka), which discharges into Osaka Bay.  Kyoto has been connected to Biwa Lke through Lake Biwa Canal built for multiple purposes in the late 1800s.  Kyoto and Osaka are two megalopolis' sharing the water supply from Biwa Lake.  Today Biwa Lake management is under the Ministry of Land, Infrastructure, Transport & Tourism called 'Water Resources Agency' (WRA) whose mission is stated as "to provide safe, good-quality water stably and reasonably for the people".

At the Museum.  I was dumbfounded at the exhibition concerning natural history.  Human life - 100 years at most, Civilization - 1,000 years to formulate, Human Evolution, Evolution of Life, Geological timescales - beyond 100,000 years -!  Felt like seeing the Cosmological Calendar - HOW INSIGNIFICANT WE HUMANS ARE!  There were great displays of excavated sediments from the ground where the museum stands.  Among the sedimentary strata were deposits of volcanic ash from Kyushu, corresponding to 1.8 million years ago. Going back to Jurassic Days!

My visit to Biwa Lake alleviated my immediate concerns.  I felt a little at ease and renewed my conviction along the religious philosophy advocated by Rev. Chodo Mitsunaga of Temple Isaki, Omi-Hachiman, Shiga, who had completed harsh ascetic training at Mt. Hiei, requiring a 7-year mountain circuit.  He states, "Talking about Biwako is meaningless.  Mountains and rivers set their own rules.  You have to start from there."  Rich oceans and lakes come from the rich mountains and forests.  My thoughts are that this is related to the Washo Indian teachings at Lake Tahoe.

Posted by riodan at 1:33 PM No comments: