Japan, District 76 was honored with a visit from Pat Johnson, a few months after she assumed her position as International President. This is unprecedented in my 15 year Toastmasters career to see and listen to such a high level Toastmaster's official in Japan in person and, in particular, just a few hours travel from where I live. It was a once in a lifetime experience and it was most rewarding.

Pat's speech was adeptly titled "You Raise Me Up" and she beautifully sang and charmed the hearts of all the participants, right from the beginning:

The song, I remembered, was sung at the Super Bowl in 2004 in Houston Texas, to honor the one year anniversary of the NASA Shuttle Columbia disaster. The Japanese, in particular, can mostly remember the song as it was used by their native daughter skater Shizuka Arakawa as the background music in her relentless road to Olympic championship. Why Shizuka chose it? I surmise she sensed an inspiration and compassion in its Irish rhythm and tunes quite intimate and familiar to her and all the Japanese people.

The lyricist is Brendan Graham (1945 - ) born in the County of Tipperary. He is also the author of The Whitest Flower (1998), The Element of Fire (2001) and The Brightest Day, The Darkest Night (2004). I haven't read any of them yet, but a search on Google reveals they are Irish epics that document the stories of surviving women since the days of the great famine in Ireland, leaving Ireland for Australia, Canada and the U.S. for a better life. Brendan admitted that the song embodied the feeling of all the novels.

I learned also from the official web site for "You Raise Me Up" that the song persisted, had a life of its own. It was composed by Rolf Lovland of northern Norway and performed by Fionnuala Sherry, an Irish violinist - the duo that make up the Secret Garden. It was a miracle similar to that of the beautiful song Amazing Grace. It's now sung and played everywhere throughout the world from the London Community Gospel to an African children choir.

Economically and geopolitically, Japan has been in a downward trend for two decades among the neighboring powers. Like Ireland, we desperately need decisive turnaround with positive will power and encouragement and help from worldwide friends.

Pat Johnson inspired Japanese Toastmasters with a magic to go all out
for it. Thank you, President, for sharing your wonderful message with us, bringing much pride in ourselves for our practice of being dedicated Toastmasters.
Posted by riodan at 2:08 PM No comments:

One of three tropical/subtropical tree flowers is the jacaranda, which should be in full bloom right now in the southern hemisphere. I visited Grafton, Queensland, Australia, a little above south latitude of 30 degrees during the hilarious Jacaranda Week. Rows of jacaranda trees, specifically on Pound Street, has an imposing grandeur. The jacaranda float procession lasts over a few hours, smaller but quite beautiful than what I've seen in the U.S., like the St. Patrick's Day Parade in New York City, New Year's Rose Parade in Pasadena, or the Cinco de Mayo Parade in San Diego. The festival starts with the jacaranda queen, followed by the princess beauty competitions and ending with the crowning ceremony.

The various local arts and crafts group exhibitions are held throughout the week. I traveled down the Mighty Clarence River to the Pacific Ocean and the beach. Thanks to the foresight of the city founders well over a century ago, Grafton is blessed with more than 6500 trees providing shade and 24 carefully maintained, beautiful parks, which is adjacent to the Clock Tower ornament, a great spot for lunch and the focus of many jacaranda activities.

Back in Japan in the mid 1990s, I met my neighboring couple who returned from the Democratic Republic of Congo, Africa. They were in the mining business and spent some years in Lubumbashi, formerly called Elizabethville, a town bordering Zambia. I found the location is a little below south latitude of 10 degrees but the couple mentioned how they miss the purple hills veiled in purple mist of jacaranda flowers. I learned the city of Lubumbashi is a highland between 1000 to 2000 meters and that explains the tree acclimatization. 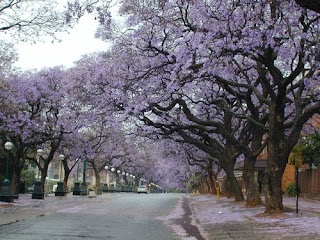 Now another friend of mine, after his visit with his son who had been stationed in Pretoria, South Africa, told me that the city of Pretoria is familiarly known as Jacaranda City. I found Pretoria is just in between south latitude of 20 and 30 degrees, about the same latitude as Grafton, Australia. However, the jacaranda was not native to Pretoria; several horticulturalists, since the late 1800s, imported the trees from Brazil and Australia to Cape Town, Sunnyside, Groenkloof and Pretoria and in due course, jacaranda became so popular and were extensively planted that Pretoria, in particular, became known as the jacaranda city. As a matter of fact, about 50,000 jacaranda trees were reported lined inside the 250 miles of streets in and around Pretoria in the official guidebook. Probably a similar thing happened with jacarandas in Lumumbashi. The tree is regarded as an invader tree, as it grows in poor soil, and is drought tolerant.

Nelson Mandela, Nobel Laureate and ex-President of South Africa, referred to the jacaranda tree in his inaugural speech:

"To my compatriots, I have no hesitation in saying that each one of us is as intimately attached to the soil of this beautiful country as are the famous jacaranda trees of Pretoria and the mimosa trees of the bushveld. Each time one of us touches the soil of this land, we feel a sense of personal renewal. The national mood changes as the seasons change. We are moved by a sense of joy and exhilaration when the grass turns green and the flowers bloom..." 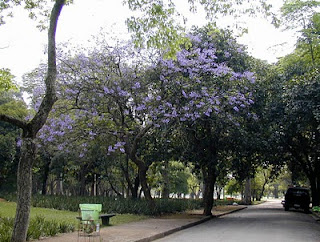 My Brazilian friend sent me his jacaranda photos from the famous Ibirapuera City Park of Sao Paulo, Brazil, where the jacaranda tree originated. In the northern hemisphere, I'm pleased to list many places of jacaranda cities along the north 30 degree latitude, starting with Mexico, California, Florida, Mediterranean coast cities, Egypt, India, Bhutan, …, etc. It is in the month of May they blossom, instead of November. My memories of Cuernavaca, Mexico and Okinawa, Japan are still vivid with jacaranda purple and the burning flam trees and spathodea, two other great tropical trees.
Posted by riodan at 2:18 PM No comments:

TBS reinvigorated its 50 year commemorative TV program campaign of "Love of 99 Years - Japanese Americans" on Wednesday night, Nov 3. It opened with a write-in forum for those people showing interest and I saw 40 pages of write-ins in a day or two by the impatient fans saying they couldn't wait to see the star "Tsuyoshi Kusanagi" who takes on the dual roles of Issei immigrant Chokichi and his son Ichiro.

Kusangai, 36 years old, is an actor, singer and a member of the popular Japanese idol group, SMAP. He had a foolish act last year under the influence of alcohol that lead to a police arrest and showed his penitence for a short time. Probably it was a good opportunity to show who he is, as the part was written specifically with him in mind by Sugako Hashida, the screen writer.

Here's what Kusanagi told an interviewer that appeared in the paper.

"Chokichi, the father, picks up and holds his newly born baby Ichiro in his arms. I had a strange and mixed feeling that I have to play gown-up Ichiro."

The shooting location was in the U.S. He said it was a tight and hard itinerary, starting work as the sun rose and filming as much as possible during daylight.

"One time, a hurricane was approaching. We had to run to a shelter as soon as the director yelled 'cut'. I actually engaged in farm labor and participated in military drills when in the story, I was drafted into the army. I gained a lot of muscle by the time I returned to Japan. I think I learned about the relentless spirit of immigrants, their strong family bond and their aspiration for peace. It really changed the way I look at life.”
Posted by riodan at 1:42 PM No comments: