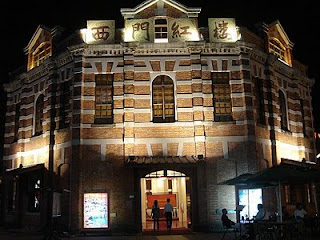 When you surface from the Taiwan subway at Ximen Station, you catch a glimpse across the busy intersection of people and car traffic of a chic and stodgy brick building. Modestly illuminated at night, it invited our inquisitive attention and we walked in to see what was inside.

Ximen is compared and likened to Shinjuku or Harajuku in Tokyo where young people visit boutique shops, cafes and restaurants. It's a place I felt nostalgia and I see why. It was a Japanese town before World War II. The historic temple Lonshanshi is close, where the area named Ban-kah, the name of the dugout canoes still kept, but in different Chinese characters "Wanhua" (pronounced Manka in Japanese).

Michelle Chen, our guide of the night, told us that this Hong Lou Theater was occupied by Guomindang soldiers. The building, decayed and neglected for a long time was restored recently as one of the historic buildings designated by the country. The brochure we picked up explained that it was built originally as a public health station, but later became the Taipei City Market, which thrived as an abundant commodity supply center. It became a show window of Taipei commerce and distribution, and the Japanese government officials used to pay a visit to observe how things were going down there.

Aptly nicknamed Octagon Hall because of its shape, the concept was reportedly from the art of divination, I Ching (Book Of Changes). The area was a kind of marsh where dead bodies were found on the roads. So, many prayers are placed in the octagonal design.

The architect was a man named Jyuro Kondo, one of the famous Japanese quartet, who worked at the Building and Repair Section of the Colonial Government. The four architects were Nagano, Moriyama, Ide and Kondo. Nagano was responsible for today's Presidential Office, Moriyama for today's Audit Office, and Ide for the Judicial Office and Educational Hall, the latter is still being used for all kinds of Musical events near the Ximen subway station as Zhongshan Hall. Kondo was responsible also for the old hospital of Taipei Imperial University. The Taiwanese probably had mixed feelings when they dealt with the Japanese architecture from the colonial days. It was just during the past 10 years that the Taiwan Government authorized the designation of those building as historical buildings and funded their restoration efforts.

Zhongshan Hall designed by Ide
A common style shared between the four architects are Gothic or baroque design, accents of grandeur and combined use of red bricks and white stones for horizontal belts. All these elements of style were apparently influenced by an architect named Kingo Tatsuno, their teacher at the University of Tokyo, whose representative work is the Tokyo Station Building.

Currently, the first floor of the Hong Lou Theater houses not only a cafe but also a place where traditional toys, artifacts, and photographs are exhibited and sold. The second floor is an open theater with a big stage / screen, used for small concerts, operas, and perhaps movies. We dropped into the theater a couple of times on the way to and from Heroes Hotel where we stayed. The hotel is within walking distance from this Ximen Market.

I searched the Internet for more information about Jyuro Kondo. He returned to Japan from Taiwan and opened an architectural firm. He built one hospital, called Do-Ai Hospital, in Sumida Ward. However, it was demolished 15 years ago. He must have consumed all his energy in Taiwan and had little left upon his return.
Posted by riodan at 3:04 PM No comments: 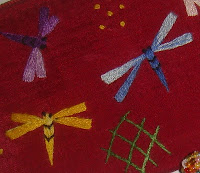 Lead by Sherry Li's baton, I had the honor to sing the “Akatonbo” song in Japanese and Chinese with the two dozen members of the Taiwan Toastmasters Chorus group at the welcoming reception of the D67 Fall Convention Dinner before an audience of one thousand. Sherry wrote that she chose “Akatonbo” simply because of its beautiful melody. “Akatonbo” is also a song about a dear childhood relationship. It can be seen as a metaphor to describe the connections between Taiwan and Japan. “Akatonbo” has many versions of translations in Chinese, but I like the one picked by Sherry. It was equally beautiful even in Chinese to wonder which came first as the original.

It goes as follows:

This drove me to look into the history about how the song came to be written - researching further on what I wrote in a previous entry that referred to the poet Rofu Miki (1889-1964) and composer Kosaku Yamada (1886-1965).

Yamada composed 76 songs for Miki, of which, “Nobara” (wild rose) came in the 1910s and “Akatonbo” came in the l920s. Yamada was in Germany from 1910 to 1913 and his “Butterfly" song melody was from a Spanish ballad. Yamada composed for another famous poet, Hakushu Kitahara (1885-1942) after Miki, producing beautiful “Karatachi no Hana” (trifoliate orange tree) and “Konomichi” (I remember this road ). Yamada composed also many school songs for universities and high schools. I noticed he composed one for Taipei Third Junior High.

Yamada's life was under a cloud upon his return from Germany. He went to the Shonan (near Kamakura) area, and commuted to Tokyo by train. It is reported that he composed "Akatonbo" while commuting between Shonan and Tokyo. As Franz Shubert (1797-1828) said, "Grief and misforturne is the mother of fine music." Common between Yamada and Miki was the influence of Christianity. Yamada's father was a minister and his brother-in-law was Edward Gauntlet (1868-1965), also a minister and educator. Yamada was raised at home listening to hymns. Miki became an ardent Christian as a teacher in the Trappist Monastery in Hokkaido. His “Akatonbo” poem was composed there in 1921.

Rofu was an ill-fated person separated from his mother at the age of seven. According to his autobiography, one morning he went to school after being sent off by his mother, but when he returned home, she was gone. He was not told in detail why his mother had left. But she was apparently grieving about her separation from her son. It is easy to imagine how deep Rofu's grief was. Since that day, Rofu was brought up by his grandfather.

The name of the poem is “Akatonbo”, but the poem is filled with his deep affection directed toward his mother. Noriko Wada, author of the "Akatonbo Scenery" analyzes the poem by sections and the poet's age. Rofu was 1-2 years old as he was on the back of mother (first paragraph). 3-5 year old Rofu is picking mulberries in the backyard (second paragraph). Around 10 years old Rofu's maid (nanny) left the house to marry (third paragraph). Another abandonment. Of course, he loved his maid but it did not compare to his affection for his mother. Rofu had to be mentally strong and independent.

Rofu in Hokkaido watching an Akatonbo at the end of the pole and reminiscing his hometown. Noriko Wada pointed out that there was a minute change between the first version and the second and final version of “Akatonbo” within a period of 3-4 months. The word Akatonbo appeared in the first paragraph, instead of the mountain, a very delicate change, but important, as per Noriko Wada.

In Taiwan, “Akatonbo” was immediately followed by “Amazing Grace” by coincidence, but to me, it was the most wonderful pairing that Sherry picked out. 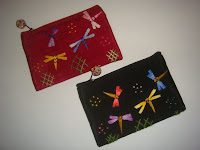 Posted by riodan at 2:18 PM No comments:

This entry is dedicated to the D67 Toastmasters choir, especially to the wonderful women singer group.

I heard the D67 chorus repertoire which included "Ode to Joy", "O Sole Mio", "Do You Hear Me", "Fireflies", etc. We just envied their enthusiasm and dedication. It reflected the success of the 2008 Joint Anniversary Party of Kumamoto Toastmasters Club’s 20th and Success Toastmasters Club’s 10th anniversary in October, which featured a three part "Ode to Joy" sung in German, Taiwanese, and Japanese (alto by Lydia and Sherry, and tenor Masaki Oshiumi - my fellow Toastmaster of Kitakyushu). Last year I was unable to make it.

It was my adventitious challenge to jump into the chorus without proper rehearsal and training. It was one of the entertainment programs for the dinner show for fellow Taiwan Toastmasters and I had belittled thinking that all the performers were amateurs. I had to admit that my mind set was all wrong. They were all well trained for the day and they had met, I'm sure, a number of times for intense rehearsals. I committed an intrusion as an enthusiastic amateur.

I knew I had to sing "Akatombo" (red dragonfly) in Japanese and Chinese. Sherry sent me and Masaki Chinese songs in MP3 to practice. Then another song was added: "Amazing Grace" - a hymn in English, Chinese and Japanese. I am not a Christian. Why should I have to sing it? Listening to the MP3 sent along by Sherry, I almost gave up. It was so high toned that I could not reach the required voice range. A good excuse. I e-mailed Sherry that I would pass on the "Amazing Grace" song. Sherry, however, assured me that I would go into the bass group and I should love singing in the male section. I tried desperately to convince her, but I knew her answer beforehand. I found later that Masaki visited a Baptist church in Kitakyushu and the pastor strongly recommended "Amazing Grace". It was not Sherry's selection.

Admiringly, Sherry has a special knack to train singers hard but never offensively. I like her rigorous way and style of production. I forgot about time passing and it was almost 11 o'clock when we returned to the hotel. I slept like a log. 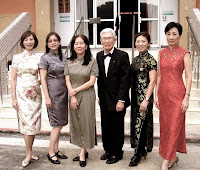 The following day was our first stage performance. We were taken to the southern mountain range of Taipei, close to Wulai resort and we sang Akatombo and Amazing Grace for the Birthday Party of centenarians at the Northern Nursing Home in Shintien City. We had a few men on this occasion and it was a good dry run for the official choir on the following day's ritual performance. Sherry was busy with another dancing program. We neglected to ask how we did. I'm still not sure if I like "Amazing Grace". It was after the second performance of singing "Amazing Grace" among the 10 men Toastmasters singers at Yanmingshan, including George Yen, Erick Suen, Ron Chen, Bill Wan, Frank Yeh and Edward Chen that I finally decided that I love it! Thank you, Sherry, for your patience and thank you, to our great accompanists, DTM Helen Chen and Yi-hua Li, for playing violin and piano respectively at Yanmingshan. 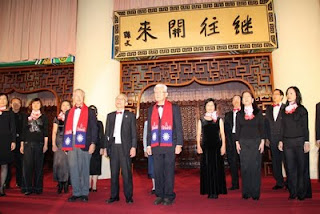