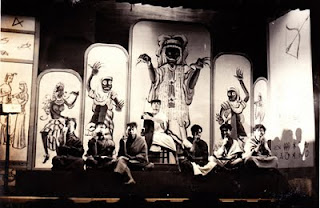 ”There has been a comet come near to the earth of late and the earth has been parched and sultry so that the gods are drowsy and all those things that are divine in man, such as benevolence, drunkenness, extravagance, and song, have faded and died and have not been replenished by the gods.”

- from The Gods of the Mountain by Lord Dunsany

“Popcorn, 15 cents!” My son was rehearsing proudly his play script with all his might. It was his first stage appearance at a kindergarten in Forest Hills, New York. It was just a few months after his arrival in the U.S. He was unable to express himself fully yet but he was thrilled that he got a part in the play and was very proud. My involvement in school acting came much later in youth than my son. During World War II, there were almost no arts related extra-curricular activities. Prevailing then were martial arts, such as Japanese Kendo or Judo. I practiced Kendo and have participated in the intra-city competition, boys section. There were no school classes when the war was going on. We were either in the rice paddies irrigating or harvesting, or in the factory as worker trainees.

The university I attended held an annual Art Festival day, when 20+ Language Departments each performed plays in their respective language of study. Usually juniors get the assignment, since seniors were too busy getting ready for job placement interviews. For some reason, our class got assigned two years in a row both as juniors and seniors. I found an old album with photos from the two plays we performed.

The first was The Gods of the Mountain, the other, Golden Doom, both written by the same Anglo-Irish romance author, Lord Dunsany (1878-1957). I asked recently one of my classmates why he picked Dunsany. His answer was to the point. Our class had no woman. He went to the SCAP (Supreme Commander of the Allied Powers) Library for the search. Dunsany’s plays were perfect under the circumstances. The parts for The Gods of the Mountain required an all males cast.

On both plays, I was lucky to play key roles - Agmar, the old beggar, in The Gods of the Mountain that has three acts, and the chamberlain serving the Babylonian King, in the shorter play Golden Doom. 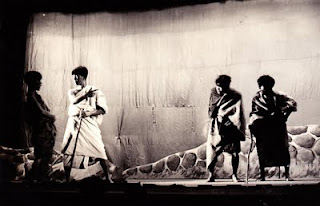 Agmar, per author Dunsany, is an ‘imperious’ but cunning strategist. Organizing a bandit of beggars, he marched into the city of Kongros disguised as a deity, modeled after the seven gods of Mt. Marma in green raiment. Each beggar flashed a piece of green garment underneath his rags and was treated with more hospitality than expected, even being offered a valuable Woldery wine. Fearing suspicious eyes of citizens, Agmar never touched the food and spilled the special wine while being served, but began devouring voraciously after the citizens left. Their trickery was short-lived. The Marma gods struck them down and turned all seven beggars into stone and left. The people found the stone figures and became convinced they were true gods all along. The story could be both a tragedy and a comedy.

On the other hand, Golden Doom is a comedy. The King and his entourage are whooping it up around an innocent scribbling of a poem by a child by the guarded King’s door while the guards have an unauthorized break for the bash. The cause of trouble is that the boy claims the scribbling was written with a lump of gold found in the river Gyshon. The King and the chamberlain find the scribbling and send for a prophet to decipher. The country is doomed, says the Chief Prophet, and recommends to the King to make a sacrifice to the stars that envy the King’s pride. The King seems so humble and has never displayed hubris.

“I inherited a rocky land, and windy, ill-nurtured, and nursed it to prosperity by years of peace and spread it’s boundaries by years of war. I have brought harvests up out of barren acres and given good laws into naughty towns, and my people are happy, and lo! the stars are angry.”

I haven't acted ever since.

In retrospect, acting in Dunsany’s plays was almost like being in a Japanese Noh play. I had to wear archaic English and classic robes. I did not discover Noh until much later in my mid-thirties.
Posted by riodan at 5:33 AM 1 comment:

Labels: Golden Doom, Lord Dunsany, The Gods of the Mountain 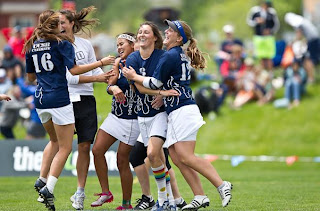 There’s a joke in Japan “entrust your son or daughter, or grandson or granddaughter if you want to be Number l in anything in Japan or worldwide.” I lived to see the joke coming true, to my very happy surprise. I shouted, “Banzai! Banzai” (Hurray, Hurray)! She did it.

This Memorial Day weekend in May brought me fantastic news that my granddaughter’s Ultimate Frisbee team won the U.S./Canada Ultimate Championship in Boulder, Colorado. My daughter traveled there from California with a group of parents who rooted for their daughters and witnessed the moment of victory and domination over the 20 discreet women’s teams, including Michigan, Stanford, North Carolina - Wilmington, Ottawa, Washington, etc. Colorado was chosen as the central location of the U.S./Canada for the meet.

I have traveled to Coors in Golden and the National Bureau of Standards in Boulder, Colorado. Had I known there was going to be a tournament with my granddaughter, I would have been there at any cost.

Although my wife and I now live in Japan, we often visit my daughter’s family, and were able to watch my granddaughter Alina’s growth in athletic competitions. In her high school days, my Alina was a cross-country runner, and I saw her compete in the high school league events in various places in California. I also saw her compete in track and field.

We were thrilled when Alina was accepted by many University of California affiliated Universities: Berkeley, Los Angeles, Santa Barbara, San Diego, and Irvine. It was a tough decision for Alina to choose Santa Barbara, as it is the closest one to her home, but its chemical engineering department is one of the best programs in the nation. I thought she might drop long distance running and concentrate on her studies.

During our last trip to San Diego in 2009, Alina invited my wife and I to observe her frisbee game competitions for two-days at the UCSD campus field in La Jolla. It was our first experience to see the kind of game in which she was involved, and we learned the game basics, glossaries, simple dos and don’ts. One of the impressive codes is self-refereeing and the spirit of the game. No referees are around and each player (7 players on the field) are bound with a high ethical conduct of self-judging.

Frisbee itself has existed since the 1940’s. People say Yale students started it all by throwing pie trays from the bakeries. 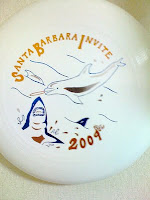 Widespread these days are canine disc competitions, but humans were first establishing the “ultimate” form of sports, with a lot of running, requiring physical stamina like a tri-athalon athlete, plus aerodynamic throw & catch techniques, as well as strategic planning and tactics. It is more brains than brawn.

The name of the Alina’s team is the Burning Skirts and we liked the girl’s end of the game cheer and chanting to keep up morale and team spirit.

Alina gave us a souvenir frisbee disc of which she designed the graphics: a picture of a twirling dolphin, with a frisbee on its nose, and a shark gasping with his jaws wide open. This now hangs on our bedroom wall. 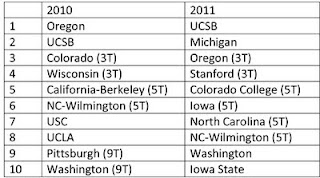 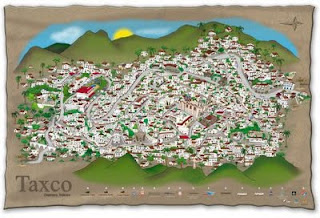 The silver route runs both north and south from Mexico City. My last blog described the north route up to Zacatecas, 350 miles (550km) from the capital. This time let’s travel south to Taxco, Guerrero, 110 miles out of Mexico City, about halfway south to coastal Acapulco. Taxco has an altitude of 1800 meters (Mexico City is 2300 meters). I traveled to Taxco from Toluca by train and detoured to see a stalactite grotto, called Grutas de Cacahuamilpa, one of the national parks.

The name “de Alarcon” seems to evoke images of the ancient homeland of the Spaniards. Taxco de Alarcon is the officially adopted name of the city in honor of Juan Ruiz de Alarcon (1581 -1639), who was born in Taxco, and who studied and lived both in Spain and Mexico. In Spain, Juan had a government post but was better known as a poet and playwright, representing the Siglo de Oro Spanish writers. Taxco stages Juan Ruiz’ plays every year after Christmas. The Mexican people liked his comedies with a Latin influence. His father was superintendent of the Taxco mines and one of his brothers was a local educator.

Don Jose de la Borda Sanchez (1699 -1778), a Spaniard of French descent, arrived in Taxco at age 16. Legend has it that Conquistador Hernan Cortez discovered silver and Borda rediscovered silver here. Borda spotted a rich silver vein while riding and wandering Taxco hills and made a fortune. In gratitude and as quoted above at the outset in Spanish “God gives to Borda and Borda gives to God”, Don Jose built the most exquisite baroque Santa Prisca Cathedral, the centerpiece of Taxco (Don Jose’s son Manuel served as priest in this church), as well as schools and roads. In addition, he managed costly projects such as the Borda Garden in Cuernavaca and Casa Borda in Mexico City that cost him more downs than ups in his career and resulted in death in obscurity. Despite his good conducts, Borda is remembered as one who made his fortune by cruelly exploiting native labor.

I visited Jardin Borda in Cuernavaca almost everyday when I traveled there. It is the most elegant and restful garden I’ve ever seen. I added my name to the list of visitors, which include VIPs such as Hernan Cortez, Emperor Maximilian and Carlota and many others.

William Spratling (1900 - 1967), an American architect who was a professor at Tulane University in New Orleans arrived in Taxco in 1929. He designed Casa Manana, Cuernava for an American owner. He was associated with artist Diego Rivera in helping Diego’s exhibits in New York and he initiated and challenged in creating a silversmith workshop of his own. Gradually the artistic and economic foundation of the workshop he established continues to flourish until Taxco became recognized as the silver capital.

Today Taxco boasts 5,000 shops, large and small, embracing 400 silversmiths and apprentices in the city. I read that Tiffany’s silverware are made here. Spratling is acknowledged as Taxco’s Restorer, and the Father of Mexican Silver and honored with having his name attached to Taxco’s Silver museum. It is unfortunate that he got killed in an auto accident. Taxco's narrow, hilly and winding streets are hazardous.

While in Taxco, I took a minibus ride to the top of the hill to see a Giant Jesus statue. The bus started climbing the hill but appeared to go nowhere near the statue. The bus driver finally suggested I go out and walk to the top. I had a great view from the top overlooking the city fully of natural charm accented with colonial ambiance by red-tiled roofs.
Posted by riodan at 12:03 PM No comments: