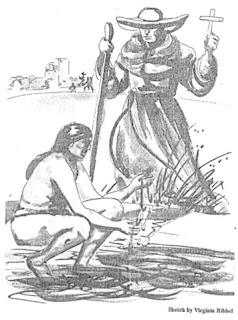 What would my San Diego friend, late historian and newspaper writer Art Ribbel and his wife Virginia Ribbel say? Perhaps, “It’s been a long time coming.” He wrote, “The San Diego River is hard by El Camino Real, the Highway of the King, one of the oldest traveled roads in America”. Virginia Ribbel sent me a special collection of Art's San Diego Union articles and I found her sketch in it of Fr. Serra. At one time, we were both residents of Carlsbad.

I remember there were two stories, maybe called “Junipero miracles.” One was Fr. Serra’s 250 mile piety trek from Veracruz to Mexico City through mountain trails. That was one of his hardest trips, which not only injured his leg permanently, but his party lost their way and found themselves starving. They found a distant light to which they were drawn. The couple they met treated them to dinner and lodging. The following day they were told there were no such good Samaritans in the vicinity. The other story told of how Fr. Serra was originally going to San Antonio Mission before he elected to head for California. San Antonio was attacked by Apaches and he would have been there. These were his life saving miracles.

Having resided in California for more than 20 years and visited almost all the missions, it is quicker to name the missions not visited. They are Mission San Antonio Padua, and Mission Nuestra Señora de la Soledad. I hope I can finally visit them on my next visit. I was lucky that my daughter’s family was in Santa Barbara. As I visited them, I was able to visit missions close by on the way.

Later they moved to Thousand Oaks and there we visited together and strolled the beautiful 4.5 acre Garden of the World across the Civic Arts Center. It has an Italian fountain, English Rose Garden, Japanese Koi pond, and what they call a California Mission Courtyard. You can go around the Courtyard to see the fabulous paintings of 21 California Missions on the walls.

Regarding the controversy of Fr. Serra, I wish to follow Pope Francis’ “rejoice” homily that Fr. Serra left his native land and its way of life. “He was excited about blazing trails, going forth to meet many people, learning and valuing their particular customs and ways of life.” Pope Francis continued “Junipero sought to defend the dignity of the native community, to protect it from those who had mistreated and abused it.” As the first Latino pope, the act of canonizing Fr. Serra is an international statement about Francis’ own identity and his role as a leader in the new world and for a new church.
Posted by riodan at 3:12 PM No comments: 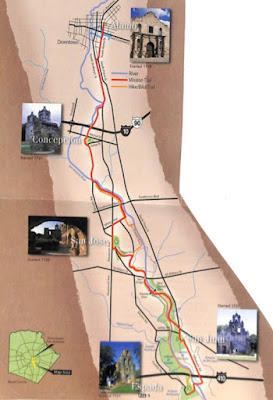 It was amazing that missionaries, perhaps two or three at first, followed the Spanish conquistadors, whether they were Jesuits or Franciscans, after the demise of the Aztec Empire in 1521. That number amassed to more than one thousand. The main path was the El Camino Real Corridor (1400km), from Mexico City up north to Santa Fe, via silver mines* such as Zacatecas, Guanajuato, San Luis Potosi, though tapering off north after El Paso. The El Camino Mesilla Corridor ran sideways from El Paso to Yuma, the El Camino Sonoran Corridor south down to Hermosillo. There is one more route – the El Camino de los Tejax, from San Antonio down south to Espada, Texas along the San Antonio River.

The name Father Eusebio Kino (1645-1711) rose as explorer/ geographer in El Camino Sonoran and Mesilla, along with Father Juan Maria Salvarierra. He proved that Baja California was not an island, by leading a land exposition. He introduced horses, cattle, and new crops such as wheat to the native Indians. He established 24 missions and vistas. The ruins of one of his missions was found close to Nogales, now known as the Tumacacori National Monument. I think I drove by the Monument when I visited Rancho Santa Cruz to say goodbye to my ex-boss who relocated there from San Diego after retirement. The city of San Antonio hosted the 2002 Toastmasters International Convention and I spent more than a week there, attending the Conference and traveling to five missions along the San Antonio River. In the 18th century, the Spanish Crown secured its northern frontier empire by creating 50 military presidios and self-sufficient mission communities in Texas. 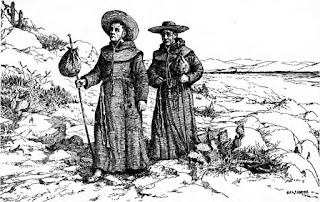 Mission San Antonio de Valero (the Alamo) was founded in 1718. By the 1730s there were several church-centered settlements along the San Antonio River. Settling into mission life, the simple hunter-gatherers of South Texas, called Coahuitecans, learned the Catholic faith from Franciscan monks and practiced agriculture.

Between 1731 and 1775, the missionaries and Indians built seven long canals, called acequias, five dams, and an aqueduct to irrigate 3,500 acres of land. By the 1770s, when the mission system began to decline, San Jose was a prosperous social and cultural center with 300 inhabitants who produced cattle and agricultural surplus. Mission Indians were the original Texas cowboys and they also defended their fortified settlements against marauding Apaches and Comanches. In 1824, the Texas missions were entirely secularized and the mission Indians, who continued to live and work in the villages along the San Antonio River, became the first Tejanos. The Alamo Mission was designated a UNESCO World Heritage site for the Battle of the Alamo of 1836. 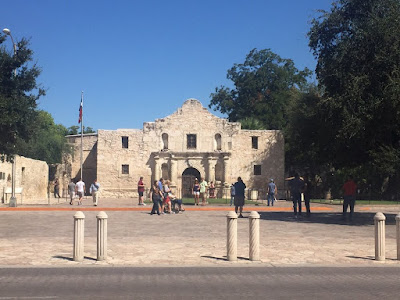 Posted by riodan at 1:54 PM No comments: